The Whole Is Not the Sum of Its Parts

The Whole Is Not the Sum of Its Parts

People often say to me, “What you're doing at Sudbury Valley School is really amazing. There are so many things that are wonderful about it. How can we incorporate some of the more important aspects of what you do into our school?” Usually these are teachers in the public school system, or in some traditional private school, who nod their heads in approval when they hear me talking about the principles and philosophy of SVS. Unfortunately, this is an impossible question to answer in the way they want, because the kind of thing we're doing here is not something that comes in separable pieces.

In fact, the situation is no different from that of our country. From time to time, people in the rest of the world look at us and say, “America is a heck of a success story. So many amazing things happen there. Even poor people in America are well off compared to the extraordinary misery and poverty of the vast majority of the world population. How can we introduce the important features of your culture into ours? What pieces of it can you isolate from the others to help us change our society?

What indeed! Can you take a repressive dictatorship and say, “Adopt these practices and everyone will be better off?” It really doesn't work that way. What such regimes have found out is that if you do incorporate some particular features of American society it doesn't really do much good, but it does a lot of harm to the power structure! For example, such governments have sometimes played with the idea of freedom of speech. They think that maybe if they give people an outlet to vent their frustrations, the pressure on the rulers will ease. What happens instead is that they find out that what people have on their minds is not “we are so grateful to our repressive government for giving us this freedom”! Quite the contrary. They demand more. Invariably those regimes shut down free speech and throw into jail those who have openly said what’s on their minds! Most people who vented their frustrations found out later that it wasn’t necessarily such a good idea to do that.

In reality, American culture does not consist of a bunch of separate, independent factors that are just thrown together. It's one whole, each part of which supports the other. It's freedom, but it's freedom for you that also respects freedom for other people, and you have to figure out what to do when people who want to be free try to limit the freedom of others in the society.

That's how the Founding Fathers came up with the notion that in order for everyone to have rights you have to set up a government “with the consent of the governed” devoted primarily to the protection of those rights. Individuals do not have total freedom to do what they want, because they can’t be free to harm other people’s freedom. You might think that the same goal could be achieved by submitting society to the rule of “wise men” who say, “We will make rules that will protect everyone’s freedoms”. That was basically Plato’s solution. In reality, what happens is that the “wise men” who are given the power to make all the rules end up protecting themselves and their friends. It always turns out that way. That's what the saying “power corrupts, absolute power corrupts absolutely” is about. But if you actually say, “All of us will jointly make the rules to protect our freedom,” then you have a whole different culture, because then you have a real check. Because if a bunch of people say, “We'll put together a clique of people who will protect our freedom and take away yours,” then “consent of the governed” enables the next round of elections to throw those people out of office and replace them with people who protect everybody's freedom. It's a self-correcting situation.

The main point is that the culture is one comprehensive whole. For example, the same freedom that's written into the Constitution to “do your thing” extends to one of the most important aspects of life: trading – the trading of ideas, of services, and of goods. Because what good is it to be free to pursue your passions if you can make beautiful objects, or devise useful new inventions, or significant new theories, but not make a living doing this without marketing them because of marketing restrictions. The idea of a free market is built into the American system and you see that in the Constitution.

That's an amazing fact, which I used to puzzle over. If you actually read the Constitution, it's sort of disappointing. You expect some high sounding principles, and what you get is line after line saying that Congress is not allowed to impose tariffs between States, and Congress has the power to determine weights and measures and a common currency for the whole country. And you say to yourself: what are these seemingly trivial things doing in a document that is the foundation of our culture? The Constitution sounds as if it’s about running a large business! Then you realize that these people did something for the first time in history, that has never been done again since then: they were drawing up the essential guidelines for a true free market on a continental scale!

The Founding Fathers saw the country they were creating as a package deal. Freedom in one person's life is connected to freedom in every person's life and to a framework for sustainability over the long run. You can't just transfer this piecemeal into another country – and no other country has had the guts to adopt the whole package. No other country in history to this day, to my utter amazement, has ever had the guts to jettison its long traditions and to just say: we're buying the entire package needed to design a free society like the one in the United States. 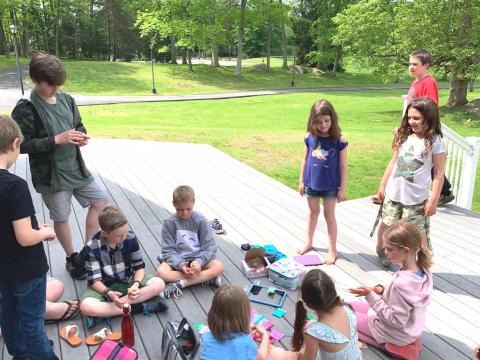 Sudbury Valley too is a package deal, meant to prepare children to live in the culture they inhabit by experiencing it in full. You cannot have children live in a controlled, autocratic, arbitrary environment for at least twelve years of their early lives and then suddenly, magically, on reaching the age of 18, be completely at home in, and committed to, a free society. The only way to make sure that this beautiful concept that has done so well for some two and a half centuries will remain in existence is to realize that the key is having children live in an environment that embraces the whole package as soon as they're able to comprehend what they're experiencing, which usually happens around the age of four. That environment is what the school is about, in a nutshell!

by Daniel Greenberg
I am always amazed at how many high school graduates have little or no idea of how everyday personal banking works. I mean, simple things like personal checking accounts. I know I didn’t. Well, that’s not the case with Sudbury Valley kids. Without… Read more ›
Monday, September 29, 2014

by Daniel Greenberg
We’ve all been brought up on the old adage, “You can’t tell a book by its cover.” The point of this well-worn piece of ancient wisdom is simple: don’t judge the reality of a situation from its outward appearance. Even if you are put off (or… Read more ›
Tuesday, May 19, 2020

by Daniel Greenberg, Mimsy Sadofsky
It’s amazing that anybody considers that what's called “a school” in the traditional meaning of the term has anything to do with preparing children for adulthood. To the contrary: it doesn't let them talk; doesn't let them move; it squelches… Read more ›