Where Does Happiness Come From?

Where Does Happiness Come From?

I confess that I wasn't thinking about happiness in 1968, when my husband and I decided to send our children to the almost-open Sudbury Valley School. We had unfortunately noticed that public school seemed to cause our little son to feel something worse than "just" unhappy, and also seemed to interfere with what he had been doing since birth—figuring out fruitful ways to spend his time. The idea that people could do that—educate themselves—was in the air in the '60's. Learning that there was in our area, in the planning stages, a school that was based on the idea that people could figure out for themselves what they needed to do to have a meaningful life, from early childhood, was a pretty wonderful—and terrifying—idea. It wasn't that easy to have the courage of our convictions, but luckily we did.

But the point is we were not thinking so much about happiness. There was too much else to think and worry about! In fact, I don't think that was even an aim for our family. Erasure of misery certainly was an aim! But they aren't necessarily the opposite of each other. What we wanted for our kids was not the absence of problems, but the ability to be a big player in solving their own problems. We got that. In fact, we got more: they became players in solving the school’s problems too.

However, it is impossible during this long, cold, snowy winter, or even truly any other season, not to see what is going on at Sudbury Valley. I have always known (and am not alone in knowing) that it is impossible for the young children in our school not to run. I am talking about inside, where it is against the rules, not outside. They have too much joy to stick to the ground! No children who aren't happy could possibly move so lightly—or cheerfully say “sorry,” and continue running, every time you point out that it is against the rules. 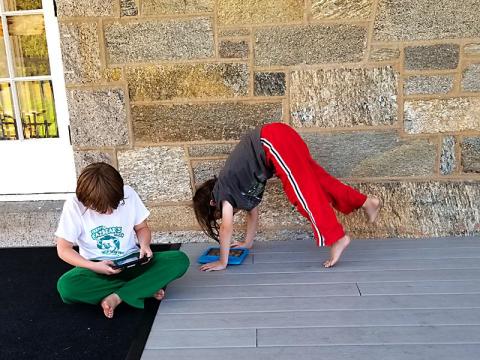 Faces that we see every day are filled with light and with kindness. A child may enroll who is just average looking. By the time they are here for a few months they exude beauty. It is no accident. They are, as a parent said to me recently, so generous with each other. She wasn't talking about money or goods, which they also very generously share. She was talking about the way that the kids in the school give each other the space to be exactly who they are. No one is ever pressured to be like anyone else. Could this possibly be true? Close enough! “Not one of them is like another”—a perfect line from Dr. Seuss. And it allows for the most active and wholesome kind of diversity one could ever imagine. Everyone can be self-actualized. Well, in the end, it turns out that a much more sober aim—treating children like fully empowered people, because here that is what they are—leads to the most beautiful atmosphere of happiness.

by Mimsy Sadofsky
Each year, the approach of December fills me with both eager anticipation and . . . dread. It is hard to make it through the Thanksgiving break without worrying about the coming month. Then December comes, and dough in quantities large enough to… Read more ›
Monday, February 1, 2016

by Foss Tighe
While I was reading Daniel Greenberg's essay (“Are 1000 Pictures Worth One Word?”) on why it has been so difficult to convey the SVS experience in film and pictures, I found myself thinking about the evolution of my own understanding about what… Read more ›
Monday, January 29, 2018

by David Greenberg
This article is reprinted from The Field, the newsletter of Fairfield School. There is a debate among educators regarding the best way to teach reading and writing. In one camp are the whole language proponents. They believe that reading and writing… Read more ›