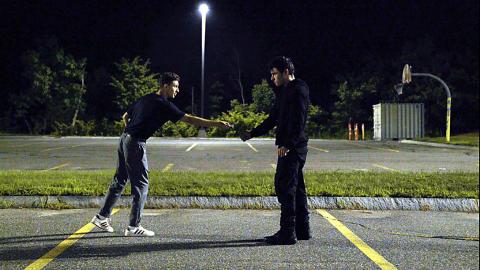 In the car on the way home from the Maynard Fine Arts Theater on Saturday, January 26, Danny and I were elated.

We had just seen the movie “Drowning in Pennsylvania”, which was written, produced and acted by Sudbury Valley students and alums. It was a substantial project that took many months and countless hours to produce. Caleb Spilios wrote the script, and Ethan Charles was the producer and the main protagonist. But many others worked to make this film, all lending their knowledge, skills, time and effort. The cinematography, the amazing music, and the acting were of a caliber that clearly showed that these young people had worked tirelessly for many years to learn and hone their respective skills to a very high level of accomplishment.

It brought to mind what Malcolm Gladwell writes in his book Outliers: The Story of Success: “The idea that excellence at performing a complex task requires a critical minimum level of practice surfaces again and again in studies of expertise. In fact, researchers have settled on what they believe is the magic number for true expertise: ten thousand hours.” He goes on to examine two examples: The Beatles, and Bill Gates. In my mind this fifty minute movie, which was made by people in their teens, showed that they have put in their 10,000 hours to teach themselves the art of film. And it was no accident that they were associated with our school. As one former student put it succinctly, “The school gave me the gift of time to let my own interests rise to the surface.”

So, all the way home, Danny and I felt that the SVS philosophy was once again vindicated by the students who made this movie by themselves. From writing the script, to composing and performing the music, producing, acting, arranging the sets, filming and editing the movie, and arranging its showing in a commercial movie theater, the whole enterprise represented an immense effort and focus over many months. It showed us again that children who are allowed to use their time at school as they deem right for themselves will grow up with many skills which they use to realize their dreams and passions. It feels good to make a place for them to do it.

by Silvia Beier
The following two scenes were unfolding recently on the different ends of one of the low red tables in the playroom, around lunchtime. On the one end, close to me, Josie sat down with her tablet and a snack, joined in quick succession by Nell on one… Read more ›
Monday, May 8, 2017

by Wendy Lement
Part 1 - The Architects Where can insects, rabbits, and snakes go when they’re sick or injured? Two young SVS students not only pondered this problem, they took action. They had a history of creating entire worlds out of sticks, leaves, rocks,… Read more ›
Monday, May 12, 2014

by Hanna Greenberg
This post originally appeared in The Sudbury Valley School Journal, volume 27, no. 5, May 1998. A young girl of nine or ten asked me to teach her math. I gave her some problems which she enjoyed doing. Next day she came to me with many sheets of… Read more ›