Learning to be a Parent of a Sudbury Valley Student

Learning to be a Parent of a Sudbury Valley Student 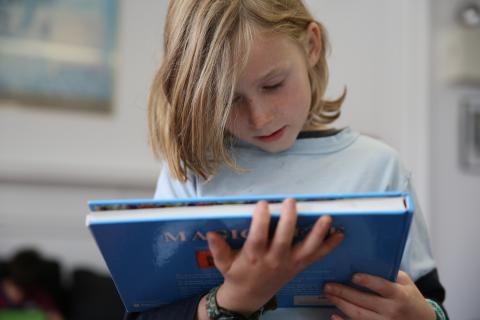 It isn't always easy to take the road less traveled. When my daughter first started attending Sudbury Valley School, she was five-years-old. Parents, friends and colleagues didn’t understand the school when I told them about it. Their questions and comments sounded more like criticism. Among the criticism questions were things like:

In the beginning, I wanted to protect Allison from the skepticism and criticism questions. I thought I had to defend the school, my decision, and my daughter. But I couldn’t yet articulate what I knew in my gut about SVS. I muddled my way through these uncomfortable conversations, citing research studies. I noticed when I talked about the school it seemed I was challenging something in these adults they didn't want to face. Maybe their own children were struggling in school, or maybe they themselves struggled, or watched friend's struggle. I came to realize it’s not my job to convince everyone of the benefits of SVS. I accepted that it was unlikely I would ever be able to convince my family and friends. I let it go. I realized my daughter would learn how to handle these kinds of comments through my example and by the examples she sees at school. By not seeking the approval of everyone around us, I was showing her that she can make independent choices that are right for herself, even when others may not understand. What could be a more important skill for parents to teach their children than that?

Today I can say to parents considering SVS, sure your child might play video games all day...sometimes. And that's ok. Maybe they’re on the path to becoming a game developer - who knows? It isn't for anyone else to judge - only the individual student. As adults we have days (months, or longer!) when we are totally engrossed in a particular project or idea. It can be highly productive, or it can allow us the downtime we need to process and manage stress. The point is - students spend their time in whatever way they decide is best for themselves. As parents our role is to trust that they will learn what's best for themselves through this opportunity.

Here's an example of my daughter’s learning since being at SVS:
My daughter started reading in preschool. We were so proud, and we thought boy what a "smart" kid we have. Nevertheless, she began at SVS when she was 5 years old. Within a few months she forgot the names of the letters and was no longer interested in learning to read. Fear and insecurity entered my mind. I watched carefully.

When she was 8 years old we were at a family Christmas party. The kids were playing Apples to Apples, and it required reading. She wanted to join in, but I knew (and she knew) she couldn't read the words. She sat at the table, and she watched, laughing and engaging with the other kids. My heart ached because I didn't want her to feel left out or different. She, on the other hand, was totally fine. Later when I asked her (probably more like demanded), "Don't you want to be able to read now?" She shrugged it off. I think the only thing that kept me from totally freaking out was that I knew she was intelligent, so I relented and did my best to trust her. I reminded myself, she would learn to read when she wanted to learn to read. I kept a lot of books around the house. We read to her whenever she wanted us to, which became more and more frequent just before the inevitable happened...

About a year later (and this is not an exaggeration), she decided she wanted to learn to read. We had been reading Warrior Cats to her at her request, and she said, "I'm going to read the next one by myself.” "Do you want help?" I asked (probably more like pleaded), and she responded, "No." The first few chapters took her a couple weeks, and occasionally she would ask about a word. A month later, she finished the book and asked for an entire set. She finished the set (3 books) a week later and asked for a second set. She became a fluent reader by working through that first book - on her own!

I know this is hard to grasp. I've spent most of my career working in public education. I get it. But I am telling you exactly what happened. My colleagues were astounded and accredited it to her intelligence. "You're lucky it worked out for her. It wouldn't be that way for other children," was a comment I heard more than once. And maybe they're right, but maybe they're not. None of us can say with certainty if that's true. Sure, there's research to point to - but there's research that supports play and natural development as well.

I want you to understand, it was me that was uncomfortable - my daughter as an 8-year-old non-reader, was not distressed by her condition.

Regarding comments about being "strange":
True confession: Decades ago, I'm certain I've said things like this myself. What a fool I was! When I hear parents’ worries about this today, I say:

Life is hard. I can't speak for anyone else, but I want my daughter to be able to stand up for herself, stand up for what she believes is right, and to be happy with exactly who she is - whoever that may be. I don't know about you, but I'm 47 years old and I'm just beginning to discover who I really am. My 13-year-old daughter doesn't suffer from self-doubt the way I do. I suppose by some standards that does make her "strange" since adolescence is considered to be a period filled with self-doubt. I have observed her and the entire SVS community to be exceptionally humane, self-aware, and globally aware. It seems to me these are exactly the qualities the world needs more of right now.

I am confident that Sudbury Valley has been the best environment for my daughter's development and overall well-being. I don't have to convince anyone of that. She knows it, and that's all that matters.

The Last Days of Our 50th Year

by Hanna Greenberg
The last days of the fiftieth birthday year of Sudbury Valley were days of fun, of laughter, and also of tears. The fun part was greeting the 35 students returning from a five day camping trip to Nickerson State Park on Cape Cod. Despite having to… Read more ›
Monday, July 22, 2013

by Dana Ortegón
I never thought that skiing would test my commitment to the Sudbury Model. But, it did. Every winter, the school offers two ski programs. Students who are eight or older can sign up to go to Wachusett Mountain once a week for six weeks. Every… Read more ›
Monday, May 7, 2018

Sudbury Valley School: Celebrating a Half Century of a Radical Approach to Educating Children

by Daniel Greenberg
For 50 years, Sudbury Valley Schools, and other schools inspired by its model, have been providing children with a place to grow like no other. Our starting point is treating children who enroll at school, from age four and up, as human beings… Read more ›