I realized that one of the kids in school who had been here for many years was about to turn eleven. (How dare she get so old?) I said, “Oh, I wish you were still 7½ .” What I meant, of course, was that the years go by too fast, and we remember enjoying the kids' younger selves even as we enjoy the time with them now.

She answered, “I don’t. I am happy with exactly the age I am right now.” What a powerful answer! I bet she has always felt that way, and I won’t be surprised if she always will. She’s certainly always happy and engaged. She knows what Sudbury Valley kids learn right down to the marrow of their bones: how to use every moment to the best advantage and how to build the person they want to become, one step at a time, often without being conscious of those steps. She has no time or need for regrets. Meanwhile, she spreads delight throughout the school. 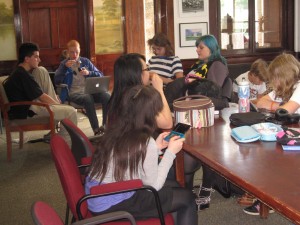 Fast forward a few weeks. I encountered another remarkable sort of empowerment, one that could not have seemed like a more different interaction, but was really of a piece with the first one. I walked into school. In the main lounge, an 18 year old boy said, “Hey, Mims! Do you play this game?” He was playing 2048 on his cellphone. I said (knowing my pathetic ability to excel at any game like that), “Sometimes.”

“Look!” he said. His screen had 4096 on it. Why did I think this interaction had any meaning you might wonder? Not because he had gotten to 4096 when I struggle to reach 1024. It was because an 18 year old kid was comfortable enough in his own skin and in the community to treat me just like he treats anyone else. “Hey, Mims!” It doesn’t get any better than that!

A few weeks later I was clomping up the office stairs with a cane. He was ahead of me holding the door. He said, “I thought you were only going to go up the front stairs for now.” (They are significantly easier – 17 instead of 15!) I said, (growl implied), “I don’t like being a wimp.” He looked at me sweetly and gently said, “It’s okay to be a wimp.”

So here you go: The 11 year old is fully empowered from the tip of her toes to the top of her head. The 18 year old is so evolved that he can treat me like an equal. And the same boy can treat me with tenderness and kindness out of respect that has nothing to do with age – only with community and the generosity that comes naturally to him. People wonder what kids at Sudbury Valley learn. Well, everything!

"Why did you choose to identify yourself with a persecuted minority?"

by Mimsy Sadofsky
I recently asked that question of a 17 year old SVS student with whom I am good friends.  I have trouble understanding the fact that several kids that I know very well who have one Jewish and one non-Jewish parent have made a conscious decision… Read more ›
Monday, December 23, 2019

Sudbury Valley and the Art of . . . Art Room Maintenance!

by Hanna Greenberg
It’s no secret that doing art is usually a messy affair. People cut and paste, use liquid paints, clay and glazes, water colors and beads, make collages with images cut from magazines, and so on. At SVS, the art room is open to all our students,… Read more ›
Monday, December 16, 2013

by Jay Flood
I’ve grown to love the interactions with the guests at Open House. It’s fun to stumble onto someone who has little or no knowledge of the school, and also to see their reaction to hearing about the model for the first time. I had a particular… Read more ›