The Things That Happen

The Things That Happen

Lisa Dolliver, a professional ceramicist (and also a professional musician), has been teaching kids all things pottery for quite a few years here. She is an amazing inspiration and teacher. I always wish I could spend every minute she is in school in the art room, but I am somehow not imaginative enough, and of course I am not hired to do that! However her students progress as if by magic.

Kali, twin sister of the Valentine Fairy, Celia, of blog fame, will be 15 in the summer – so we have known her for 9 or 10 years – is making an amazing tea set. Part of making her teapot involved pressing bark into (at least) the outside of the spout to get a somewhat textured surface. Her pot is still in process, but it will be excellent. The shape of the cover and the way it fits boggles the mind. I understood that the bark was not an odd way of making texture when I met another potter over the weekend and was stunned by her work, which includes something very different, sprinkling horse hair into the kiln at some point. It burns into the pieces, and burns up, and I think tiny bits of bark do too. The horsehair makes tiny lines; the bark makes more even marks. 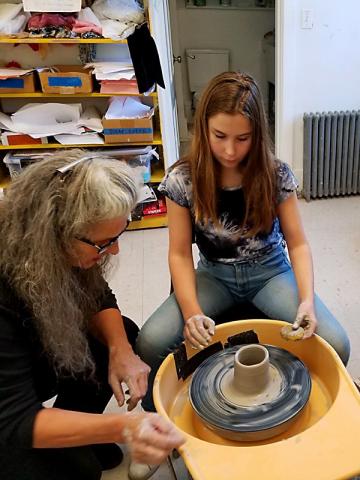 Earlier this spring – not so much earlier – Kali finished a work of love and devotion. Her mother is blind and she made a gorgeous mug for her in an amazing amalgam of blue and green. She then was able to attach to the mug before it was baked a lot of tiny pieces of clay reading “Greatest Mom Ever” in Braille – which Kali does not read, so it was a careful research project for her to transcribe onto the mug. The picture of her mom, Jen, reading the cup is one that I begged for, and got from Celia, Kali’s sister. In the picture Kali’s and Jen’s faces were so alike, and so beautiful and happy.

One might say it is easy enough to make something for your mother (it isn’t!), and it was Mother’s Day, etc. But the love for her mother was only part of the point for me. The smile on her face when she showed me the finished mug, and the concentration when I saw her working on it, relate to the care and generosity that children here put into their days.

I know this does not sound like a similar story but it is. I have some bursitis in a hip. Most of the time I can keep it at bay with occasional cortisone injections and (maybe too occasional) exercise. But my leg went very bad recently. I have had lots of broken things over the years, and happen to own two canes. One is an old-lady gray all-business cane. I also have a cool one with a nice handle and a good looking pattern on it. But we could not find cool-cane in our house. So I came to school with the utilitarian one. It definitely helps the old-lady look a little too much for my vanity.

The first time I walked down the sewing room stairs, Stephen, a young man who has been in school only a year and came to us as an “older” teen, took one look at me from across the room, and said, “Mimsy, I have a cane in my car. I used it when . . . [I don’t remember what injury, but HIPAA doesn’t allow me to reveal it anyway] and it is just sitting in the car. It has a design on it, and some stickers, and a flat handle. Would you like me to get it for you?”  “OH YES!” And he did, instantly. Now I was transformed from someone going slowly around with a cane to someone carrying a conversation piece! And if I ever find the one I had that is so similar to that, I am certainly adding the right stickers! Even my children, on FaceTime from Cambridge and Oregon, recognized and were impressed by the stickers, which say “Supreme”. I didn’t know what that was, but everyone else sure does. They told me even Supreme stickers are expensive, so I should be careful with the cane.

But it isn’t the cane. It is the 18 year old boy who immediately took one look at me and knew that I could not feel happy with my lack of coolness. It is an 18 year old boy, well-liked for his personality and kindness by everyone at school, and with nothing to gain, who was not afraid to extend kindness to me as an equal.

It doesn’t get much better than this. I don’t like using a cane, but every time I walk up or down a flight of stairs, I think of Stephen. And I feel great at whatever small part I have had in keeping Sudbury Valley a place where we are equals.

by Hanna Greenberg
It was warm outside. It was raining a lot and of course lots of kids were thrilled. Oh what fun it is to stand outside and let the pouring rain drench you! The mother in me wants to tell them to go inside and put on dry clothes, but the child in me… Read more ›
Monday, March 14, 2016

by Hanna Greenberg
The first two weeks of this school year were blessed with superb weather. It was sunny and cool and the outdoors was full of students who were using the whole campus for their myriad of activities: conversing, reading, taking walks and so much more… Read more ›
Monday, October 22, 2018

by Anika Prather
(Part 1 in The Living Water School School's “Transparency” Series)  It is late. I have just fed my dogs. Everyone is asleep and like most nights, I am the last one up and I’m usually thinking about the school. Tonight, I am thinking on parents… Read more ›