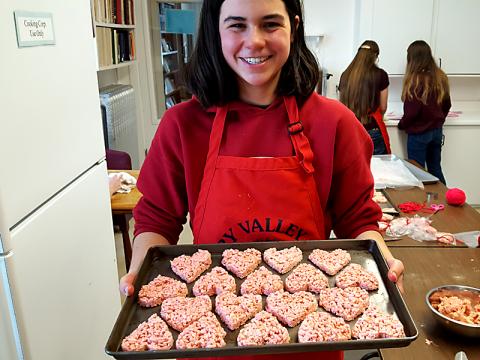 It was Valentine’s Day. There had been something afoot for quite a few days, and there were lots of valentines – simple but perfect (Cori and her friends at work) – made for people to write inside. Pink, white, lavender and red papers were involved and there wasn’t even a whiff of commerce! How do they make all those heart shapes perfect? I have tried... They were beautiful and amassed over enough of a period – maybe a week – that one had to wonder what they were going to be for.

On February 13, a ton of heart shaped pink Rice Krispie treats were produced. There must have been something satisfying about doing it because the kitchen was a beehive of happiness; the good vibes were getting all over the place. For a small fee you could buy a card attached to a treat, with the treat neatly packaged in a small plastic bag tied in red ribbon, attached one to the other, and have it delivered to someone in school. Or you could deliver it yourself. Or you could take them home. (Not as much fun, except maybe for parents who always wonder what goes on here all day.) All the school was very much a-twitter. A sizable group of teens and pre-teens had handled the organizing – including pre-sales, so that you could be sure that if there were people you wanted to send a message to they got it! This activity’s atmosphere filled the school with the beauty we can never really describe but that somehow promotes self-confidence.

Tying the whole day together with pink, rather than red, ribbon – a beautiful crown and an interesting cape – was the Valentine Fairy. The Fairy was both beautiful and wholesome. The costume made her perfect. She would enter a room and distribute treats with valentines that had been sent to the people in there. Some had simple Valentine messages – others, some to the staff, included good natured teasing: “We love you as much as you love bandanas”, was perfect for Mikel, who does actually love bandanas and wears them pretty steadily, especially on outdoor trips.

I had gone to school that morning in a questionable mood. One never knows whether a holiday will bring out the best or just the loudest in the school. Valentine’s Day can be just a candy error! Not to mention that the litter involved in the possible conglomeration of candy can try mens’ souls. This day definitely brought out the best. Everyone had seemed to work together – although surely it was only a dozen or so people – to turn the school into an even happier and more unified place than ever. Thank you everyone, but especially the Valentine Fairy. To see her was to partake of the whole activity’s glow and joy.

by Daniel Greenberg
The other day, I walked into the Dance Room Quiet Room to say “good morning” to my friends there.  As I entered, I spotted Fiona holding a delicate stuffed bird in her hand, strikingly colorful and beautiful.  I asked her what its name was… Read more ›
Monday, December 2, 2013

by Mimsy Sadofsky
I often ask myself why I am so enamored of the December ritual of making gingerbread houses (and trees) at Sudbury Valley. It is a big deal! Everyone has to put a lot of work into it. Not everyone in the school, but a much wider cross-section than… Read more ›
Tuesday, February 18, 2020

by Sara Rust
Our son recently spent two weeks visiting his grandmother in Paris by himself. It was a wonderful adventure that allowed him to explore his independence and experience the world in a new way. He had an amazing time and came back with a lot of great… Read more ›