School's a place for kids to learn. Everybody agrees to that. That's why they exist. Well, but kids learn all the time; it's part of human nature to learn. People have known that forever. The opening sentence of one of the most famous books ever written, Aristotle’s Metaphysics, starts with “all human beings are naturally curious”. He looked around, and noticed something pretty profound, and that pretty much defined how we understand what it means to be alive as a human being. We're always curious. We're always probing. We're always learning. We always want to know about the world. We see that in toddlers, especially. What the terrible twos are, in fact, is when a child is old enough to start taking everything apart, in order to find out how it works. And they never give up until you force them to stop, when they start destroying your home.

So the thirst to learn is something inherent in every living person. But how do they learn? Aside from probing, one of the most important influences on them – if not the most important – is what the people around them are doing. They look around, and they clearly are thinking to themselves: I want to be able to do what that person is doing. They hear people talking, and they want to make those noises that seem to elicit responses. They see people walking, and they want to walk too, and they work really hard at it. Why? Because they're absolutely determined to become like the people who take care of them. They want to grow up. They want to be able to maneuver their environment so that they can do the things they want to do effectively. 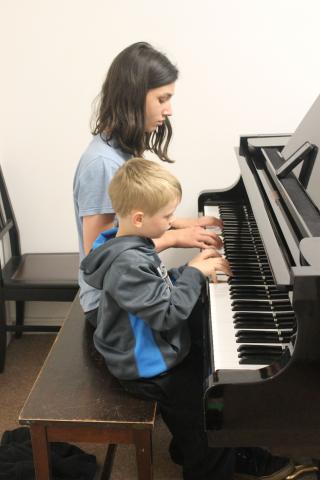 Learning from people who are older and more accomplished at something – that's what we all do all the time. In fact, it was basically the only way people really learned intricate stuff until schools were formed about 150 years ago. Until then, you learned through apprenticeship, and you started on your path by looking around and trying to mimic what's going on around you. You attached yourself to somebody who is really good at something, you followed them around, but you tried to figure out how they do things. If they accepted you and thought you were being helpful, then they let you participate in what they were doing until you became good at it and were able to go out and do it on your own. Pretty much everything that people now go to school to train for was learned that way. If you wanted to become a doctor, there was no medical school; you apprenticed yourself to a physician, and you started from the bottom up. You sat in his office, then you watched what he did with his patients, and how he did it. Slowly, if he thought you were competent, and if he thought you really cared, he would let you do little things here and there, until you finally became qualified enough to do it yourself under his supervision, and then finally on your own. You became a painter that way, you became a carpenter in that way, you became an architect that way, you became every kind of specialist that way – by learning through watching skilled people who were more advanced than you, and to whose expertise you aspired.

That's the normal way to learn. To be able to learn in the way humans have evolved, you have to be free to watch the people around you who are more accomplished and better at things, and to figure out a way to relate to them, to get their acceptance and attach to them. That's the history of the world. That's the way things have been done from time immemorial. And that's the way things are for the most part done in the real world today, outside of school. It's the way kids grow up outside of school. It's the way adults get better and better at their jobs. How do you advance in a job? You do not advance in a job by limiting yourself to contact with other people who are at your level. You advance in a job by observing people who are good at it, and trying to get better yourself.

The essence of learning is communicating with, seeing, following, interacting with, and trying to learn from, people who are good at the things that you aspire to. I don't think anybody will dispute that. Except that's not the way schools are organized. The way schools are organized, they stick you in a grade where you're surrounded just by people who are your age, and generally at or near your level. What sense does that make? The whole scenario of mixing with, seeing, learning from, people of different skills doesn't come into play. In fact, you could almost say that segregating children by age in schools is the antithesis of learning. It puts you in a situation where as long as you're in that classroom, the only person that you can turn to for anything substantially beyond where you are is the person standing in front of the class, the teacher. And that's not much of an advantage if you want to make it in the world. You want to be able to mix freely with people of a wide variety of ages, a wide variety of interests and skills, find out what they're doing and how they do it. You can't do that if you're age-segregated. From kindergarten through high school, you're not given the freedom to interact with kids or adults of different ages and different skills to learn the things you want to learn – at least not in school, the purported place you go to learn what you need to have a productive life.

And that is not education. It's something else. It's regimentation, it's control, but it's certainly not providing an environment where children can grow up and discover their interests by interacting with the world in which they will function as adults. It's the opposite of education. And yet it's called “school”. And that makes no sense at all.

by Jean Cote
This post was written by our Office Manager, Jean Cote. Recently, I had the opportunity (privilege) to introduce a calculator in all its glory to a young, inquisitive student for (I don’t know it to be fact, but it seemed to be) her first time.… Read more ›
Monday, October 10, 2016

by Lauren Ligotti
The school year has started with a bang! Students and staff are excited for activities and work to begin. The amount of fundraisers we recently had is a good indication of it! Now that it is the beginning of October, all of the corporations for the… Read more ›
Thursday, January 27, 2022

by Mimsy Sadofsky
We often hear people talk about Sudbury schools as "unschooling schools". Besides the fact that the actual phrase, to me, does not even make sense, I think the people who use it overlook a lot of dissimilarities that are important keystones as to… Read more ›