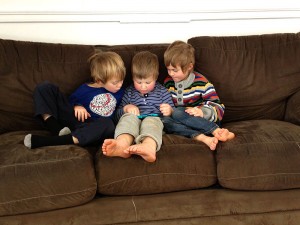 She gave the photo the title "Men at Work". At first sight, the title seems whimsical, though the photo itself is a perfect gem.

I couldn’t stop thinking: is there more than whimsy to the title? And it got me pondering the meaning of the word "work". The dictionary defines it as "productive activity". But the more I considered it, the clearer it became to me that, like so many other words, its meaning has undergone major transformations over time.

For thousands of years, people considered all their activities to be productive. Everything they did was seen to contribute to their survival. As soon as a child was old enough to contribute something beneficial to the community, s/he was enlisted to help. There was no gender or age discrimination. There was also little coercion. It was assumed that children want to grow to be adults who contribute to sustaining the community, and therefore will welcome opportunities to learn how to do that. In general, people of all ages were expected to do their share for their own good and for the good of their community. Spontaneous activities were considered no less productive than others, since they contributed to the overall well-being of the individuals concerned, and thereby to the community as a whole.

The Industrial Revolution changed all that. Machines dominated the scene, and what they did was the primary productive activity of industrialized societies. Work came to mean anything that contributed directly to industrial output, and that in turn was highly standardized, not subject to deviation or spontaneity. "Playing around" was detrimental to the improvement of the condition of society or of the individual. “To play” came to mean "to do something in sport that is not to be taken seriously".

Our post-industrial Information Age has freed human beings from the tyranny of standardized and routinized activities, leaving those to be managed by the new information technology. The distinction between productive and non-productive activities has vanished. Anything to which people voluntarily turn their minds contributes to their growth and deepens their understanding of the world around them. There is no longer a distinction between "work" and "play".

Look again at the photograph. Don’t you see "men at work"? I do.

Note: This piece was originally published on August 4, 2014.

by Mimsy Sadofsky
I have puzzled for a long time about a phenomenon that I encounter daily at Sudbury Valley but did not have a way to put into words. I didn’t know it was “ownership.” And I never realized how profoundly important ownership actually is! We talk about… Read more ›
Monday, March 9, 2015

by Hanna Greenberg
I happen to love watching the NBA play, especially the finals, in which only the best of the best compete with each other. The skill, power and grace displayed in these games is amazing to me. The games at SVS are quite different, but oh so… Read more ›
Thursday, October 13, 2022

by Mimsy Sadofsky
As they decide whether or not to send their children here, or as they fret about their children while they are enrolled here, there are a whole series of concerns parents talk about and worry about that are related to what looks like the random way… Read more ›