Our son recently spent two weeks visiting his grandmother in Paris by himself. It was a wonderful adventure that allowed him to explore his independence and experience the world in a new way. He had an amazing time and came back with a lot of great stories.

One of these stories was about the strong suggestion he received from his grandmother that he complete some kind of "project" in school, preferably involving learning the French language. She repeated this request to us in a subsequent phone call.

When we first chose to send our kids to SVS we knew that there would be those in our circle of family and friends who would, at best, not understand or, at worst, think we were crazy and endangering our kids' once bright futures. As we repeatedly explained the Sudbury ideals and philosophies, we found we were met with very little resistance. At first. There were quite a few people, including my mother-in-law, who expressed the wish that such a school had been made available to them when they were young. How different their lives would have been. How much happier.

But as the months and years began to roll by we started to hear those words that all Sudbury parents have become familiar with, "But what are they really learning?" We try to explain that, while not the traditional structured, curriculum-based learning they are used to, the children are learning valuable lessons that will serve them well as they move through the world. We tell them that when the kids come across things they want to learn or feel they must learn they will seek out that knowledge with vigor and passion. Most are still skeptical.

When Dash arrived home from Paris we sat with him and asked him all about his time there. "Where did you go?" All over Paris with a side trip to Lisbon, Portugal. "What did you see?" Many exciting things. "Did you learn any French?" No. Wait, what? My mother-in-law, who feels it is so important for him to learn the language of his heritage that he should create for himself a grand project at school, did not attempt to teach him any French? He was immersed in the French culture for two weeks with a native speaker at his side and he was not asked to attempt to communicate in French? How could this be? Didn't she say she wanted him to learn the language? 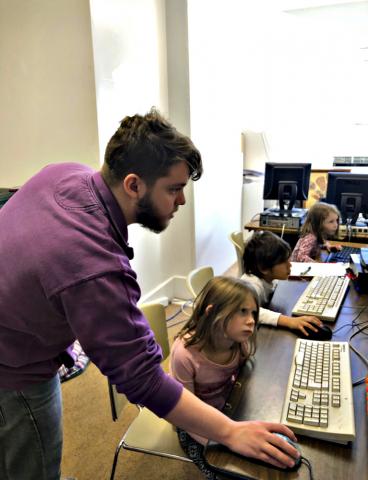 And then it became clear to me. My mother-in-law subscribes to the commonly held belief that learning and teaching are something that happen in a school. At desks. At a prescribed pace. With books and #2 pencils. Her heart is in the right place. She loves her grandchildren and wants the very best for them. She just sees education as most of the world sees it.

One of the things that has always been very clear to me about the Sudbury model, at least for our family, is that learning is a lifelong, all day, every day endeavor.

There will never be a better community or resource for learning the French language than the streets of Paris and one-on-one, 24-hour access to a native guide. He learned and experienced so many valuable things while he was there. We hope he will be able to return next summer and expand upon it. And in a few years, his sister will follow. Maybe they will learn some French.

by Daniel Greenberg
Everyone has heard the aphorism, “To get the right answers, you have to ask the right questions.” Much energy has been expended on trying to discover how to formulate “right questions” in any field of endeavor. But people seldom give much… Read more ›
Tuesday, April 23, 2013

by Mimsy Sadofsky
On the radio a couple of weeks ago, I heard a man talking about educational reform, and what they consider progress made with young children’s education in Illinois in recent years.  He talked about a goal, which he called “agency."  The… Read more ›
Monday, June 17, 2019

How do SVS students get into college?

by Foss Tighe
It started with the 12-year-old girl down the street who told my daughter she would never get into college. I am sure many of our friends, who were devoting untold hours to ensure that their children excelled in public school, wanted to say the… Read more ›