Let's put on a show

Let's put on a show

I’m a sucker for live theater. It’s all magical to me, whether it’s a Broadway show or a local production. So when I went to see “An SVS Musical” last June, I had no doubt that I would be entertained. I knew the actors. I’d heard snippets of the songs and the plotline. And, more importantly, as a member of the larger SVS community, I consider it my sworn duty to love any and all of its creative endeavors. (Or most of them, anyway.) 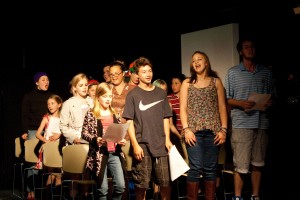 I was, in short, not an impartial reviewer. That said, I thought it was great. Better than “Cats.” And, I wanted to see it again and again. (And I did....)

I thought the musical was amazing on several levels. First, by the fact that it was, like all Sudbury Valley endeavors, driven by student interests.

“An SVS Musical” was conceived almost two years ago by a group of students. They wrote the script and the score, began fund-raising, and proceeded to bring their work to the “stage,” even after some of the original group of authors graduated. In the fall of 2012, they held casting calls, assigned roles, and set to work finalizing the script. By last spring, they were rehearsing, and eventually they enlisted limited the help of other people in school to polish the musical numbers, build sets, and train a lighting crew.

With three co-directors keeping everyone on track, the musical survived all the hiccups that can accompany a theater production:  Cast changes. Creative differences. Technical difficulties. The three co-directors had to make sure that the rehearsals were on schedule, that actors learned their lines, and that all the necessities of a production were chugging along. Which isn’t to say that people didn’t show up late -- or blow off a rehearsal on occasion. But when that happened, their peers said, “Not cool. Don’t do it again.” And mostly, they didn’t.

My second favorite part of "An SVS Musical" was its plot. More than a mystery, more than a romance, more than a musical comedy, it was a window into an aspect of school life that non-School Meeting members rarely have an opportunity to experience: the judicial process. This process is laid out before us: the allegations, the pursuit of evidence, the continued digging when testimony didn’t add up, the charges, the pleas, and even the referrals to School Meeting for an inordinately amusing sentencing procedure.  In this case, Jayne said that Tommy had pushed her into the pond, a very serious accusation. As the JC hears testimony, we see the event in a Rashomon-like fashion, from each of the parties involved, as well as from witnesses.  The facts eventually emerge after a lot of laughs, trauma, and romance.

On a deeper level, because the judicial process is the centerpiece of the musical, I felt like it allowed all SVS students to feel like they were “part of the play.” After all, it was about their school, their experience, the inside jokes they got before everyone else in the audience.

And finally, "An SVS Musical" hit a homerun by delivering catchy songs, laugh-out-loud jokes, and luminous performances by its actors.

I don't know if there will ever be another production of this particular musical. Or if there will be an entirely different one some day. I'm just glad I had the chance to see "An SVS Musical" on its first run. 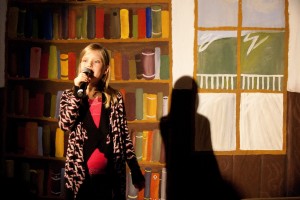 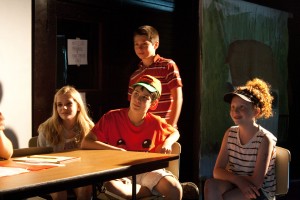 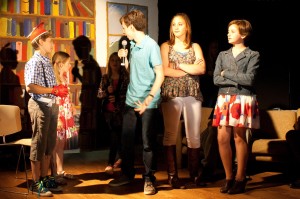 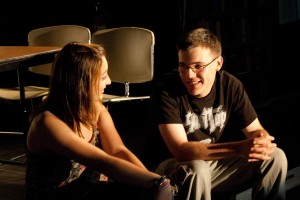 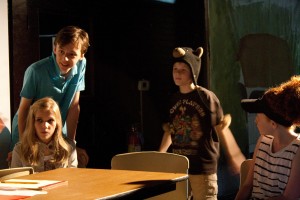 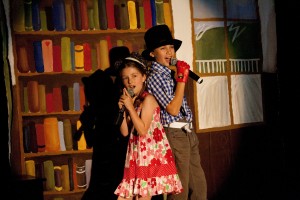 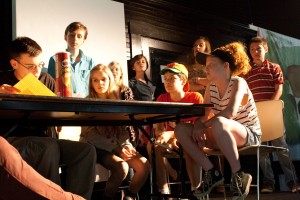 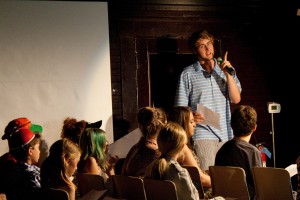 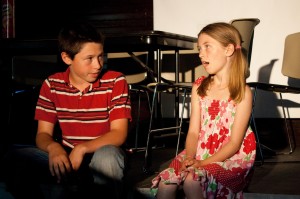 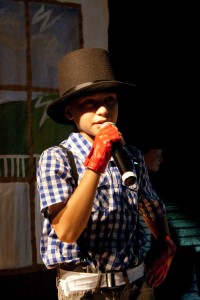 Senate Confirmations, Donuts and the Price of Justice

by Foss Tighe
Last week I found an example of “life imitating life”. Or more specifically life at SVS was imitating life in Washington. I am fascinated by the quirky details of democratic institutions. So, I got a little thrill when the 50-50 vote in the Senate… Read more ›
Monday, August 15, 2016

by Hanna Greenberg
Pulling off a one-person art exhibit, from creating to matting to hanging, takes a lot of different skills. Obviously, one has to have produced a body of work which they feel is good enough to show in public. Hannah had done just that. During her… Read more ›
Monday, October 6, 2014

by Hanna Greenberg
At Sudbury Valley, we often celebrate weddings. Some are simple impromptu games, and others are elaborate ceremonies, like the one we had in mid-September outdoors on the back lawn, on a beautiful bright day. What I liked about this wedding was the… Read more ›