The following two scenes were unfolding recently on the different ends of one of the low red tables in the playroom, around lunchtime. 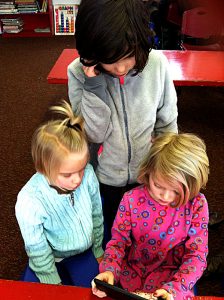 On the one end, close to me, Josie sat down with her tablet and a snack, joined in quick succession by Nell on one side, Myles and a couple of friends on the other side, and a bit later, Adelaide. Nell and Adelaide got interested in what was happening on Josie’s tablet.“What’s Josie doing,” I asked Nell. “Playing Minecraft” says Nell. “She has a mushroom house!” It must be quite something, because she, Josie, and Adelaide, got completely absorbed in the house.

Meanwhile, on the other end of the table, down on the floor, Zawna and Avni had moved the wooden playhouse closer to the blocks, and were developing and furnishing their house with everything they could think of. “We can even have a TV,” they excitedly exclaim, and then they built an outdoor playground including - if I remember correctly - a balance beam. I have to say “if I remember correctly,” because - as you can see on the pictures, most everything is made out of our simple, beaten up wooden blocks, so what you and I can see there is likely nothing compared to what the two of them were creating in their minds. 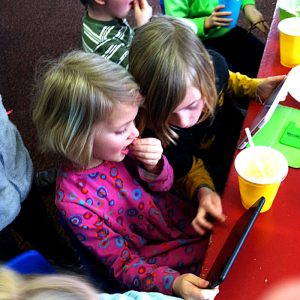 While Zawna and Avni were in their creative zone down on the floor, Josie had gotten some support from Myles with an internet connectivity issue. After that was taken care of, the three of them continued to observe with great intent Josie’s mushroom house. The look of professional appreciation on their faces impressed me - these are connoisseurs, they know what they are looking at! I on the other hand obviously am not, because when I got to look at Josie’s mushroom house later, I didn’t see it. All I saw was blocky shapes. “You know, everything in Minecraft is made out of squares,” Josie explained. Her mushroom house is made out of mushroom material, or blocks, harvested from several rectangular mushrooms Josie had encountered earlier, some brown, some red and white flecked, all a very far cry from the fairy tale illustration mushrooms I had conjured up in my mind when I heard “mushroom house,” and was expecting to see on the screen. Josie showed me the dance room in her house: “It’s downstairs, it’s very small, you have to shut the door so you don’t fall out!” Everybody giggles. Hmm. I guess I just learned a few things.

First of all, I learned that computers are not replacing other forms of creative play in children, as I too have sometimes feared. Both forms of playing house I witnessed involved a great deal of imagination. The mushroom material blocks on the screen were not that different from the real blocks Zawna and Avni were handling on the floor, and while I had somehow assumed that the screen images world would be overwhelmingly elaborate, they were in fact rather stark, requiring a child’s mind to come alive. 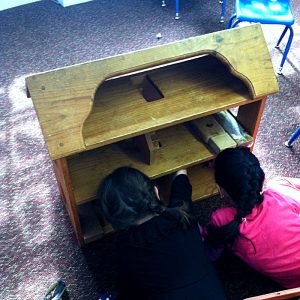 The toy house and the blocks, I saw, can exist side by side with the tablet, with the children being quite able to ignore as well as transition between the different media with ease. Rather than altogether discarding ‘older’ forms of play (blocks) in favor of new technology (tablet), it seems to me that children now are busy adapting to the complexities of their world by using everything there is, today’s tools together with all the other existing material around them. It’s a good thing the brain is adaptable. It looks like a big job to me.

I also learned that a computer in the room does not need to mean a decline in social activity. Avni and Zawna had locked minds together in a close developing and building collaboration unperturbed by the lure of the screen, and Josie, Nell, and Adelaide were gathering in what can perhaps be described as a “collegial review” mode, both complex social interactions. Needless to say, all this did not happen in isolation: next to both house builders, seated at the table, was a group of similar aged children, Myles and two friends, eating lunch and conversing, and a little bit further away sat a group of teenagers playing a card game.

I am still thinking about how I was just sitting there eating my lunch, while around me, in a setting of simultaneous open-ended interactions, the next generations were gearing up to tackle the challenges of living life in the 21st century, which from the looks of it requires the ability to navigate complex situations, a great deal of imagination, and facility in use of technology and social skills... Oh yeah, and food, which I can happily report everybody in the room managed to enjoy too!

by Mimsy Sadofsky
It was Valentine’s Day. There had been something afoot for quite a few days, and there were lots of valentines – simple but perfect (Cori and her friends at work) – made for people to write inside. Pink, white, lavender and red papers were… Read more ›
Monday, March 31, 2014

A new feel for our Open Houses

by Daniel Greenberg
Private schools host Open Houses to attract new families. We started having them about 10 years ago - a little late to the game, because we had been using a host of other methods to spread the word and bring in new students. But we figured: everyone… Read more ›
Monday, October 6, 2014

by Hanna Greenberg
At Sudbury Valley, we often celebrate weddings. Some are simple impromptu games, and others are elaborate ceremonies, like the one we had in mid-September outdoors on the back lawn, on a beautiful bright day. What I liked about this wedding was the… Read more ›