On "Bringing People Up"

On "Bringing People Up"

When we at SVS say that we are “bringing people up”, it can mean anything from bringing up a person in a conversation to bringing up our kids according to certain principles. At SVS, “bringing a person up” (i.e., filing a complaint against someone with the Judicial Committee) has a meaning that morphs and changes as the student brings people up, and is brought up by others, in a maturation process under the laws of the community. That journey is, in many ways, the most important one people take at SVS, and the metamorphosis of one’s understanding of the concept of “bringing people up” is a wonderful thing to observe.

The story here at school goes that the 5-year old said to the 4-year old, “I’ll bring you up”…to which the 4-year old replied, “I’ll just come right back down!” These first encounters with the words usually come in this kind of mild threat. Once these youngsters are actually brought up and summoned to the Judicial Committee, it doesn’t take long for them to understand how the wheels of JC turn; and how the system can also work to their advantage.

This takes us to the 5 and 6-year olds who now fully understand that bringing people up is a two-way street and that it can be used against someone; like an older kid, for example, or even an adult staff member. Well, that’s quite a power, isn’t it?…rather like a giant cudgel! Peppered in the talk of these folks are veiled threats of bringing people up, and eavesdropping on these conversations is sometimes like watching a car accident in slow motion. The leverage that the statement bears on any situation is carefully weighed against the credibility of the case being levied by the complainant. Watching these spats turn into court cases is never dull. The complainant quickly learns that having evidence, witnesses and an understanding of the laws are all pretty important things to have a handle on. Often a case brought to JC backfires; as counter claims surface, the executioner finds his head on the chopping block. 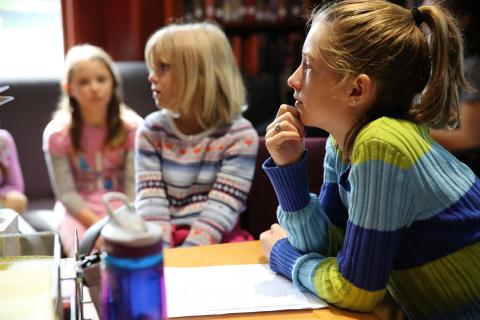 But JC is merciful to these young students of justice. Though the committee is an ever-changing group of people of all ages drawn from the community, JC is uniformly considered reliable for finding fair outcomes and for adjudicating with a firm and noble hand. This nobility shines through even the youngest people, and there is nothing that stirs the group more than seeing it in the words and manner of a 7-year old who is called to serve and takes her seat seriously. It’s as if each person, when summoned to the table, brings their best out of a reverence for the process; and in so doing the group becomes ennobled. The JC’s findings are carefully reviewed by the School Meeting among whose primary duties it is to delve into each case weekly, and to make the laws and discuss all the complexities of justice at school.

By the age of eight or nine, an SVS student has a sense of jurisprudence which is often highly developed. Over the next years, as 10,11, and 12-year olds, they continue to experience many court cases as complainant, JC member, and defendant; and many study law to become clerks. They understand their rights, and they are sensitive to when these are infringed upon. Their judgment has advanced to where they realize their actions have an impact on the community, and that they are responsible for the school and for protecting the rights of others.

It’s interesting to see a 13-year old transferee, airlifted from public school, break a rule and get brought up for the first time. It’s a confusing experience for many of them who have only dealt with the arbitrary rule of public school justice. Being judged by young people can be baffling. There is nothing for them to rail against and no cohorts to rally in resistance. Having nothing to rest on, their crime often turns into vanity in their own eyes. The transformation which takes place in them is a beauty to behold as they learn that they are respected in the community.

By the age of 14, SVS students are finding agency in their comprehension of the world. They have learned to navigate the culture through activities and endless conversation, and they understand what it means to be a good citizen. They take command of opportunities left in the wake of the graduated class. They have found a voice through speaking up. The world is telling them that they are strong when their actions and their words are aligned with the morality they have internalized. At this point, they are often in advance of many adults in their power to communicate and reason. A case in point occurred in my first month as an SVS parent when the “Assembly”, made up of parents and School Meeting members, met for the last time and took the historic action of voting itself out of existence…my first vote at SVS! Amid the complaints from many parents who felt a loss of control in the motion to dissipate their own influence, a 15-year old girl stood, as one descended from the Senate in Rome, and delivered a speech on sovereignty that slayed any argument. I found myself asking, “Who is the adult here?” The eloquence of her words reassured me that we had put our young daughters in the right school.

The maturity of 16, 17, and 18-year olds at SVS is seen in their ability to separate what is best from what is easiest; often this test comes in the form of the ethical dilemma embodied in the Preamble of the Law Book which states that a School Meeting member must inform the community of actions which threaten “the atmosphere of freedom, respect, fairness, trust and order that is the essence of the school’s existence.” Whereas, under the public school paradigm, such a rule can be seen as snitching on one’s friends; and indeed many adults see the law in this way too, having, perhaps, been themselves brought up to believe that their actions are somehow separable from the impact that they have on the community; we find the most heart-wrenching cases at SVS from the breaking of this rule, including the ones which bring a person’s trustworthiness into question. These cases mostly result in a “referral” and take the form of lengthy discussions in School Meeting. Most public school kids never experience such things since they grow up in an autocratic system where agency has no place; it is the pure principles of fairness on which the laws of SVS are built that make them so inseparable from the virtue of the community. 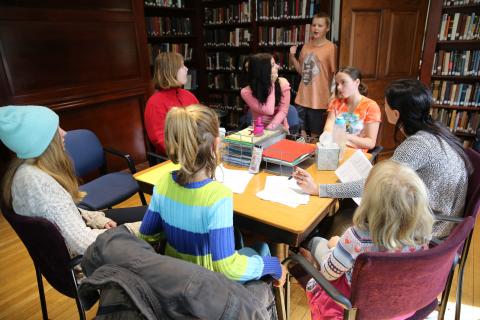 This struggle with ethics and politics, experienced through the process of “bringing people up”, is at the core of how SVS produces elite people. The depth of the learning can’t be measured by any tests, except those in which one’s path in life are set; or by those actions which take courage and conviction: in telling someone hard news, in standing up for something against adversity, in responding to happenstance from a grounded center. SVS kids are beacons of light in a world that is often shrouded and murky, and they stand as testaments to a model of schooling, and of culture, which fosters a virtuous circle of respect that has stood the test of time.

by Hanna Greenberg
It isn’t often that young children talk about their struggles with ethical or psychological issues, but there is no doubt that as they grow and live in a community they grapple with such issues. Since they usually don’t have abstract conversations… Read more ›
Monday, February 13, 2017

by Silvia Beier
Especially at the beginning of the school year, a new student, or somebody who has just not gotten around to it before, might ask about what’s the deal with the books at school. They might want to know if you can borrow them, and how that would work… Read more ›
Monday, May 6, 2019

by Anika Prather
Anika Prather The Living Water School, Fort Washington, Maryland This has been the year for me personally, as a mom and as a school founder, to fully mentally and emotionally grasp that kids do not need our help to learn. It took these almost 4… Read more ›