Why Bullying Is So Rare at Sudbury Valley School

Why Bullying Is So Rare at Sudbury Valley School

People often ask if there is a problem with bullying at Sudbury Valley School given that all these kids of all different ages are mixed together in a seemingly haphazard and unordered way. I tell them that bullying is quite rare; to which they often respond, “How is that the case?”

I think the answer to that question comes down to one word… “Culture.” It is culturally unacceptable to bully here. There are a number of reasons why that is the case. In order to understand this statement, let’s first look at public schools and the culture of bullying that has persisted there. What does a system that promulgates bullying look like? How would you construct such a system?

Well, first, you would put the students into an environment where they have no say over anything: where they can be, who they can interact with, what they must do, and what they will learn. Restrict their movement and speech and subject them to top-down, authoritarian rules over which they have no say. Next, divide them by age so that a thorough examination and comparison of each can be made, and split out all those who don’t fit the “ideal model” the authorities have described. Next, put an adult in charge of their progress for a year at a time to make sure they master all the curricula in which even the adult cannot claim expertise. Lock them in a room seven hours a day, five days a week for years on end. Then, test and grade them according to government guidelines.

What could go wrong?

Also, spend hundreds of billions of dollars per year to hire more and more administrators to make more and more tweaks and demands in an attempt to fix a perpetual “educational crisis”.  Believe the pleas they make that the ballooning expenditure is for the good of the children, and support their right to six-figure salaries. Have these officials pressure their subordinates to pressure the teachers to pressure the students. Put failing students into IEPs (Individual Education Programs) to correct their insufficiencies at the cost of their self-esteem. Design programs that have nothing to do with what the students see as useful to their future. And then, when someone doesn’t want to play along, punish them at will to set an example.

What we are left with is the individual in opposition to the system. The two are at odds. There is no respect among kids for a system that disregards their personal autonomy. There only exists fear of retribution in such cases. The system is itself the bully and perpetuates bullying as the modus operandi of the paradigm under which life operates. It follows logically that the “my-way-or-the-highway” mentality would seed the minds of the students and that they would organize themselves into oppressor/oppressed relationships and troops. There is no recourse for a student being bullied in such an institution other than to enlist the help of the very bullies who sit atop the system. And these administrators are not inclined, equipped or instituted to act as defenders of students’ rights.

How then would you create a system within a school that is fair and equitable? What would an institution based on these principles look like?

Well, first, you would have a governing body made up of everyone in the community. All the laws would be agreed upon by majority vote where everyone’s voice could be heard in the debate from the youngest to the oldest. The rules would apply equally to everyone, adult and student alike, and anyone could file a complaint against anyone else if they felt their rights were infringed upon. You would institute a court where cases would be heard before a jury of one’s peers, and adults would not have the right to impose arbitrary punishments on anyone. Sound like something that would change the attitudes of the children? Next, you would make it so that no one could tell the students how to use their time. There would be no separation by age. There would be no “teachers” or classrooms: no curriculum, no grades and no tests. 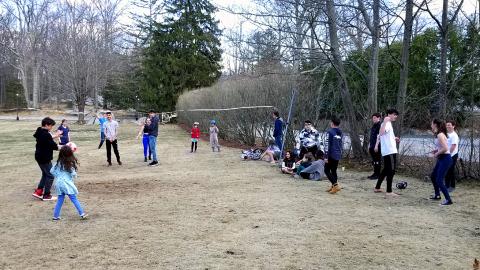 by Hanna Greenberg
Musicals and plays happen at all schools. It is always a big deal to produce them, what with numerous rehearsals to arrange, costumes and props to procure, and finding the talent in the student body to perform all the roles, big and small. What was… Read more ›
Tuesday, May 30, 2017

by Hanna Greenberg
“It’s fun to have fun, but you have to know how,” said The Cat In the Hat. It seems to me that Dr. Seuss, who obviously understood children, nevertheless, like most adults, was blind to the ability of kids to extract pleasure out of any place or… Read more ›
Monday, July 18, 2016

by Hanna Greenberg
It isn’t often that young children talk about their struggles with ethical or psychological issues, but there is no doubt that as they grow and live in a community they grapple with such issues. Since they usually don’t have abstract conversations… Read more ›