What is a Fiftieth Anniversary at Sudbury Valley?

What is a Fiftieth Anniversary at Sudbury Valley? 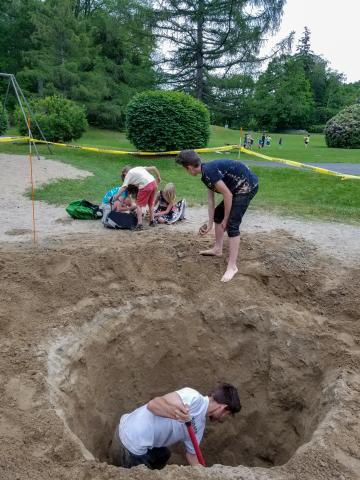 Well, first of all, it miraculously not only starts on the first day of our fiftieth year of existence, but keeps going through two full years. After all, 1968 is when we opened our doors, so many of us feel . . . might as well make it two years. Maybe we will figure out a way to make it a decade eventually, but that would be a little harder.

The last day of school this year was in many ways a summation of all that we are and the traditions that grow through the years. It isn’t that there are so many traditions, so much as that everyone is free to take part or ignore all or any of them, and it makes life here smooth. The students that we have either are all amazing people, or being together brings out the best in every one of them. The seamless way the kids of different ages interact is absolutely natural.

I got to school at about 9:30. The front porch was carpeted with various kinds of water guns, because that is one of the traditions. Water IS fun, and there used to be unruly people (like me) who took any opportunity for a water squirt any time of year. So the School Meeting, disturbed also by water being taken in dripping anythings from inside the school to outside, institutionalized “the” waterfight, a tradition on the last day of school. This year it looked like there would be more equality of arms than other times. Some years there are buckets, gigantic superblasters that most people cannot even carry when full, and also – cups. I only saw one squirt bottle (my kind of water gun), and empathized with whoever it belonged to. The blasters seemed more equal in size and also more able to be carried when full by non-supermen!

The day went on. It was still relatively peaceful inside. Everyone was pumped up for the big event, until the other big events started happening. (The waterfight starts at noon.)

Before noon, Sebastian started digging a hole in the sandbox. He is very strong and very fast! The area was roped off for safety, and when Ansel came he became second in charge. The hole was deeper than Sebastian is tall, and he is tall. Someone who has never been here asked if the bottom of the sandbox got harmed by the digging and suddenly I envisioned a different kind of sand area, but that is not the kind of sandbox ours is. I said no it would just go through to China.

I don’t remember when the hole digging started. The “rule” is you can’t leave a hole overnight, of course. I do remember 20 or so years ago when Brian used to be the organizer of the Big Dig. Maybe the originator, but surely the organizer. He usually had a big cooler full of drinks and sometimes other stuff – you have to feed and water your diggers. But no matter what Brian always did/does things in style. I remember Brian, well-dressed, as a supervisor and organizer, and my memory also is that year after year after year, even after Brian graduated and the tradition was carried on, some boulder would be in the hole that could not be raised by mere man power, but was gotten out by one of those simple machines they used to tell us about in physics class. Staff would be summoned. All the gigantically strong students and staff would cooperate. Once out, the boulder did not go too far: it was heavy and became a decoration for some part of the campus. Meanwhile, a large group of people were watching the hole. Why? That’s what we do here. How else do you become someone who makes things happen?

And then the fire engine came and we had a fire drill, right in the middle of all the important activities – yearbook making, wrapping final pottery pieces to take home, getting a last part of the D&D game into gear; trading lunches; setting up for the water fight. So we all ran to the barn for a roll call, as our fire safety procedure dictates. Luckily for us, the fire chief realized it was the last day of school and made the drill short, because calling roll in that tumultuous set of people in the barn would not have been the quiet procedure it usually is!

It was not a warm day – what fun is a water fight without a little shivering – and suddenly the warriors had their attention divided. The big event was about to take place at the hole. People had stopped watching from the perimeter and were lining up.

When the hole was properly deep, and with Kevin’s permission and watchfulness, a ladder entered the hole. By then many kids (some dripping!) were in a line. But it turned out they were in line to go down the ladder, dip their feet in the Pacific or whatever is at the bottom, and come back up again. Lines are serious here. We don’t have a lot of them, but they are very respected. I saw a little child who would have preferred being with her friends go to the end and wait. I wish I could explain how beautiful the whole thing was, from the first sight of Sebastian with the shovel, to the end of covering up the hole. It was once more one of the events at SVS that seem choreographed

People were making yearbooks. This year no group took charge of making bound, empty, yearbooks for sale to those who wanted them, or displaying and printing pictures. And yet. Everyone made themselves a bound yearbook from paper, and most of them seemed to have a good collection of photographs. How? I don’t know. My photos only see the light of day on a computer or phone! These guys were prepared, and as the day went on the idea spread, so many people who had no pictures made yearbooks and asked that others sign them for later photos. It was the last day of our (first) 50th birthday!

by Mimsy Sadofsky
Today I was engrossed in contemplating how difficult it is to tell the “bad guys” from the “good guys”. I have had that trouble since I was a little girl watching cowboy movies. It wasn’t that I didn’t have some clue that Roy Rogers, or the Lone… Read more ›
Monday, February 3, 2014

by Hanna Greenberg
Hanging the photo exhibit on Friday, January 24th proved to be an exhilarating experience for me. It goes without saying that the photos are varied in their subjects, beautiful and interesting. What else would one expect from kids at SVS? They are… Read more ›
Monday, December 19, 2016

by Mimsy Sadofsky
An Open Mic is a scary thing to organize. After all, the success of the endeavor depends not on who says they want to sing, or play a song, or dance, or do an act, beforehand, but who actually steps up and does it at the time it is happening. In a… Read more ›