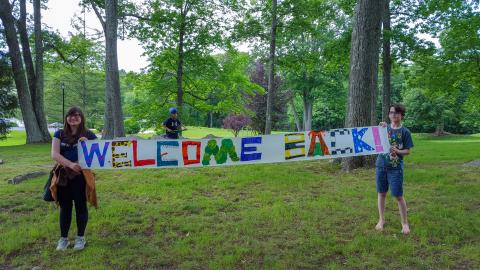 Every year, a large group of kids from Sudbury Valley decamp (literally) on the next to last week of school to Nickerson State Park, in Brewster, on Cape Cod. While writing this I was waiting (as was everyone else who didn’t go) for them to return. The Welcome Home picture shows it. They usually arrive between 3PM and 4PM, exhausted, but with lists of chores to do before they can go home. Some have made sure they showered daily, no small trick there; others are pretty darn dirty!

This year, for what may be the first time ever, Hanna didn’t go. I personally cannot imagine how one could have fun there without her! No one liked that, I think Hanna least of all. But it is right that new people learn to solve the “Hanna problems”. Clearly they managed!

For those of you familiar with Massachusetts June weather, almost nothing except snow can be a surprise. Nickerson camping groups have survived floods which innundated tents drenching everyone’s garments, sleeping bag, etc.; steady rain (less fun but less disruptive); and the biggest crop of disgusting gypsy moth caterpillars in the known world. Usually, not all of these happen in the same year – but years with at least one of two of those things are not at all unexpected. Sometimes the tents are drenched on departure day, and they can’t even be put up to dry til when they get home until the weather gets better. It is part of the lore to have survived these things. This year they definitely made camp in the rain, but things were spring-like since then, I think. (Not summer-like of course.)

As for the temperature? Well, think Boston in June, and then subtract about ten degrees.

So it is the rare trip to Nickerson that is warm and sunny. Back in the really olden days, in the first decade or so of the school, I had the privilege of going a few times when it was basically just what you would want in the way of weather. In the mists of memory, there is not even any mist in my memories! And gypsy moth caterpillars had not yet turned New England into. . .well, I  won’t say the word here. So we only had the normal camping things to think about.

And we used to drive down – wait for it! – in cars belonging to staff and students, so we went everywhere in caravans. It only makes sense that there were probably only about thirty or so people in the first few years, or the caravans might have been too long. And we often (staff had them!) were accompanied by very young children, who gave everyone a lot of joy, and added a level of distraction.

We almost all went into the icy ocean. [The only person I ever remember seeing suffering from hypothermia happened to be my oldest son – he had sturdier friends who stayed in the cold-cold water past what was sensible for a child born in Texas, who wanted to keep up with the “tough” Wilsons], we went and bought ice cream in Orleans – maybe later that same day. We used to do it every year – we swam in the not-quite-so-icy gorgeous ponds in the park every single day, rain or shine, ocean or no ocean (it is quite a park!), and often at night, and enjoyed the area around the ponds. Kick the Can was best in dusk and dark – Greg Richard was always a star at it!

We made intriguing (I knew there would be a good word to describe them) meals, with very modest personal equipment, and ate them in one of the lovely pavillions that dot the park. Dinty Moore beef stew was a star item for some people. There were always chores every day, or at least after the very Wild Wild West beginning years. We sat before the fire and roasted our hot dogs and marshmallows, and we basically did what SVS people do almost all the time. We talked and talked and talked and talked. New friends were made; confidences were exchanged; advice was sought; new social groups formed. And then some of us went to bed from exhaustion. None of the kids were ever exhausted until they came home on Friday.

We used to go to Provincetown each year, on Thursday, just as they do now, and then at the end of the afternoon, we would drive to the incredible dunes in Truro, where it was very much like a private dune park. Every person, young and old, slid down as many times as they could climb back up.

I will never forget that bliss, and every time I drive to Provincetown, I am very sorry that those dunes had to be closed to humans because of changes in the shape of the sands. It seemed to be an important part of the camping trip, and I feel like it was a yearly event for a long time. To me, when I first saw them and for many years thereafter, it seemed like an immutable part of Cape Cod. It wasn’t at all. (Although for those willing to hike quite a bit, there are plenty of usable dunes in Provincetown, but that is more for family trips. We still do that in our family.)

Probably “spin the bottle” was played at the beach on the next to last night, but no one will tell me – I was always a grown up!   And for the last night they usually saved “truth or dare.” Finding out about truth or dare eventually – more than 45 years later, so secrecy went a long way – led to not being able to play it anymore. [Our rather innocent kids turned out to be too well-supervised by parental watchfulness over cellphones, etc., etc., to be able to be allowed to test the edges of their innocence in this way.] I feel happy that I never knew what the heck my kids were doing.

Anyway, every trip was different, but every trip is the same. SVS kids do not like change in school or in school activities. The storms last winter that caused the clam shack at our favored ocean beach to be destroyed had an effect: no food at Nauset! So they went to a different beach. Of course the people are different each year, the groups that form are different, the friendships that happen from all those late night intense conversations are often new ones, and they last through the years. Most kids who have been to Nickerson during their lives at school will be still talking about the trips 50 years from the experience.

As I was finishing writing this, a dad who had been a student for a good ten years in his youth, walked into the office where I was typing. He said he could still smell Nickerson, feel in his heart everything he had ever felt there, remember every experience. It is etched into his life. Soon his son will be going.

by Daniel Greenberg
School's a place for kids to learn. Everybody agrees to that. That's why they exist. Well, but kids learn all the time; it's part of human nature to learn. People have known that forever. The opening sentence of one of the most famous books ever… Read more ›
Monday, June 6, 2016

by Hanna Greenberg
It was warm outside. It was raining a lot and of course lots of kids were thrilled. Oh what fun it is to stand outside and let the pouring rain drench you! The mother in me wants to tell them to go inside and put on dry clothes, but the child in me… Read more ›
Tuesday, May 30, 2017

by Hanna Greenberg
“It’s fun to have fun, but you have to know how,” said The Cat In the Hat. It seems to me that Dr. Seuss, who obviously understood children, nevertheless, like most adults, was blind to the ability of kids to extract pleasure out of any place or… Read more ›