The Art of Doing Nothing

The Art of Doing Nothing

"Where do you work?"

Doing nothing at Sudbury Valley requires a great deal of energy and discipline, and many years of experience. I get better at it every year, and it amuses me to see how I and others struggle with the inner conflict that arises in us inevitably. The conflict is between wanting to do things for people, to impart your knowledge and to pass on your hard earned wisdom, and the realization that the children have to do their learning under their own steam and at their own pace. Their use of us is dictated by their wishes, not ours. We have to be there when asked, not when we decide we should be.

Teaching, inspiring, and giving advice are all natural activities that adults of all cultures and places seem to engage in around children. Without these activities, each generation would have to invent everything anew, from the wheel to the ten commandments, metal working to farming. Man passes knowledge to the young from generation to generation, at home, in the community, at the workplace — and supposedly at school. Unfortunately, the more today's schools endeavor to give individual students guidance, the more they harm the children. This statement requires explanation, since it seems to contradict what I have just said, namely, that adults always help children learn how to enter the world and become useful in it. What I have learned, very slowly and painfully over the years, is that children make vital decisions for themselves in ways that no adults could have anticipated or even imagined.

Consider the simple fact that at SVS, many students have decided to tackle algebra not because they need to know it, or even find it interesting, but because it is hard for them, it's boring, and they are bad at it. They need to overcome their fear, their feeling of inadequacy, their lack of discipline. Time and again, students who have made this decision achieve their stated goal and take a huge step in building their egos, their confidence, and their character. So why does this not happen when all children are required or encouraged to take algebra in high school? The answer is simple. To overcome a psychological hurdle one has to be ready to make a personal commitment. Such a state of mind is reached only after intense contemplation and self analysis, and cannot be prescribed by others, nor can it be created for a group. In every case it is an individual struggle, and when it succeeds it is an individual triumph. Teachers can only help when asked, and their contribution to the process is slight compared to the work that the student does.

The case of algebra is easy to grasp but not quite as revealing as two examples that came to light at recent thesis defenses. One person to whom I have been very close, and whom I could easily have deluded myself into thinking that I had "guided" truly shocked me when, contrary to my "wisdom," she found it more useful to use her time at school to concentrate on socializing and organizing dances than to hone the writing skills that she would need for her chosen career as a journalist. It would not have occurred to any of the adults involved with this particular student's education to advise or suggest the course of action that she wisely charted for herself, guided only by inner knowledge and instinct. She had problems which first she realized and then she proceeded to solve in creative and personal ways. By dealing with people directly rather than observing them from the sidelines, she learned more about them and consequently achieved greater depth and insights, which in turn led to improved writing. Would writing exercises in English class have achieved that better for her? I doubt it.

Or what about the person who loved to read, and lost that love after a while at SVS? For a long time she felt that she had lost her ambition, her intellect, and her love of learning because all she did was play outdoors. After many years she realized that she had buried herself in books as an escape from facing the outside world. Only after she was able to overcome her social problems, and only after she learned to enjoy the outdoors and physical activities, did she return to her beloved books. Now they are not an escape, but a window to knowledge and new experience. Would I or any other teacher have known how to guide her as wisely as she had guided herself? I don't think so.

As I was writing this another example from many years ago came to mind. It illustrates how the usual sort of positive encouragement and enrichment can be counterproductive and highly limiting. The student in question was obviously intelligent, diligent and studious. Early on, any test would have shown he had a marked talent in mathematics. What he actually did for most of his ten years at SVS was play sports, read literature, and later in his teens, play classical music on the piano. He studied algebra mostly on his own but seemed to have devoted only a little of his time to mathematics. Now, at the age of twenty-four, he is a graduate student in abstract mathematics and doing extremely well at one of the finest universities. I shudder to think what would have happened to him had we "helped" him during his years here to accumulate more knowledge of math, at the expense of the activities he chose to prefer.  Would he have had the inner strength, as a little boy, to withstand our praise and flattery and stick to his guns and read books, fool around with sports, and play music? Or would he have opted for being an "excellent student" in math and science and grown up with his quest for knowledge in other fields unfulfilled? Or would he have tried to do it all? And at what cost?

As a counterpoint to the previous example I would like to cite another case which illustrates yet another aspect of our approach. A few years ago a teenage girl who had been a student at SVS since she was five told me quite angrily that she had wasted two years and learned nothing. I did not agree with her assessment of herself, but I did not feel like arguing with her, so I just said, "If you learned how bad it is to waste time, why then you could not have learned a better lesson so early in life, a lesson that will be of value for the rest of your days." That reply calmed her, and I believe it is a good illustration of the value of allowing young people to make mistakes and learn from them, rather than directing their lives in an effort to avoid mistakes.

Why not let each person make their own decisions about their use of their own time? This would increase the likelihood of people growing up fulfilling their own unique educational needs without being confused by us adults who could never know enough or be wise enough to advise them properly. 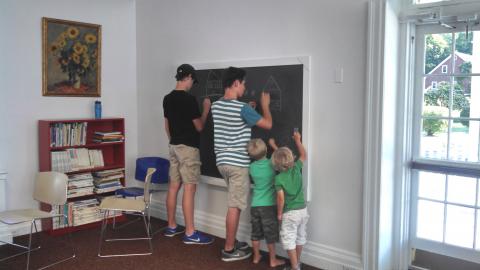 So I am teaching myself to do nothing, and the more I am able to do it, the better is my work. Please don't draw the conclusion that the staff is superfluous. You might say to yourself that the children almost run the school themselves, so why have so many staff, just to sit around and do nothing. The truth is that the school and the students need us. We are there to watch and nurture the school as an institution and the students as individuals.

The process of self direction, or blazing your own way, indeed of living your life rather than passing your time, is natural but not self evident to children growing up in our civilization. To reach that state of mind they need an environment that is like a family, on a larger scale than the nuclear family, but nonetheless supportive and safe. The staff, by being attentive and caring and at the same time not directive and coercive, gives the children the courage and the impetus to listen to their own inner selves. They know that we are competent as any adult to guide them, but our refusal to do so is a pedagogical tool actively used to teach them to listen only to themselves and not to others who, at best, know only half the facts about them.

Our abstaining from telling students what to do is not perceived by them as a lack of something, an emptiness. Rather it is the impetus for them to forge their own way not under our guidance but under our caring and supportive concern. For it takes work and courage to do what they do for and by themselves. It cannot be done in a vacuum of isolation, but thrives in a vital and complex community which the staff stabilizes and perpetuates.

by Jay Flood
Ever since I started teaching music composition at a conservatory, I’ve been comparing the progress of the college students with the Sudbury Valley School kids I’ve observed in my time as a staff member. In each case, they are trying to work out… Read more ›
Monday, January 1, 2018

The Many Levels of Gingerbread

by Lauren Ligotti
The month of December always feels rushed, but in a good way. Students are more amped than usual. They are excited for Christmas, parties, and especially making gingerbread houses. Mimsy organizes a few days to make gingerbread houses before the… Read more ›
Monday, October 9, 2017

Lost Over the Summer

by Foss Tighe
Summer vacation is over and on the way to school I make my now predictable joke. “Did you complete your assigned summer reading? How about that social studies diorama for Danny?” My kids smile and roll their eyes. My mind drifts back to when my… Read more ›