Writing: One of the "Three R's"

Writing: One of the "Three R's"

I was talking to a friend of mine a while ago. He's a college professor at one of the local universities, and he was talking to me about the different educational backgrounds that the kids who came to that school experienced and how it affected them. He told me that the one big difference that he found between people who had gone to your typical public school and people who had gone to elite private schools is the superior quality of the writing from those who attended the latter. It got me thinking about writing at Sudbury Valley and how kids learn how to do that.

I wouldn't say that there are no kids at all who actually set out to learn how to write as a specific goal. Those who do, go about it the same way that most people do. They prepare material, they show it to various people, they discuss it, and then they make corrections and move on from there. But I don't think that's the norm. Yet, at the same time, our experience has been that frequently, kids who have spent their lives at Sudbury Valley actually turned out to be quite effective writers. I got to thinking about how that worked. How is it that somebody can spend their time here, you never see them writing anything, and yet, within a very short time of entering college, for example, they're able to write papers that get A's? 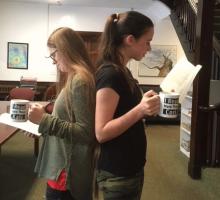 One of the things I realized when I thought about it was that a lot of what happens at Sudbury Valley, primarily because of the democratic environment, involves having to make a case for why you think a particular course of action should be followed instead of something else. Of course, in order to do this, you have to put your ideas together in an order that makes sense and figure out how to articulate them. You also must figure out how to predict the sorts of objections that other people are going to come up with and how you're going to address those objections. It turns out that when you're trying to decide something in a meeting, you do that all the time. And that experience of doing that sort of thing regularly on a day-to-day basis develops the skill of being able to organize your thoughts and put them together in a coherent way. Once you have that skill down, figuring out how to do proper punctuation and spelling and that sort of thing is a relatively easy thing to learn.

Excellent writing comes from clear thinking, and clear thinking comes from practicing communicating your ideas to other people. It's just another way that kids at Sudbury Valley, seemingly doing nothing in particular, learn naturally to do the things that people spend a lot of time trying to figure out how to teach in a traditional environment.

The virtues of failure

by Daniel Greenberg
If I had to choose one topic to place at the very core of every child's educational experience, I would have no trouble identifying it: how to deal with failure. Yet, this is the subject most assiduously ignored in traditional mainstream schools. On… Read more ›
Tuesday, March 17, 2020

by Dana Ortegón
Being a Sudbury Valley School parent presents unique challenges. For one, when there’s no honor roll, varsity team, or Gifted & Talented Program, it takes awhile for you to figure out how to brag about your child. “Sally got down from Big Rock… Read more ›
Tuesday, November 23, 2021