I want to talk about something called “the zone of proximal development”, an idea developed by Russian psychologist Lev Vygotsky early in the 20th century. He felt that people learn best when either they are learning from somebody who knows a little more than they do, or they are teaching somebody who knows a little less than they do. You may (theoretically) be on level three and you're learning very excitedly from somebody on level four, while somebody on level two may get to level four probably before you are, because they're excited about what they're hearing from level four and also what they're hearing from you on level three. It's an interesting theory and it does not clash in any way with what we see here at Sudbury Valley School. We just don't analyze learning that way. An easy way to think about it, if you have anyone in your family who plays video games, is excited running through the house shouting “I got to level 5!” 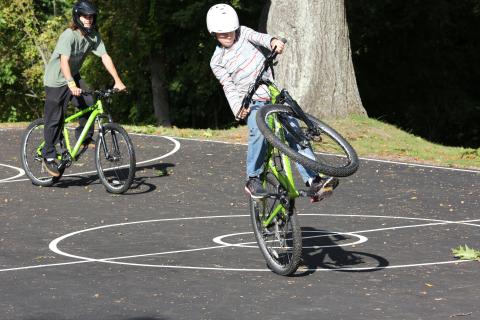 The fact is that when you see a child who is concentrating on something, they're usually concentrating on something either alone or with a friend or with a group of friends, and that group of friends is very likely to have people in it of several ages, who fall into their zone of proximal development. They all learn from each other. That is what we all do. Occasionally we may talk about scaffolding.

When you think about your own life, that is also true of you. It's certainly true of me. I learn from people who know more than me, and when I tried to teach something to someone who knew less than me, I inevitably got a better picture of it and learn more from that. What's interesting to me is that here this spring, we haven't been talking at all about the zone of proximal development, but we are sadly in the midst of a pandemic, and most of the staff is a little bubble of people of all ages and experience working together in the school on various different projects every day. It’s our pod. Each of us has a lot of time to talk to people who know more than we do about something, and to people who know less than we do about something, and we're all learning from each other. It’s a cool bubble. So every day, when a person arrives for the day, we are really glad to see him; it doesn’t matter how many times we have seen him that week. And I think that that's the way kids feel about their friends. They want and need those older friends and they need and want those younger friends and those same age friends, because it makes the mental mix so much more exciting for everyone.

by Dana Ortegón
I never thought that skiing would test my commitment to the Sudbury Model. But, it did. Every winter, the school offers two ski programs. Students who are eight or older can sign up to go to Wachusett Mountain once a week for six weeks. Every… Read more ›
Monday, May 13, 2013

by Kristin Wilson
Ever since my older kids started at Sudbury Valley, I have faced the challenge of talking to “outsiders” about the school.  Most people tend to be relatively polite and merely give me a quizzical look when I talk about how the school works.… Read more ›
Monday, April 11, 2016