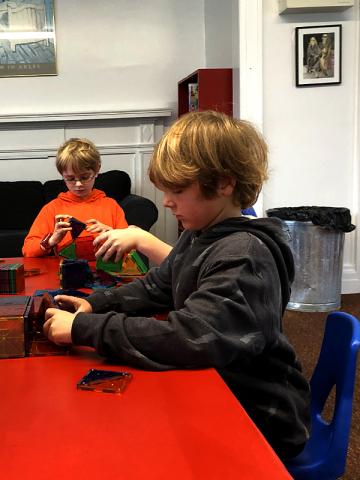 [reprinted from The School Bull, Informal News about The Clearwater School]

This is the poem my son wrote to accompany a three-foot tall, three-dimensional art project he created while listening to music. This was the kindergarten project I had dreamed of, an integrated curriculum teaching music, art, emerging writing and literacy through a single creative activity. My son’s poem was amazing. I believed his teacher had found a way to tap his artistic and poetic genius.

Driving home with the masterpiece in the back of the station wagon, I wanted to know what about the music was so interesting. What had inspired such a moving poem? My son sighed. “Well, I just thought Elizabeth would like the sound of those words.” I was confused. “The song she played was alright, but I was building a dinosaur habitat. I wanted her to be happy and I had to do the art so I could finish my habitat before clean-up time.” My heart sank.

Trains, dinosaurs, Pokemon, Legos, ancient civilizations. This is the progression of my son’s key interests in life to date. Kindergarten was the age of dinosaurs. Every day construction was under way for a new exhibit at the dinosaur museum that doubled as our home. Extensive research was required and our dinosaur library grew. My son’s career goals shifted between paleontologist and paleo-artist.

Most weekday mornings, I woke to the sound of scissors shaping construction paper. It turns out the wings of the pterosaur are too short and replacements need to be made. The creations would continue as showers were taken, breakfast was made and eaten, and school lunches were packed. Eventually it was time. The three-minute warning would be given. Whining isn’t the word to describe his objections, rather full-on exasperation. “I’m not ready.” “I never get to finish.” “Why do I have to go to school five days and I only get TWO days for me?” “It’s just not fair and you don’t understand.” ”But, but, but….ohhhh…wwhhhyyy?”

My moment of clarity came the week after my son created the remarkable poem and collage strictly for the benefit of his teacher.  We were ten minutes into our morning struggle ritual. I told him to put down the glue and get his shoes so we could leave for school. His body tensed, he clenched his six-year-old fists, looked me in the eye and asked through clenched teeth, “Don’t you see I don’t have time for this?” My heart sank, again.

I did see. “This” that he didn’t have time for was school. It interrupted his real work, requiring him to jump through hoops before he could return to his primary purpose in life, dinosaurs. Kindergarten was not a good use of his time and at age six, he knew it.

Years earlier, I had heard of schools that extend freedom and democracy to all students. My immediate reaction of a skeptical raised eyebrow was counter-balanced by a strong attraction. I imagined kids must experience power and true learning in such an environment. I had read books and newsletters and talked with parents and educators about the Sudbury model and other “free” schools. I remembered a warning from my son’s preschool teacher. “Adults need to make the decisions for children so they will feel secure and know that someone will take care of them.” I thought about my son’s poetic expressions and art and was struck that he, in fact, had created them so that his teacher would feel secure. This was not at all the school experience that I wanted or needed for my son. Clearly (as he had been telling me every morning for months) it wasn’t what he wanted or needed either. We scheduled a visiting week at The Clearwater School.

Here was a school that students could bring their entire selves to. For my son this included bringing a spinosaurus skeleton to his visiting week. With the help of students and staff, he constructed it one day and painted it the next. When this masterpiece came home in the back of the station wagon, his pride was radiant. There was no written poem to accompany it, but the verbal recount of the creation process could fill pages. It wasn’t a musically inspired project, but he found his rhythm while creating a display for the spinosaur. What I valued in a school remained the same, but my interpretation of emergent curriculum, integrated academics and hands on learning shifted. We enrolled for the next fall.

My son is now eight and is this year joined at school by his five-year old sister. She doesn’t have a strict lineage of interests the way her brother does. She rarely complained about going to preschool and certainly didn’t express that it was a waste of her time. While she is strong and self-determined, she isn’t so visibly pained when her work of playing cheetah family is interrupted. It saddens me to think that if she were my older child, I might not have been motivated to find Clearwater for her. She bypassed the kindergarten experiment as I have learned that my children don’t have time for the “this” that traditional school offers and requires of them. They will tailor their own education at The Clearwater School, learning exactly what they want and need to know without having to give up their passions.

by Daniel Greenberg
Sudbury Valley has just begun the 2017-2018 school year – and an exciting one it is! This will be our 50th year of operation, the half century mark for what was once a “far-out” experiment. Born in the tumultuous 1960s, SVS was destined to outlive… Read more ›
Monday, July 1, 2019

by Luis Gustavo Guadalupe Silveira
For many centuries, philosophers and scientists have been debating human knowledge: its nature, limits and origin. On this last point, we still are trying to understand how much the human being is born knowing and how much he discovers… Read more ›
Monday, November 7, 2016

Competition and Cooperation at Sudbury Valley

by Silvia Beier
From my teaching days, there is a particular moment I remember with special sadness: It’s the moment in the semester when everything kind of closes up, and it happened without fail just a few weeks into the school year, coinciding directly with the… Read more ›