A few months ago, my kids were planning a big sleepover of SVS students at our house. Besides the usual suspects, there was one new name. I immediately start asking what I thought were the key sleepover questions: Did they like frozen pizza? Were they vegan, vegetarian, Kosher or gluten free? However, most important to my daughter was that I was aware of the new guest’s preferred pronoun. I learned it was they/them.

When I was in the very liberal Lincoln-Sudbury Regional High School, I hung out with a group of friends in an un-used classroom that was painted green. Much of the rest of the school referred to us collectively as “The Green Room Fags”. This was not part of an attempt at re-appropriation or reclamation of the word “Fag”. It was definitely meant in a derogatory manner. We were outliers in various ways so it is possible that we were more tolerant of diversity than much of the school. But at the time I was aware of only one gay person in our clique. 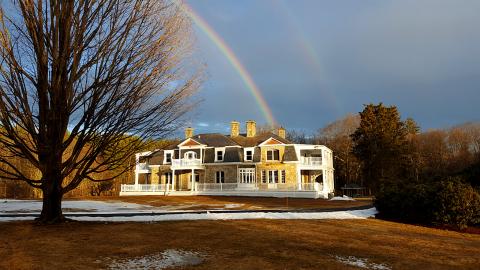 I was impressed how, for my kids at SVS, there seems so much less attention drawn to someone’s sexuality or gender identification. I suspect that LGBTQ students are far more comfortable at SVS than they are in most high schools.

Why is this? Does the Sudbury Valley School have a specific goal of supporting or at least providing special protections for LGBTQ students? You will not find a single mention of LGBTQ rights in the SVS lawbook. The school has no special rule protecting LGBTQ rights regarding use of public facilities (bathrooms). Of course, that is simplified because all the bathrooms at SVS are singles and have no specific gender assignment.

I believe that the LGBTQ friendly nature of SVS arises out of the simple school principle that each member of the community is free to express themselves, learn and socialize in whatever manner pleases them as long as their doing so does not infringe upon the rights of other community members to do the same. The entire school’s legal and decision-making process is built on this principle. In fact, many cases heard in the school’s judicial system revolve around “infringement” of one student’s rights by the actions of another. Infringement might be someone crushing another kid’s sandcastle in the sandbox. It could also be excluding someone from activities or verbally harassing someone based on their sexual orientation or gender identity. Long time school staff, Daniel Greenberg, has written extensively on the alignment of the school operation with the founding principles of the United States. So, while kids talk about “infringement”, I think of the “pursuit of happiness” as in the Declaration of Independence’s “life, liberty and the pursuit of happiness”. SVS enshrines everyone’s right to the pursuit of happiness as one of its most fundamental principles. Oddly, the school's principles prevent the school from “explicitly” teaching about the founding principles of the United States, or LGBTQ rights unless a student asks. 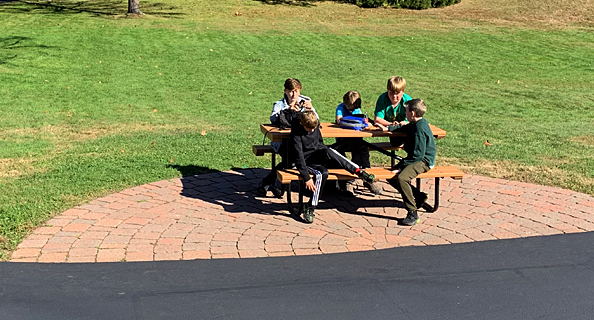 There is abundant literature produced by the school about the importance of the founding documents of the United States and the philosophy of the school. But that literature is addressed more toward people outside SVS than toward the students. What I find fascinating to watch, is that kids learn about how this works much more organically. They hear about kids being “brought up” before the Judicial Committee for “infringement”. They have things done to them that they feel shouldn’t be; they write a complaint or they complain to an older kid, or a staff member who then helps them write a complaint to submit to the Judicial Committee. They end up serving on the Judicial Committee on a rotating basis (similar to jury duty). Before long, it is second nature for students to assume the main purpose of the legal system at SVS is to maintain the delicate balance of over 100 people simultaneously engaging in their pursuit of happiness.

From the parking lot on a warm sunny day, as I watch dozens of kids energetically engaged in various activities, I can feel the vigor with which they are all pursuing their happiness. And they do it with the confidence of knowing that they can express who they are in any way that works for them (and does not restrict others from doing the same).

For the author, building sand castles is an important part of happiness.

by Silvia Beier
The following two scenes were unfolding recently on the different ends of one of the low red tables in the playroom, around lunchtime. On the one end, close to me, Josie sat down with her tablet and a snack, joined in quick succession by Nell on one… Read more ›
Monday, April 14, 2014

Snow tubing: A tale of patience, persistence, and pizza

by Hanna Greenberg
Sometimes what you wish for has consequences that you wished would not bother you. A case in point is the way SVS students who enrolled when they were very young tend to grow up to be persistent -- and capable of getting what they want. So, quite… Read more ›
Monday, March 14, 2016

by Hanna Greenberg
The first two weeks of this school year were blessed with superb weather. It was sunny and cool and the outdoors was full of students who were using the whole campus for their myriad of activities: conversing, reading, taking walks and so much more… Read more ›