Dan: Recently, a group of alumni on their own initiative decided to celebrate the 50th anniversary of Sudbury Valley School, and invited all alumni from everywhere in the world to come and join them. Amazingly, almost 200 alumni came, of all ages and from all the years the school had existed.

Mimsy: It was a very warm and charming event – partly because of the atmosphere created by the planners, who were ebullient, but mostly because the alumni who came were really happy to be here. Many exclaimed, “Oh, it looks so good here!” It does look good here, but it probably looked good here when they went to school too.

Dan: To me the most interesting thing about the day's event involved one of the concerns I had about it when it was being planned. The school has thousands of alumni. I was concerned that only a few people would show up from each person's immediate friend group from the time they were here, and I didn't know how that would go down. Indeed that was the case. But the atmosphere of age mixing at Sudbury Valley prevailed, even in the alumni event!
It was such a great example of that facet of the school. It was amazing to see people who had been here in the 1970s, the 1990s, and the 2010s, all mixing. They were all really happy to be with each other, to sound each other out, to find out what each other was doing, and what their experience at school had been like. It was really a re-creation in the large of the same feeling that you feel in the school: complete respect for each other regardless of age, regardless of what they were doing. They had one big thing in common: that they had all had a wonderful experience here, and that here was where they had the space and the time to develop their real passions and prepare themselves for successful lives. 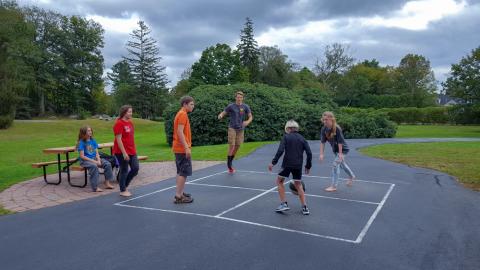 by Foss Tighe
While I was reading Daniel Greenberg's essay (“Are 1000 Pictures Worth One Word?”) on why it has been so difficult to convey the SVS experience in film and pictures, I found myself thinking about the evolution of my own understanding about what… Read more ›
Monday, February 9, 2015

by Mimsy Sadofsky
Aren’t they adorable, all those little munchkins, big munchkins, bigger than munchkins, playing in the snow? Isn’t it nice that the school has so many good sliding places? One can even slide right onto the middle of the pond—not usually an option,… Read more ›
Monday, February 1, 2016

by Foss Tighe
While I was reading Daniel Greenberg's essay (“Are 1000 Pictures Worth One Word?”) on why it has been so difficult to convey the SVS experience in film and pictures, I found myself thinking about the evolution of my own understanding about what… Read more ›