Aren’t they adorable, all those little munchkins, big munchkins, bigger than munchkins, playing in the snow? Isn’t it nice that the school has so many good sliding places? One can even slide right onto the middle of the pond—not usually an option, but due to our concentrated continued super cold weather this winter (am I smiling about that, no), quite acceptable right now. 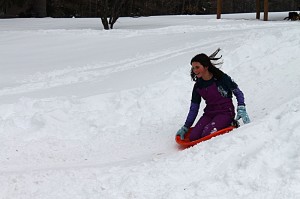 I wonder if anyone this year will figure out a way to slide from the hill near the old parking lot all the way onto the middle of the pond. Of course, it is even better with several people on the sled! I don’t remember there being such a cold and snowy stretch in the last few years when the ice was super safe and we had plenty of pillowy white stuff. (No melting this week. Or last week. That pond is safer by the minute.) 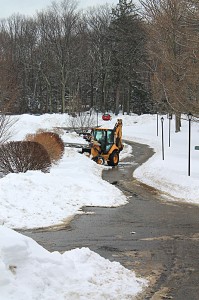 Yeah, but. To get this snow we have to do something. It may look to passers-by like nothing, but it isn’t. One has to live where it happens, and let it happen. And happen. And happen some more. And I will leave out the part about removing it from all the wrong places, since I personally do very little of that. But I have plenty of friends and relations who do plenty of that removal. One just left the house this minute shoveling his way towards the shed with the snow blower.

Snow days -- when you know the night before it opens up possibilities. Last week I spent an entire day cooking more elaborate food than I usually do. That was fun. Once. The night before the snow day you can over-indulge in Netflix. And then read for a while without too much guilt. And then sleep late. Except your body doesn’t want you to sleep so very late. It likes habit even more. Oh, well. And then your day is free for you to construct in any way you wish. But then. Instead of seeing lots of adorable children creating imaginative games without freezing to death, one is left looking out the windows and watching the snow pile up. Come down. Drift happily into all the wrong places. Pile very up. 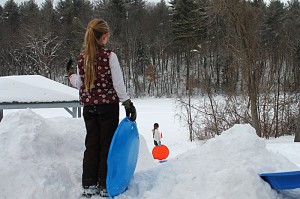 one ofSo it is kind of lonely. No flushed cheeks, no wet boots, no requests for help getting those beastly mittens on -- the super-warm ones that really you can only put one hand in, because you need a hand to put the other one on, and you are suddenly only equipped with paws. No watching people push each other down hills. This is not the shoving of the Patriots or the Seahawks. It is the most gentle help for a soft tumble. In general, lots of rough and tumble play without the slightest antipathy. And then one stops and thinks: the world is not necessarily like Sudbury Valley. Children are not always nice to each other. One cannot peacefully watch them out the window knowing that they are constantly watching out for each other everywhere. But you sure can here. Hard to remember that everywhere else kids are both age segregated and closely supervised -- partly for their “safety,” but partly because there tend to be angry outbursts. Not here. And if anything happens that isn’t solved immediately by the participants, the whole game will be related to the J.C., with a lot of excitement and rollicking amusement, by the J.C. and often by the participants too. We are not heaven, but we are a place where each and every person knows that life will be fair. How rare is that? 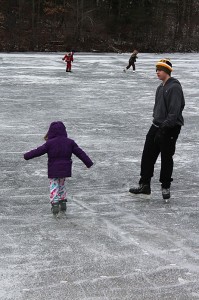 One of the best scenes -- which if you look carefully at our Facebook pictures you can see, but not necessarily grasp -- this year was on the first or second day the ice opened. There was no snow then. It was 17 year old Sam, a hockey player with a long history of excellence in that sport, gently coaching 4 year old Josie in how to skate without falling all the time. It reminded me of Sam the Judicial Committee Clerk, earlier in the year, sweetly dealing with the little kids who didn’t know the ropes yet. He didn’t have to -- watching him skate is so beautiful -- but I imagine he wanted to impart a little of the joy he feels.

I know that the kids don’t like snow days and don’t like holidays. It is time to fess up -- the grownups miss school too!

by Daniel Greenberg
Sudbury Valley has no bells announcing times and few clocks on the walls, but everyone seems to know when noon arrives.  Noon, after all, is when The Concession opens, and The Concession is where everyone can buy whatever snacks and cold… Read more ›
Monday, July 10, 2017

by Hanna Greenberg
Strewing is one of the latest techniques used by educators and parents to lure children to learn things that the adults want them to learn at a time of the adult’s choosing. It has become especially popular among “unschooling” homeschoolers.… Read more ›
Monday, April 23, 2018

Why a Curriculum is Counterproductive

by Hanna Greenberg
All too often parents, educators, and even students ask us why we are so adamant about not offering any courses at SVS, and why we only teach in response to the students’ initiatives. They wonder why we don’t just offer a few “required” subjects and… Read more ›