Our family recently moved to Framingham to be closer to SVS, and during my long hours of packing I found a large plastic bin filled with my son Gavinʼs elementary school papers. These were papers from kindergarten through the middle of 5th grade, when he left public school for SVS. I had saved some every year, mostly artwork or stories he had written, and as I started to look through these long-forgotten relics of Gavinʼs former life, I was struck by two things. The first was that I would not have any more of these papers to mark the timeline of my son’s education. The second was how incredibly superficial these papers seemed to me now.

There were several poster-sized papers, all laminated and brightly colored with various facts about my son: the names of his family members, his favorite color, food and hobby, his goal for that school year. These were the posters that were hung around the classroom on Parents Night in the beginning of each school year. They were a kind of “get to know you” project that I used to secretly think was silly. Since SVS, I've found them incredibly demeaning to the intelligence of a human being, no matter what the age. This box of schoolwork reminded me of the “before” Gavin, the one that wore a plastic school picture smile and sat upright in the car, back straight and both feet firmly planted on the floor in front of him. Really. This was how he sat in the car the first months on the drive to SVS. He was like one of those letters he used to have to write in school, sitting perfectly between the lines.

As I sorted through these papers I thought about SVS and how impossible it would be to put what a child learns there on poster board or perfectly ruled paper. Neither have enough dimension or life to hold the full truth of the SVS experience. For that, a thing would need to be alive, to be part of nature, like Big Rock or Monkey Tree.

An SVS education is just too big for paper, too big for grades, and certainly too big for a poster board of facts and opinions. An SVS education is so complete that sometimes the only way to see what your child is learning is to look between the lines. For instance, I knew the first time I saw Gavin slumping in the car that he was forgetting the social conditioning that had made him sit upright in the first place. And the day he came to the car barefoot I rejoiced inside, because I knew that losing the shoes meant he was getting very comfortable with the nature inside of himself. 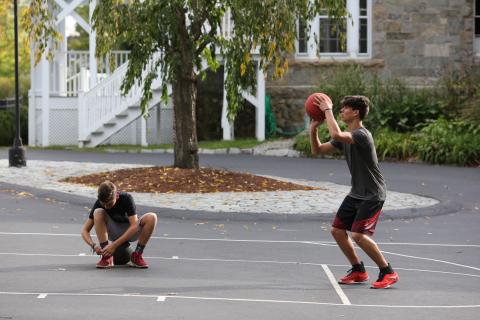 Since Gavin has been at SVS for three years now and has fully recovered from his public school conditioning itʼs not quite as easy to see what he is learning. I think this is because what he is now learning is how to grow into himself. I mean, how do you measure or record something as enormous as that? It doesnʼt happen in a neat straight line. Itʼs much more of a circular process that keeps falling back in on itself. In order to see it happening at all you have to look in places no one ever taught you to look.

I find I can catch a glimpse of this growth when I hear Gavin engaged in an insightful discussion or when I watch him silently battle some of his demons - which often looks like sulking or moodiness, but almost always ends with some measure of emotional growth. I know he is becoming the joyous soul he was meant to be when I hear his infectious laughter, and I know without a doubt that we made the right decision in sending Gavin to SVS when I see the genuine smile that now lights up his face. As I watch my thirteen year old enter his adolescence, I see in him a grounded maturity, as well as a healthy responsibility for his own life, and know this is a gift that SVS has given him.

While none of these things would make for good facts on a poster or answers on a worksheet, they are the markers of my son's education that I treasure now. No, I canʼt put them in a box and label them “Gavinʼs Education.” I can, however, place them in my heart and be grateful that the child I gave birth to is growing into the adult he was meant to be. This to me, is what an SVS education is all about.

by Daniel Greenberg
I am always amazed at how many high school graduates have little or no idea of how everyday personal banking works. I mean, simple things like personal checking accounts. I know I didn’t. Well, that’s not the case with Sudbury Valley kids. Without… Read more ›
Monday, February 29, 2016

by Lauren Ligotti
It was one of those days that everyone was having so much fun, no one remembered to take many pictures. The day was wonderful from the very beginning to the very last second. A day in which the dilemma that was encountered was where to eat dinner.… Read more ›
Monday, April 11, 2016