During the last Open House, in October of 2015, there was a remarkable interaction. It didn't surprise me, but it greatly pleased me. Unfortunately, I don't think the guests who were with me had enough context for what they saw to appreciate it.

Leah, who is 10, and who has been creatively amazing in many different media and many different ways since I met her when she was five, was sitting in the art room at the end of the day using markers and paper. The Open House was winding down and no other kids were using the art supplies at all anymore. 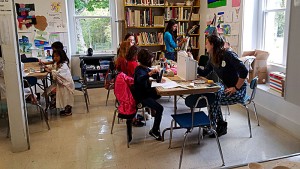 There are many amazing artists in our school, and two of them are best friends, Amelia and Jane, both seven. They are extremely accomplished.

Leah explained that she was using a technique she had never used before, but that she had learned from Jane and Amelia. It didn't surprise me that it was true - till I thought about it for a second. An accomplished, self-confident ten year old had no trouble trying a technique of drawing figures, which related to how hands and feet are portrayed as well as how faces are tilted, from two children who were much younger. 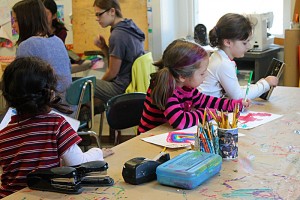 We often talk about age-mixing and how it allows students to play with whomever they wish, which also means exactly the same as work with whomever they wish. It is easy to imagine how enriching this is -- for an eight year old to be playing with eleven and thirteen year olds. It is easy to see the results: young children have (sometimes to our dismay) enormous vocabularies. They have staggering sophistication, sometimes in areas parents would not have imagined. But this is another story. This is the opposite side of the coin. Leah never considered the age of Jane or Amelia. She learned from younger children only because they knew something that interested her.

It was normal. It was beautiful, and it was totally striking, because most people consider the transfer of knowledge to be in a downward direction, not an upward. But it couldn't be less true at Sudbury Valley, where the age-mixing is so normal that people don't usually remark on it. 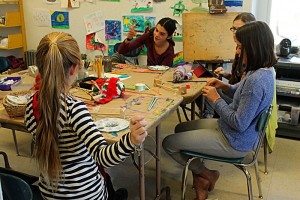 But they should. Today I watched a 12 year old girl on a visiting week spend most of her day with a nine year old "veteran". Besides how to negotiate the school, I can imagine so many things she was learning. How to be an equal with an octogenarian may have been one of them; not to be disrespectful when your parents taught you respect, but merely to realize that in this school you are a peer.

When teenagers come to interview, I often tell them that they will learn from watching little kids. What will they learn? First, how to manage their time. Time hangs heavy on a new teen's hands. They have usually spent a lot of school years hating being told what to do, but not being told what to do, it turns out, throws the burden onto you. "Oh, no, I wanted to be free, but now I don't know what I want to do." Young children are heedless of the idea that freedom is a burden. It is an enormous lesson to learn. Young kids express their happiness (and sometimes other emotions) with gusto. Teens need a dose of that too! They need to relax. Children who have spent years at SVS are masters of the art.

by Jay Flood
I had an interesting discussion with a five year old SVS student who was irked by something a seven year old from a traditional school had said to him, namely, that she knew more than he did because she was older and already half way through second… Read more ›
Monday, February 3, 2014

by Hanna Greenberg
Hanging the photo exhibit on Friday, January 24th proved to be an exhilarating experience for me. It goes without saying that the photos are varied in their subjects, beautiful and interesting. What else would one expect from kids at SVS? They are… Read more ›
Monday, March 24, 2014

by Isabella O'Connell
When new students arrive on our campus and I volunteer to show them around, there are some SVS basics I always hit on. I tell them no staff can give them a detention here like they can at their traditional school. I tell them no one will force them… Read more ›