When You Were A Little Girl

When You Were A Little Girl 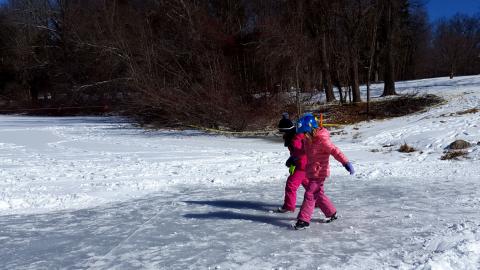 Emma is just one of those “little girls”. They don’t look that individualized; they look like the little girls one used to see in picture books, the ones that behaved either perfectly or horribly, but the story came out all right in the end. But real girls are not like that, and not one of the adorable little girls here is like another, and one cannot assume anything about any of them. However with Emma you can assume that questioning will not stop until she has built as much of a picture of whatever it is she is asking about as she can. Last year she specialized in how the school works.

There are two Emmas: one who questions everything deeply to build up her very large knowledge base; and the other who runs screaming through the school in joy! Both are always interested in conversing with everyone. She has always liked showing new people around, adult visitors as well as visiting students. She knows pretty much everything that happens here: who works a lot at the wheel in the art room (and the most wondrous things they have made); who plays the most interesting computer games; and who gets to work with the tools in the (locked) morgue. She is very close friends with every adult, and that preceded her ability to have a lot of friends her own age. Both Emmas are particularly fun because you never know what they are going to be thinking about. It is always fresh and unspoiled, and yet worldly-wise in very many ways.

So I was walking to my car one day recently when the snow was piled up in many places on the sides of our (pedestrian) roadways – great for King of the Hill games, which kids have been playing a lot this year. Emma was walking along the top ridge of one of these piles. It was sort of like walking along a very mild cliff. It was very cold. I called, “Hi, Emma, would you like me to zip your jacket for you?” Of course she said no. But then she said, knowing I am at least as old as anyone’s grandparents, “Did you used to do this when you were a little girl?”

When I gave her my answer she was totally nonplussed, as much as if I had said that my parents wouldn’t let me! I said, “No, I never saw snow at all until I was 20 years old! I grew up in a very warm place.” She was frankly shocked. The idea that an adult could not have been playing in the snow during their childhood was really hard to believe. Clearly I had been deprived. After more than fifty years of snow, I feel that I got my playing in very well, but it is true, not when the snow was up to my knees! There is a certain freedom about jumping around in the snow when it is huge and you aren’t, and knowing you are going to be just fine – a sense of freedom that grown-ups can’t always duplicate.

Sometimes, especially in our nice long New England winter, parents worry about their little kids playing a lot on their iPads. They worry that they don’t know if the children have made their way into areas that parents don’t want them to go. (Of course, each parent knows how to check where the iPads have gone.) I don’t want anyone to be exposed to stuff that they don’t want to see, or for that matter stuff that is distasteful, but I confess to hoping those kids explore their hearts out without knowing exactly what they will find.

But mostly what happens in winter is that kids are playing video games indoors. Around 9:00, when I usually get to school, there are often groups of them with iPads. I think, “best don’t look” because sometimes people play excruciatingly silly little games. Today there were four of those little girls, conversing and playing around the far end of the kitchen table. They were adorably interacting and playing with several different challenging games.The social aspects were open and particularly charming; the games were certainly horizon expanding. In fact, Minecraft, which at least one was playing is challenging well into the teen years, if not forever; it seems to grow with the child.

There were two different games being avidly played, separately, on four iPads. The conversation was very lively. Mostly it was about buildings, landscapes, animals. I heard mention of things one can do on Minecraft that are not available on other games. Lots of personal bits are thrown in all the time, and the greetings when I walk in are particularly warm because it is the first time they have seen me today. I am certainly not ignored; everyone will tell me what they are doing. If you shut your eyes and pretended any of their feet reached the floor, you would be surprised at both the sophisticated vocabulary and sophisticated ideas about how to use their equipment – and how to live their lives.

They had cleaned the playroom the previous afternoon – really cleaned – and then started in the art room but then their parents whisked them away. Today started with the remainder of the art room and some thoughts of the kitchen, but by the time the art room was cleaned, the playroom was crying out for some tender loving care and back they went.

Games come in many varieties!

by Hanna Greenberg
A young girl of nine or ten asked me to teach her math. I gave her some problems which she enjoyed doing. Next day she came to me with many sheets of paper covered with similar problems which she made for herself and then solved. She is obviously… Read more ›
Monday, October 22, 2018

by Anika Prather
(Part 1 in The Living Water School School's “Transparency” Series)  It is late. I have just fed my dogs. Everyone is asleep and like most nights, I am the last one up and I’m usually thinking about the school. Tonight, I am thinking on parents… Read more ›
Monday, November 10, 2014

My love-hate relationship with Concession

by Hanna Greenberg
It’s much easier to explain why having a candy store at SVS is problematic than why, year after year, the School Meeting votes to keep it in operation. Think of how prospective parents feel when they walk into the main lounge on the way to the… Read more ›