We Never Resemble "Lord of the Flies"

We Never Resemble "Lord of the Flies"

This spring, there's been quite a lot of talk, once again, about a book called Lord of the Flies, written by William Golding. Published in the ‘50's, it is a piece of fiction about what happens when a bunch of kids get stranded on an island, and it's not a pretty story. Nevertheless it has been a way to ignorantly negate schools like Sudbury Valley. People say that children not under adult control who are stressed quickly lose their moral compass, to be polite, those same people assume that Lord of the Flies was true enough, although fiction! That is sort of like deciding that Star Wars is somehow close to true.

Dutch historian and author, Rutger Bregman, wondered what happens in real life situations like those described in the book. Eventually, he found that a group of kids had taken (“borrowed”) a fishing boat to have a little escapade. Unfortunately, they were shipwrecked, and they ended up being washed basically onto a big rock in the sea. Six boys were left there.

They arrived kind of dazed and bewildered, but quickly realized they had to figure out how to survive – and they did. They were strictly well-disciplined about making sure that everything necessary got done. They made what SVS’s Camping and Touring Corporation calls “chore charts”. They divided into groups of two, so they always had two people doing each chore – everything from figuring out and accomplishing hunting and gathering, getting fresh water and fishing; figuring out how to shelter from further storms; with no equipment, still managing to treat injuries; all the things that you would need to know when you're alone, and have nobody but yourselves to rely on. This incident occurred about 50 years ago, and Dr. Bregman managed to find two survivors and interview them extensively for his new book – soon to be a movie!

In real life, the group managed to construct a way to live for themselves. They didn't fight, and discipline and decency didn't fall apart. The real life story rang much truer than the fictional version. And I also know that if kids from Sudbury Valley School found themselves shipwrecked, cooperation would rule, and they would not turn into a Lord of the Flies kind of group. They would manage to survive, and be proud of what they did. 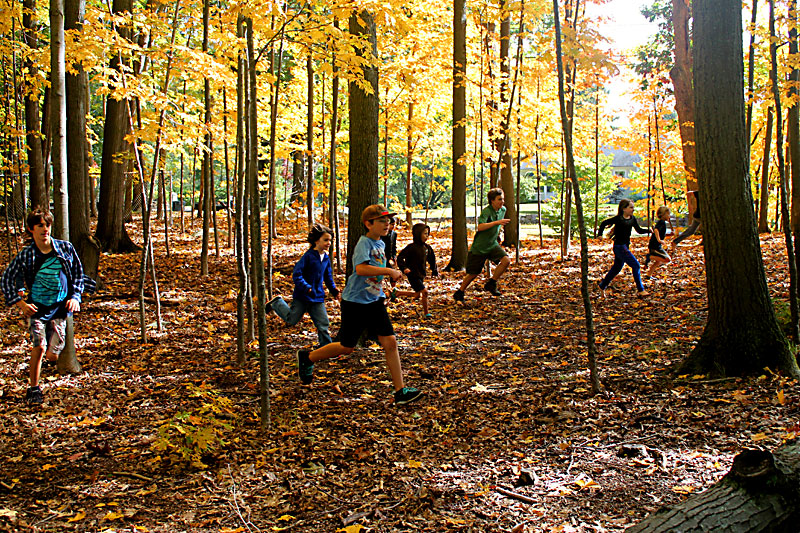 by Lauren Ligotti
It’s funny how things happen at SVS. Conversation is always a huge part of how students and staff members spend their time. People of all ages are talking about interests, hobbies, and ideas. It flows without interruption. During one of these… Read more ›
Tuesday, July 27, 2021

The Heart of the School, Two Takes

by Daniel Greenberg, Mimsy Sadofsky
Take One by Daniel Greenberg If you happen to be sitting in the large front room called “the sewing room", you might notice that every day at 11:00 a.m., eight people walk into the adjacent book-lined “seminar room". What you are seeing… Read more ›
Monday, February 9, 2015

by Mimsy Sadofsky
Aren’t they adorable, all those little munchkins, big munchkins, bigger than munchkins, playing in the snow? Isn’t it nice that the school has so many good sliding places? One can even slide right onto the middle of the pond—not usually an option,… Read more ›