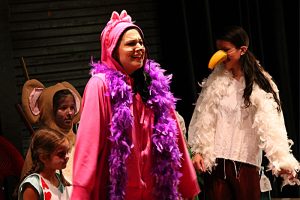 Musicals and plays happen at all schools. It is always a big deal to produce them, what with numerous rehearsals to arrange, costumes and props to procure, and finding the talent in the student body to perform all the roles, big and small. What was unusual about the performance last Spring, was that it was all organized, financed and coached by the students themselves.

Twenty two students were in the production, ranging in age from five to nineteen. Georgia was the producer, and Brenna was the singing and acting coach, also responsible for the staging, and co-directed every aspect of the show. They went around the school asking people whether they wanted to participate in the show. They arranged auditions and settled who will be the cast of the musical. All the participants committed to come to three rehearsals a week, and to stay for about an hour and a half each time. 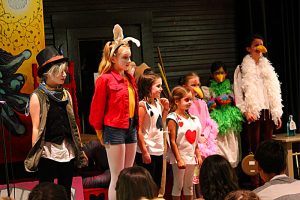 Every Wednesday, I do the mid-day census of students under eight, so I would have to make my way to the barn in rain or shine to find the children who were there for the rehearsal. It was remarkable to see everyone's quiet focus on what was being discussed. No attention-seeking by the participants, nor was any cajoling needed by the older students. Everyone was equally attentive and cooperative. They prepared for about four months, and the results reflected all the hard work.

The cost of putting this show on was about $600. All of the money was raised by the participants, who sold goodies that they had cooked at school or brought from home. The rights for the play and the books cost $300, and the costumes and props cost $300, either bought at thrift stores or built for the show. The result was stunning in appearance and impressive visually. 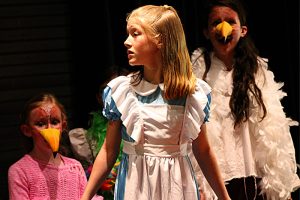 An hour before show time I went to the barn to look around. There was lots going on but no frenetic activity, no nervous energy or irritation, something usually expected before a show everywhere. Students who weren't in the show were setting up the chairs and the music apparatus, others were applying make-up to all the eager faces and helping the actors adjust their costumes.

Finally at one o'clock sharp the show began and lasted for an hour. The singing was really excellent, the staging superb, the costumes beautiful, and the whole performance totally delightful. The packed house showed its appreciation repeatedly throughout the show. Next day I asked Georgia why she undertook this huge project. She said that she believed that she could be a good director and so she set out to prove this to herself. I inquired what qualities she thought a director needs. This was her reply:

"Vision; Firmness; Perseverance; Knowledge of acting and singing; Organizing abilities; and Understanding that all kids are different and have to be treated accordingly." 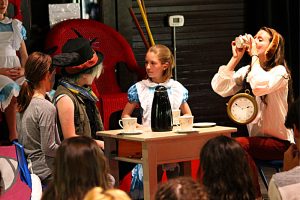 My last question to her was:"Did you feel it was a success?" and she answered:"Yes, it was more than I hoped for."

For me too this kind of tour de force executed by so many students on their own was more than I ever imagined would emerge from the freedom and respect for children that SVS offers to everyone.

by Mimsy Sadofsky
In many ways, it is nothing short of miraculous that Sudbury Valley has reached the 50th year of its operation. For all the talk of reform in the world of education, those parents who feel comfortable allowing their small and large children autonomy… Read more ›
Monday, August 26, 2013

by Daniel Greenberg
One day last Spring, as I was walking by the Red Couch room on my way to the school’s office, I noticed half a dozen young girls, most under the age of eight, playing happily. Actually, it would have been hard to miss this scene: the elements of the… Read more ›
Monday, April 9, 2018

by Foss Tighe
Cori, my oldest daughter and Kali, one of her close friends at SVS, are having a good-humored debate about which one of them reads more books. This debate has been going on so long now that for Christmas their friends bought them each a… Read more ›