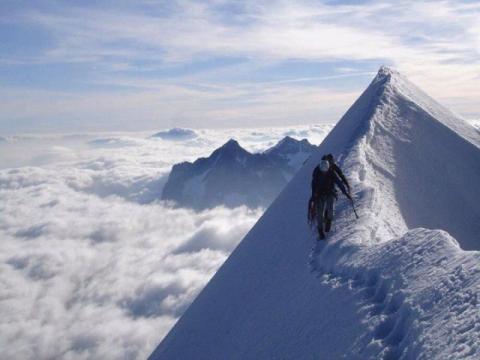 Fifty years of working to keep SVS alive and vital is my personal equivalent of summitting K2 the toughest mountain on earth.

Warning! Unlike most of my writing, which dwells on the joy and optimism of daily life at SVS, I am going to go to the dark places of sorrow and disappointment that I have encountered here over the years. I feel that people should see the whole picture, and that talking about difficulties we have encountered might actually be helpful to others who have met with similar experiences.

Danny and I took the first step into our future by quitting the academic world in which our parents and brothers were steeped, where we were both expected by our families and friends to stay for the rest of our working lives. Bingo! In an instant we were flooded by expressions of deep concern for our sanity, and urged to undergo therapy immediately and abandon this foolishness. “What?” they said. “You are relinquishing success in academia in order to become kindergarten teachers? That is just insane and irresponsible towards your children and yourselves. Give up your crazy pipe dreams and be sensible!” We loved and respected our families, and it was a big shock to discover that we had lost their respect for us. The same responses came from our extensive circle of friends and colleagues, who just couldn’t abide our ideas about child rearing and schooling. One by one, they shunned us, so that our decision to pursue our ideas about education caused us to lose our former support group. We found ourselves alone.

Luckily, we quickly found new friends and colleagues who shared our ideas and dedication, and together we were able to open SVS in the summer of 1968. Then, in no time flat, about six weeks after the school year started, several parents became disillusioned with our program. They had claimed they wanted their children to be free, but it turned out that they expected their children to use their “freedom” to choose to do what their parents wanted them to do – namely, to do academics. Well, the kids were not buying it. They wanted to have endless conversations about what they were thinking about, and not do what other people thought they should be doing. To make a long and horrendous story short, a group of parents were determined to take over the building that we had paid for, kick us out, and establish a different school more to their liking. Now, I have no problem with people holding to different philosophies and disagreeing with us, but for the life of me I couldn’t then, and cannot now, understand how people could feel morally justified in just walking in and taking possession of what we worked to build for over two years. It was the saddest day of my life. Luckily our school was saved by the advice of Reverend Charles Gaines of the Framingham Unitarian-Universalist Church, who said that we should just offer to refund the tuition of the dissident parents if they leave. I was incredulous. I could not believe that after all the tumult, they would accept the offer. But Reverend Gaines understood human nature better than we did, and they all departed, making it possible for us who remained to make the school work.

There is nothing new under the sun, as the saying goes, and over and over we had to cope with people coming to our school believing that it stood for their ideas of schooling, only to become disappointed. We would work hard to help their children adapt to running their own lives, we would get attached to them – and then they would leave the school. Every such situation was painful to observe.

Then there was dealing with desperate parents, those who had children so depressed and unable to function that they were willing to send them to SVS as a last resort. Mostly, these kids were sensitive and smart, but they couldn’t cope with the coercion and the boredom and the waste of their time in a traditional educational environment. They would thrive at SVS, only to be withdrawn and sent back to their old school when their parents felt they had been “healed”. To witness that is just heartbreaking, and the pain never diminishes with time, because to us it doesn’t make sense. If a student gets happier and learns to function well, why take them back to where they were miserable?

Last, but certainly not least, is the occasional hostility we encounter from some “sister schools” that claim to be inspired by SVS. For some reason that I cannot fathom, one school has not felt any compunction in adopting the domain name sudburyschool.com as its own! It isn’t exactly lovely to find out that if you Google “Daniel Greenberg” you are directed to Hudson Valley Sudbury School’s website, where he is listed as an “author” (presumably writing on behalf of that school).

So here we are celebrating our fiftieth year. Make no mistake: we love working here, because children who know how to take care of themselves, even at four years old, are beautiful people. They are so competent, interesting and sweet. There is nothing – yes, nothing – more wonderful than to walk into school and be greeted by children of all ages with warmth and the sense that you are an individual who is seen.

by Dana Ortegón
Being a Sudbury Valley School parent presents unique challenges. For one, when there’s no honor roll, varsity team, or Gifted & Talented Program, it takes awhile for you to figure out how to brag about your child. “Sally got down from Big Rock… Read more ›
Monday, January 4, 2016

by Hanna Greenberg
When you walk into the art room on any Monday or Wednesday, you can hear an almost constant murmur which turns out to be coming from several kids sitting at the clay table or at the two wheels working with clay. Some are throwing pots, others are… Read more ›
Monday, January 1, 2018

The Many Levels of Gingerbread

by Lauren Ligotti
The month of December always feels rushed, but in a good way. Students are more amped than usual. They are excited for Christmas, parties, and especially making gingerbread houses. Mimsy organizes a few days to make gingerbread houses before the… Read more ›