So Far, and Yet So Near!

So Far, and Yet So Near!

When I was in Israel (the country of my birth) this summer, I visited two thriving schools inspired by Sudbury Valley. Both are filled to capacity and growing fast, with a current total of over 200 students between them. What was especially thrilling for me was to see how each of these school is its own unique creation with a distinct character, but with one important feature common to us all: each individual, no matter what their age, is given the respect and freedom to be the master of their lives.

The Kanaf school is located in the Golan Heights in the north of Israel. The surrounding population is diverse in all respects. Many are farmers, others are artists or have small businesses, or work in management and in hi-tech startups. Some folks are religious while others are secular. The majority is Jewish, but several large Druze and Muslim towns inhabit the area. The feel of the place is of a frontier, akin to our old West, minus the gunplay.

The Kanaf school is one of the first to be integrated into the publicly funded government run system. The deal they made is too complex for me to describe here, but in essence each enrollee is entitled to a certain sum of money for their schooling (a kind of voucher system) which Kanaf will get, in addition to a building to house the school. The governmental authorities agreed that they would NOT interfere with the way the school is run, and that the students would be free to determine how they choose to use their time at the school. Personally it gives me the shivers. On the one hand, the families sending their kids will not have to pay tuition, and thus a wider socio-economic spectrum of families will enjoy this alternative to educate their children; but on the other hand it is very frightening to lose fiscal control and independence from the authorities, who all too often tend to break promises made by their predecessors. Only time will tell. In the meantime I am excited for them and think that this could be a fantastic breakthrough. 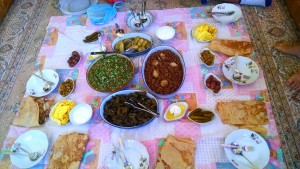 One evening I talked to a group of parents and students and felt comfortable and elated to see people embrace our ideas in such a different culture from the US. One family that had enrolled a ten year old boy was from a Druze village way up north near Mount Hermon. They invited several of us for lunch the next day and it turned out to be one of the loveliest days I have ever experienced. The village has very narrow streets lined with white stone buildings. Inside the home there were four large square rooms. One had five sofas, all made of the same upholstery, lining the four walls – evidently the “western room” used for formal occasions. The other three rooms each had a huge oriental rug covering the entire floor space. Against the walls on the floor were foam rubber narrow mattresses with small cushions to lean on covered with fabrics to match the rugs. There was a beige room, a green room and a blue room. Each room had a giant window with a glorious view of the mountains, which let in a cooling breeze even on that hot August day. The kitchen was small, and therefore all the elaborate preparations for lunch were carried out on the floor of the rather small hallway. The women sat cross legged cutting up lots of vegetables into tiny pieces, which resulted in a fabulous-tasting, exotic salad. When it was ready, the food was laid out on a tablecloth on the carpet and all of us sat on the cushions on the floor. It was a great feast indeed! 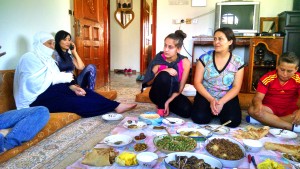 It took a very long time to prepare the food, time which I spent talking to the paterfamilias, the grandfather of the boy who goes to Kanaf. He explained the Druze religion, which is ancient, monotheistic, and quite different from Islam. Yet his wife was wearing traditional Muslim garb and a head covering which hid her hair, neck and mouth. He said that it was not a religious matter for her, but one of fashion: she was more comfortable dressed in the manner of Muslim women. By contrast, her daughter, the student’s mom, wore leggings, a tight shirt and high heels. No wonder this family was able to take the leap into a Sudbury school!

I asked the boy how his friends and family react to his going to school away from the community and he answered, "I tell them that I am happy, and that's it". He wants to be a heart and blood-vessel surgeon (he is not afraid of blood and gore). I think that he will do what he wants to do. His sixteen-year-old sister taught herself English and science on the internet and dreams of becoming a biochemist at Oxford University. Everything about my visit was so incongruous, such a mix of ancient and modern, of East and West, and yet I felt comfortable and had easy communication with them all.

The Sudbury school in Jerusalem is urban in nature. Many of the students know English and read on the internet extensively. It is a lively, energetic and vibrant place, not noisy nor anarchic, quite similar to a normal day at SVS. I was struck again by the diversity of the student body, which comes from most of the large variety of groups who live in Jerusalem. Some look American in their fashion styles, while others are wearing modest clothes dictated by religious customs. It is a rather rare occurrence in Israel to see children from religious families attending a secular school. I asked one mother why she chose this kind of environment for her kids, and she said that for her the Jewish religion puts a huge emphasis on "love thy neighbor as thyself" and believes that this school's respect for others, and spirit of tolerance, is the best place to foster that kind of behavior.

It is people like that who keep me loving to work and talk about the school for so many years, even when I am on vacation. I am happy for every single kid who is lucky enough to attend a school which respects his choices and allows him/her to be free.

by Hanna Greenberg
Downhill skiing and snowboarding is a favorite activity in which about a third of the school’s population participates. As a consequence, ice skating has to wait until March. I love skiing and am not fond of skating. I hate the cold that seeps into… Read more ›
Monday, December 16, 2013

by Jay Flood
I’ve grown to love the interactions with the guests at Open House. It’s fun to stumble onto someone who has little or no knowledge of the school, and also to see their reaction to hearing about the model for the first time. I had a particular… Read more ›
Monday, March 9, 2015

by Hanna Greenberg
I happen to love watching the NBA play, especially the finals, in which only the best of the best compete with each other. The skill, power and grace displayed in these games is amazing to me. The games at SVS are quite different, but oh so… Read more ›