A broken leg is no fun. However, since at SVS almost any new situation can become a window into what is going on in the minds of the kids, my broken leg led to many unexpected insights for me.

My mobility was seriously curtailed by my inability to walk. So when I came to school I would spend my time parked for hours on the sofa talking to people. My crutches became a great attraction. No matter what size he or she was, every student had to experiment with their usage. It was amazing to see how kids managed to learn to use them even when the crutches were twice as tall as them. One day, Peter, who is a well known lover of all living things, played with my crutches as if they were machine guns – making shooting sounds while pointing them at me. His face was calm and sweet and showed no sign of aggression, but still I asked him:

"Peter, do you believe in war?"

"Because you are shooting at me with this crutch." I answered.

"What does that have to do with war? You adults don't understand that it is only a game and it doesn't mean anything," he said with exasperation as if he expected me to be more wise about these things.

Peter knows that I know about his reverence for life. At the school's camping trip to Nickerson State Park I witnessed the following scene.

It was sunset. Some kids and I were sitting on the beach playing in the sand and enjoying the soft evening wind and the lovely waning light. A fourteen year old boy was killing ants absent-mindedly. Peter watched for a few minutes and then told the boy to stop doing it because the ants were living beings and their lives should be respected. The boy said that they were only ants and that it was no big deal to kill them. Then Peter, who was nine or ten and much smaller than the other boy said rather sternly:

"How would you like it if a giant came over and crushed you saying that you were only an ant?"

The boy shrugged and stopped bothering the ants. Peter evidently had convinced him.

As distasteful as it seems to many of us who abhor violence and see guns as an instrument of violence, children – our children – like to play with them. A gentle child like Peter has a lesson to teach us – namely, that we shouldn't interfere with these games because they aren't what they seem. 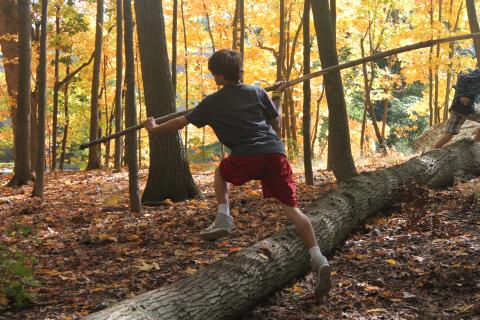 Just a few days after this incident I was telling another adult about it in the presence of Ben who was six. He told me that he too loves to play with guns but that his mother doesn't like it and won't buy him one. I asked him why and he said:

"Because she thinks it is violent."

"No I don't! I am not violent at all and I still like to take a stick and play with it as a make believe gun. Other kids are violent sometimes even without a gun."

I don't quite know why these gun games are so universally compelling for young boys. Maybe one day another child will show me and then I will understand.

Note: This piece was originally posted on November 5, 2018.

by Michael Greenberg
Reprinted from the Liberty Valley School (LVS) Journal For some time now I have been thinking about a bunch of questions that turn out to be related to each other. Here are some of the questions, in no particular order: Why is it so rare these days… Read more ›
Monday, February 1, 2016

by Foss Tighe
While I was reading Daniel Greenberg's essay (“Are 1000 Pictures Worth One Word?”) on why it has been so difficult to convey the SVS experience in film and pictures, I found myself thinking about the evolution of my own understanding about what… Read more ›
Monday, April 10, 2017

Senate Confirmations, Donuts and the Price of Justice

by Foss Tighe
Last week I found an example of “life imitating life”. Or more specifically life at SVS was imitating life in Washington. I am fascinated by the quirky details of democratic institutions. So, I got a little thrill when the 50-50 vote in the Senate… Read more ›