An Open Mic is a scary thing to organize. After all, the success of the endeavor depends not on who says they want to sing, or play a song, or dance, or do an act, beforehand, but who actually steps up and does it at the time it is happening. In a school like Sudbury Valley, two things tend to happen. The first is that there is some sizable group of people who take the opportunity for an Open Mic extremely seriously, and rehearse for it as if for an audience with, say, the President. And the second is that some don’t, but carry things out well anyway. Oh, well, I guess there is a third – but that didn’t seem to occur – people who say they will and then don’t bother. So, here as well as in the public arena, an Open Mic needs more than just opportunity. It needs follow-through. 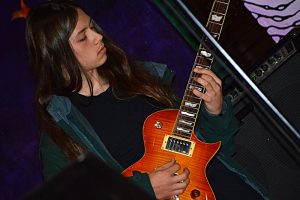 So it was with some trepidation that I approached the scene of our first Open Mic performance, which took place on November 16. A lot of work had been done. There was “minimal” equipment, but far from none, and it had been set up well. There was incredible food. Usually our performances have had store-bought pizza and drinks. There is nothing wrong with that, but for this day a different plan had been made: the people running the Open Mic seemed to expand and expand. Jay Flood was the original man behind the idea. He has spent some time here this summer and fall, for the Physical Plant Committee, organizing the music rooms, which had fallen into disorganization over the last year or so, and developing techniques for keeping things in good shape. He wanted kids to have a chance to perform, and he also wanted them to earn some money for expenses for musical endeavors. 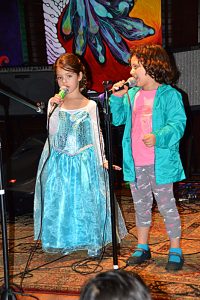 In this spirit, a couple of other adults and a host of young and middle-aged kids, along with Jay, planned a menu to make people happy while listening! There was homemade pizza (oh, yes!) and two kinds of homemade cookies. A ton of it was sold to happy listeners who forgot to litter their plates. (That was pretty exciting too; it was a definite mark of respect for the performance, the school, and the refreshments.)

There is no way to list the high points of the performances. Kids who had never played at school before displayed glorious talent. It was exciting to see new kids, who often seem shy, show big talent. Little kids were wonderful and well-rehearsed. Big kids were kind to one-another in general, played together without “starring” by stealing scenes, and played accompaniment, in the SVS way, whenever there was a situation that needed it. It was all just plain wonderful. Old stars and new stars entertained us well.

Meanwhile, the food scene was manned by a fabulous group, some of whom had done a lot of the cooking! It was beautifully organized. Fresh hot pizza was occasionally run up from the kitchen (not the pleasantest job; it was raining) by some of our super-runner cooks, and the entire handling of the concession matched the handling of the performances. Who doesn’t want to see four smiling students taking care of our food needs? 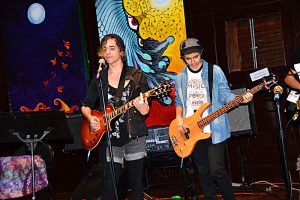 For me, Josie was the high spot of the day. She is one of the constant delights of my life anyway! A high-spirited independent young woman of perhaps six, she is one of the most expressive people I have ever met. She was not a performer, but I have never seen more spontaneous appreciation of the performances of others. She was unable to contain her joy, and greeted performances with excitement, movement (too gentle a term) to the music, and major hugs for performers. She raised the mood of the audience to hers – ecstatic.

So many people need to be thanked, but it is so many that I can’t think of where to start! I think of some of the singers, and they still make me happy; I think of some of the musicians, and how much fun they made for the audience, and they also still make me feel great. Oh, and the pizza in my tummy didn’t hurt either! Thanks to several dozen students, to Jay, and to the other staff who were instrumental in our first Open Mic.

by Hanna Greenberg
Often we as adults don’t get why kids make a big deal about things that seem trivial to us. A good case in point is the matter of fashion. It probably has been a bone of contention between the young and the old since the beginning of history, but… Read more ›
Tuesday, March 16, 2021

Can You Trust Children To Design Their Own Education? [Audio]

by Daniel Greenberg
What is the justification for trying to guide children and tell them what they need to be successful adults? Does anyone have a right to interfere with their process of finding out who they are and what their purpose in life is?
Monday, October 24, 2016

A New Rite of Passage at SVS

by Hanna Greenberg
As is well known, our rules require students to attend school at least five hours a day throughout the school year. In order to see to it that this rule is being observed, we have to keep an accurate log of each student’s attendance. This presented… Read more ›