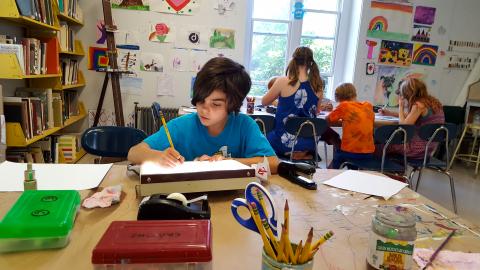 We live in a country which is governed on the principle of individual liberty, where people have been able to grow up in a way that fosters imagination and inventiveness. This idea of the sovereignty of the individual underlies the transformation of a band of idealistic wanderers into, arguably, the most productive and creative nation in history. I sometimes wonder, when I see the gradual erosion of these liberties, how this will effect the resourcefulness of the next generations. With the pace of change and the increasing pressures taxing the time of our youth, I wonder if our children will hold on to their creative spirits into adulthood.

I had a conversation recently with a friend who had come into an intensely productive period and had conquered a “writer’s block” that had been plaguing him. When I asked how it was so, he said he had boiled down his existence into the essentials and extricated himself from commitments that had bound up his time and also his creative voice. He said his withdrawal appeared to some as selfish, “I realized I couldn’t be everything to everyone.”

Time management is what drove Einstein to buy a wardrobe of identical gray suits so he wasted no brainpower deciding what to wear each day. Creative effort requires a great deal of reflection, introspection and thought. One must find the mental space to allow these things to surface, to plunge the depths of nature and interpret and transmute that communication into form.

We know stories, particularly in music, of reverie and revelation in which the creator is privy to some vision they claim came to them in an epiphany and which they then dictated as told to them. We’ve heard of the songwriter who scribbled his hit on a napkin in five minutes. Mozart told of how a musical landscape would appear in his mind “all at once” and his true gift was in his ability to remember the structures. As Stravinsky said of his famous work, The Rite of Spring, “I was the vessel through which it passed.”

There is a special kind of alone time required to find these gardens of imagination where objects seem to exist full-wrought. I’m reminded of the caption on my coffee mug in college which read, “Time is Meaningless in the Face of Creativity”, which is that there is only the present moment in which I create, an unstructured time where I listen and discover within the quiet at the center of my mind, a time that isn’t taken for some other purpose, a span, not a scheduled, divvied portion but broad chunks of openness in which the inklings of an idea can become the mature fruit of thought.

We often find that individuals who possess deep creative abilities also have a “screen and sheath in which Pan protects his well-beloved flower.” We see it in every person who is focused on something and can’t be bothered. We see it in the young artist who buries her head in pencil and paper. A person’s ability to tap deeply into the moment and access this stream is directly proportional to their having grown up in an environment that fostered that ability. It’s a natural thing for children to open creative worlds if they are given the freedom to do so, but more and more it seems this comes hard-fought. It’s won by the doodlers and dreamers in grade school who manage to isolate their private world, those who know in their heart that their own thought has value beyond what outside powers might have them believe, those with the same kind of self respect as the pioneering spirits who came to this country, who understood that individual liberty was the driver of creativity, and who crafted the government to ensure that these unique freedoms remain the right of future generations to best perpetuate the wellspring of American ingenuity.

by Hanna Greenberg
Musicals and plays happen at all schools. It is always a big deal to produce them, what with numerous rehearsals to arrange, costumes and props to procure, and finding the talent in the student body to perform all the roles, big and small. What was… Read more ›
Monday, February 27, 2017

by Wendy Lement
When I was voted in as a new staff member last spring, I knew I’d be doing a lot of cooking. Since the school’s inception cooking has been a vital part of SVS’s culture. The seeds for my own career as a chef were sown in that same kitchen. I baked… Read more ›
Monday, January 29, 2018

by David Greenberg
This article is reprinted from The Field, the newsletter of Fairfield School. There is a debate among educators regarding the best way to teach reading and writing. In one camp are the whole language proponents. They believe that reading and writing… Read more ›