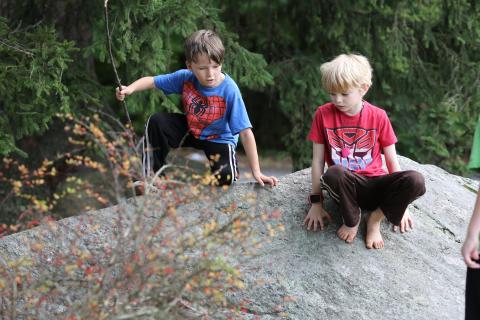 People always say the J.C. is the heart of the school. They’re right. It’s the way our school handles misdeeds or wrong doings on a daily basis. It’s one of the reasons it’s so enjoyable to go to school here and to work here. There isn’t one person who is the “authority”. If I, as a staff, feel that a student is breaking the rules, I don’t have to reprimand or scold them. It will be brought to the J.C. and will be taken care of by a jury of unbiased peers. This takes a load off of people’s shoulders because the responsibility of enforcing rules is divided and not just one person’s responsibility. Just like the American judicial system, the J.C.’s premise begins with the philosophy of innocent until proven guilty. Even if the defendant in a complaint thinks s/he is or could be guilty, the whole situation will be discussed and debated before a decision to file charges is made. The defendant could walk away without a charge or a sentence after the situation is fully investigated and discussed.

The other day, I served as a member on the J.C. A student, named Rachel (for purposes of anonymity), wrote up Steven (again, fake name) because Rachel believed Steven had stolen her stick. The front of the complaint simply said, “Steven stole my stick.”  Needless to say, the J.C. needed more information.

We spoke with Rachel and asked her to tell us the reason for her complaint. The encounter from Rachel’s perspective went as follows: She had been using and playing with the stick all day, but wanted to eat lunch inside and placed it down. When she came back, the stick was missing. She then noticed Steven with a very similar stick and asked for it back. Steven said no and ran away. To Rachel, this was a very special stick because she felt it was the perfect thickness and length for the activity she had been using it for. Rachel wanted it back so she could continue to play and use it to what she felt would be its full potential.  Rachel believed Steven had stolen the stick from her. It could have been decided that there are a million sticks outside and this complaint should be dismissed without further inquiry. However, the members of the J.C. did not mock Rachel, dismiss her feelings, or decide not to investigate the encounter. On the contrary, they nodded at her and asked her questions to get a full picture of it in their minds. Once we were through speaking with Rachel, we called Steven to the J.C.

Steven came into the room convinced he had done something wrong. He was visibly nervous when he sat down in a chair off in the corner. The J.C. clerk read him the face of the complaint and asked for his side of the story. Well, he may have been anxious before, but he wasn’t anymore! Steven became very animated, saying “I found a stick and started playing with it. Rachel came over and told me to give it to her because it was hers. I didn’t know it was and gave it back to her after a while.” Again, the J.C. nodded and asked more questions of Steven in order to fully understand his point of view.

After patiently listening to both sides of the story, one of the J.C. clerks suggested a report that read, “no substance,” which in this case meant, there was no rule broken. Then, both clerks explained what it meant to Rachel and Steven and answered their questions until they both understood.

Some might think, “what a trivial matter! Who cares about a stick? I can’t believe they wasted time on this!” It is true that this was not a major crime or infraction. However, it was important to both individuals involved. Rachel felt someone had unjustly taken something that was very important and precious to her. On the other hand, Steven felt his name was being slandered by someone calling him a thief. Two very different perspectives to the same event.

This little story shows how important the J.C. is in order to run the school. This process gives everyone in the community a sense of real justice. It is such a straightforward idea. Everyone wants to be listened to when they are upset. The J.C. provides this opportunity for students and staff members. Quite simply, the J.C. alleviates a ton of pressure and solves problems in an efficient and calm manner which typically satisfies everyone involved.

by Lauren Ligotti
As a new staff member, working at this school has been a wonderful learning experience. It has allowed me to notice certain patterns and common occurrences within the school community. Witnessing them first hand is nothing short of spectacular. My… Read more ›
Monday, July 15, 2013

by Daniel Greenberg
I am always amazed at how many high school graduates have little or no idea of how everyday personal banking works. I mean, simple things like personal checking accounts. I know I didn’t. Well, that’s not the case with Sudbury Valley kids. Without… Read more ›
Monday, May 23, 2016

by Daniel Greenberg
I have been extremely puzzled for some time that our society seems to be eagerly pursuing mutually inconsistent goals, almost as if we are unaware that in so doing, we are trying to go in opposite directions at the same time! Let me give you some… Read more ›