The Institute of Contemporary Art

The Institute of Contemporary Art

A couple of months ago, one of my good friends told me of an interactive exhibit at the Institute of Contemporary Art. William Forsythe, a ballet choreographer, created rooms where a person’s own body movements were the subject.

I immediately felt the students would love to learn about movement from this prospective and it would be a great cultural opportunity. I started to show a few kids this art exhibit from the Institute of Contemporary Art’s website to see if anyone would be interested in going. A couple of people said they would go, so I created a permission slip and waited. About three weeks went by and no one mentioned it to me. I figured the students lost interest. But when I looked at the list I saw that 25 people had signed up! Instead of a small van of students, we had to rent a bus.

The museum is smaller than others in the Boston area. The staff was expecting us and greeted us at the door. They were very friendly, briefly went over some basic rules, and off we went on our own!

The exhibit is on the fourth floor and to get to it, we traveled in a clear, see-through elevator. The museum is on the Boston Harbor, so we were able to see things from this ride for miles. You could see the Tobin Bridge, surrounding towns, and the beautiful ocean. Once the doors opened, there were many things to look at and do. The Forsythe exhibit has multiple rooms. At the entry of each there were specific directions of how he wanted the person to interact and experience his creation.

In the first room, the movements of the spectators were projected with a delay of a few seconds on the wall. People were able to walk, spin, shake, dance, make faces, and watch the image come back looking misshaped and altered. It was hilarious to watch the students making different movements and see their delight and excitement. 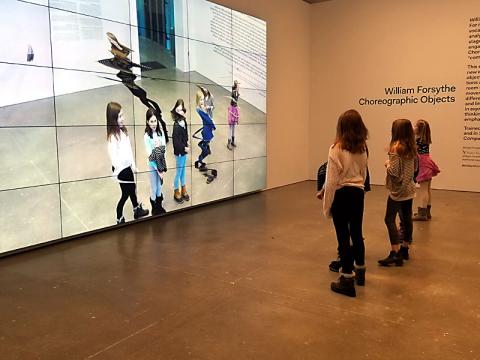 The next room was filled with hanging gymnastic rings. The task was to get to the other side of the room without touching the floor only by using the rings. Because of the long ropes, it was very difficult to get started. People had to essentially do a pull up to begin. Then, they would get caught up in the strings and couldn’t hold up their own weight. It was a blast to see everyone maneuver their way through this course. As you can see from the photos, everyone is smiling and unaware the pictures were being taken. The kids just loved this! 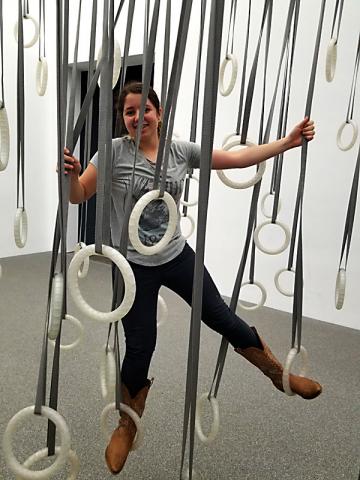 Another area instructed people to crawl through an underpass that was the height of a coffin. This part confused me. First of all, I hate small spaces (I’m surprised I even went into it).  Second, the space forced you onto your hands and knees.The floor was hard and unforgiving. Not to mention, there was very little light! While I'm struggling to find the exit hole, the students are laughing, talking and joking with each other under there. They thoroughly enjoyed themselves, however, I’d be happy if I never have to even think about it again! 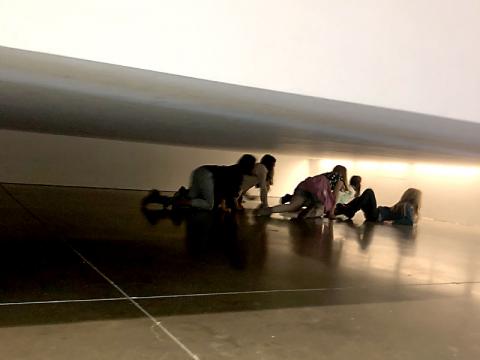 The following place was filled with very thin clear strings strung up to the ceiling on motorized tracks. They would swing back and forth and to and fro. Each string was probably a foot away from the next one. The directions instructed a person to get across the room without being hit or touched by them. Everyone loved dodging and turning to get away from an incoming hit! 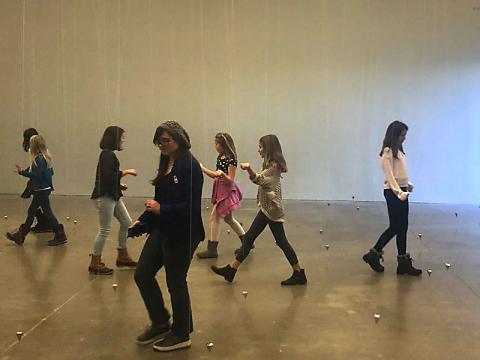 The students were genuinely interested in the exhibits and how their bodies moved in each task. Throughout the entire trip, they were respectful of the art and others around them. The entire trip was a positive experience for all!

by Foss Tighe
While I was reading Daniel Greenberg's essay (“Are 1000 Pictures Worth One Word?”) on why it has been so difficult to convey the SVS experience in film and pictures, I found myself thinking about the evolution of my own understanding about what… Read more ›
Monday, October 22, 2018

by Anika Prather
(Part 1 in The Living Water School School's “Transparency” Series)  It is late. I have just fed my dogs. Everyone is asleep and like most nights, I am the last one up and I’m usually thinking about the school. Tonight, I am thinking on parents… Read more ›
Monday, July 1, 2019

by Luis Gustavo Guadalupe Silveira
For many centuries, philosophers and scientists have been debating human knowledge: its nature, limits and origin. On this last point, we still are trying to understand how much the human being is born knowing and how much he discovers… Read more ›