Each year, the approach of December fills me with both eager anticipation and . . . dread. It is hard to make it through the Thanksgiving break without worrying about the coming month. Then December comes, and dough in quantities large enough to build (literally) a 4-bedroom, 2 ½ bath Colonial on Winch Street must be made. Supplies must be checked and laid in, which sometimes requires several trips to BJ’s. 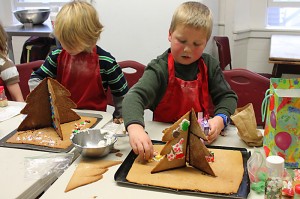 Most of all, schedules have to be worked out. We need time to make trees and cookies with the younger students - and willing older people to help. And we need at least six separate days just for the gingerbread houses.

The house scheduling is a nightmare in and of itself. Much bigger than the actual making. Here's why:

• Everyone wants the days that are good for them—fair enough!
• Everyone has days that are absolutely out for them—when you are dancing in the Nutcracker in Boston that night, it is not a good day to be scheduled.
• Everyone wants to do it with their friends—some people have a dozen or so “best” friends.
• The kitchen is actually quite small, so you can only make so many houses in one day. (Seven is about the top. Eight is an occasional must.)

Most kids don’t care about the exigencies of scheduling. Why should they? They want it to work out the way they prefer, and feel confident that it will. I, on the other hand, want them to be happy too—why not? We are all there to have fun in this activity! This year, for the first time ever, I think, a young child came to me after the final schedule was posted and said, “Thank you for scheduling me with my friends.” I almost fell over from the sweetness. Somehow she knew that it cost blood, sweat, and tears to make the schedule. And this year, also for the first time, only one person complained (a tiny bit) about not having the day she wanted. She also had friends with her on the new day, which made it easier to accept.

So that part went sweetly well. Not easily, but oh, so sweetly.

Several things happened this year that were astoundingly wonderful. Several new staff members learned the whole process of making houses in a way that makes it possible for them to lead, or second, the job. This was a quantum leap in terms of having available responsible adults for the future. It removes some of the burden from the people that have been making houses with students for up to 40 years - me, Dan, and, though he would hope never to have to be in charge of this, Mikel. 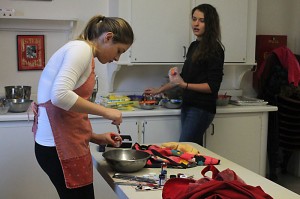 The other wonderful thing that happened is that several teens just couldn’t seem to stay away. There are always a set of people who lead the activity, but there is just so darn much work that there is always more work ready for extra people! What happened this year has happened before, but it just feels so good. A few teens were just . . . always available. Not in a “come and get me if you need me” way, but in a “here I am, shall I make frosting, shall I make colors,” etc., way.

So for me gingerbread this year was less fraught with anxiety and more just wonderful. There were no groups that presented difficulties, and it is hard to imagine that there ever were in the past, although I know that there have been “days from hell” before! But it gave me a chance to think about happiness. 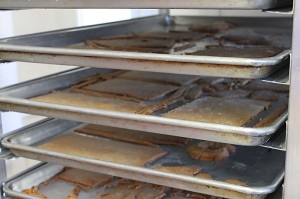 It takes a lot of adults/older teens to make a gingerbread day happen. It starts when the dough gets made by a bunch of them, and it continues as the younger kids need help with every part of the day’s activities, from figuring out if the pans are greased well enough, to using the dough “space” economically. Then there's loading the trays and baking—no younger students are involved with that activity—and helping with  problems that develop during the decorating. 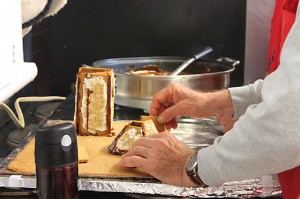 Last, but far from least is putting the houses together, which involves dipping the gingerbread pieces in boiling sugar while the 7 or 11 or 14 year olds stay safely to the side directing the placement.

Then, it's on to the inevitable grinding job of getting it all cleaned up and put away. I often marvel to myself that, at the end of the day, the kids usually don’t thank the whole cadre of people in the room -- often four or five -- who are helping. This year I had time to realize that they aren’t even noticing the helping: they are too busy with the doing. I wonder whether they could even tell you who was helping, if you asked them! They are simply too  exhausted when they are finally done to realize what has been going on. Glazed! 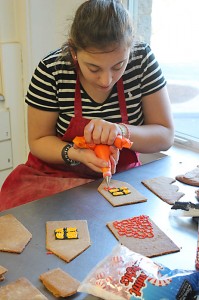 But there is plenty of time in the room to watch faces and to almost see intensity. It is not necessarily a party atmosphere -- hardly grim, but decidedly concentrated and skewed towards one difficult thing after another. But we all get happiness from it. So I guess that must be where happiness comes from -- from sticking to hard stuff, from finishing tasks that you have chosen, from knowing that what you have done doesn’t look one bit like what anyone else has done, even with the same templates, from knowing you have done your share -- and also knowing that you have, often, shared.

And I guess that is why those older kids can’t stop helping, and why staff members want to learn how to do it (even though they are going to get burnt!). That is where our happiness comes from. It is not just a matter of wanting to help children do what they have set out to do. It is not that. Rather, it is being part of a big job, undertaken by a lot of intense people with shifting roles, beautiful and heart-warming when the fluidity of it all coming together happens, as it does many times each gingerbread day, for each house. 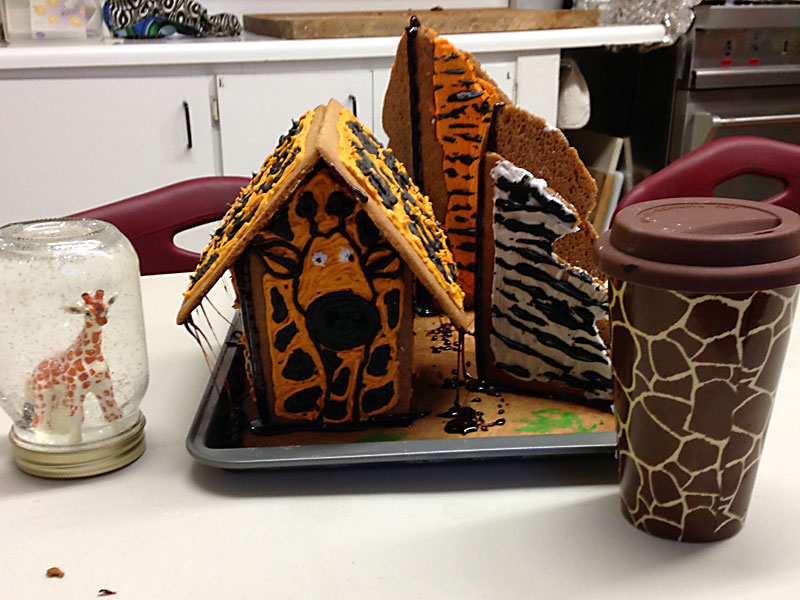 See some gingerbread bakers in action in this short video.

by Foss Tighe
While I was reading Daniel Greenberg's essay (“Are 1000 Pictures Worth One Word?”) on why it has been so difficult to convey the SVS experience in film and pictures, I found myself thinking about the evolution of my own understanding about what… Read more ›
Monday, August 17, 2015

A Short but Deep Adventure in Europe

by Mimsy Sadofsky
In May, the Sudbury schools in Europe usually get together at one of their schools for a few days of deep conversing and even deeper collegiality building. Mostly staff attend these conferences, but some students who are particularly interested in… Read more ›
Monday, March 13, 2017

by Lauren Ligotti
It’s funny how things happen at SVS. Conversation is always a huge part of how students and staff members spend their time. People of all ages are talking about interests, hobbies, and ideas. It flows without interruption. During one of these… Read more ›