Climbing Your Everest, A Conversation

by Hanna Greenberg and Mikel Matisoo

Climbing Your Everest, A Conversation

Hanna: People who hear about the school often say: so everybody will just work on what’s easy for them. And my answer to them is: “Well, what’s wrong with that?” However, my observation is that it’s not true, that a lot of the kids work on whatever is hard for them. If they are shy, they work a lot at conversation. If they want to play music and they feel that they don’t have the dexterity, they’ll spend days and weeks and months on practicing – maybe alone, maybe with other kids – but after overcoming fear, all of a sudden they say: do you want to hear me play? And that’s true about every human pursuit. We see it all the time. Kids – people – don’t like to be bored. They like challenges. We all like to climb our own Everest. And that’s the opportunity that the kids have here, because we don’t watch them, we don’t judge them, we don’t interfere. So they very quietly can work on the things that they know they’re not good at. And the satisfaction at the end is enormous. It’s what they tell me about years later. 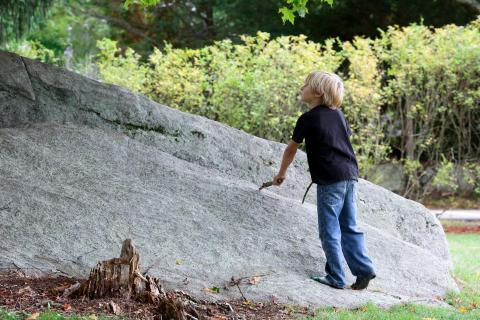 Mikel: The open mic show that we watched the other day was such a good example of what you are talking about. If you think about it, almost all real world activities are actually limited by the difficult steps. If you want to actually do something in the world, you have to figure out how to do the hard part. The easy part you can do, but when you play a song and get to the part that is really hard for you, you can’t actually get up and do the song until you learn the hard part. So that’s what you end up focusing on.
Each person, of course, has different parts for them that are hard. For most of the things that we actually do in the world, we have to be able to get over the hard parts or else we can’t get there. And that’s the part that people are inclined to focus on when they work at something.

Hanna: I find it fascinating that people always say: oh, they’re only going to work on what’s easy for them. What I see is that they’re only working on what’s hard for them. And that’s true about those very adults who ask these questions. Why do people subject themselves to climbing Everest? It’s freezing. It’s steep. You can’t breathe. It’s really, really hard. Why do people love to go up there? I’m sure everybody has areas where it’s true. Every single entrepreneur is doing something that is difficult, but that’s what they want to do. There’s something built into the human soul that finds satisfaction in overcoming challenges and difficulties. Doing something that you already know how to do can be very boring.

Mikel: When you say that, I’m thinking: why do people think that way? Why do they think people are only going to do the things that are easy? And I realized where the situation is that you want to do the things that are easy: it’s when other people are evaluating you. When you’re trying to please other people, you do the things that are easy because you’re going to get that positive reinforcement for doing it: “Oh, you’re so good! You’re so smart!” And the reason people often shy away from the hard things is that they’re afraid that when they do hard things, they’re going to fail, and people will come down on them like a ton of bricks. Why would you do anything hard, if that’s the cost of failure? The mindset that people are going to do easy things and avoid hard things comes out of that environment where you’re being evaluated by other people, instead of being allowed to evaluate yourself.

Hanna: I find it fascinating, because every single one of the people who said that to me were parents, who at some point had a baby. And then the baby became a toddler. And they watched the toddler learn to walk, and fall, and take a few steps, and fall – but toddlers don’t get discouraged. Babies never get discouraged. They just keep doing what’s hard for them until they can do it. Then they move to another thing that’s hard for them all the time. Every parent sees it right there under their nose, with every single kid that they have. And they don’t extrapolate to the older ages. They just see it with the toddlers, who are passionate about learning how to walk and talk and climb and run and eat by themselves. It’s the funniest thing to watch a toddler in a high chair, taking cottage cheese with their hand, putting it on their spoon, and then very awkwardly getting it into their mouth – half of it, while the rest goes all over their face. They do it over and over again!

Mikel: While you’re saying that, I’m thinking: “If they would just watch little kids, then maybe they’d learn.” But unfortunately they were taught that you’re supposed to learn from people older than you, instead of people younger!

Hanna: But they all had their little kids, every one of them.

Mikel: That’s the thing I go back to over and over again, whenever anybody says: well, how could kids learn something like this? All that I can do is shake my head and say: don’t you remember what it was like, the way that a toddler goes about learning about the world? It’s the epitome of self-directed learning. They are engaged, they are satisfied, they’re determined, and they’re almost always successful. We see it over and over again. Yet somehow people think that once children turn six, we have to sit them in chairs and tell them what to do, or else they won’t learn anything.

Hanna: I also think that the people who achieve anything must have the ability to deal with failure and frustration, so it doesn’t discourage them. I think Edison once said that he had learned a thousand ways not to make a light bulb, before he went to a thousand and one. People who really are stubborn and optimistic about achieving their own personal goals have a very high threshold for failure and frustration. It doesn’t stop them. 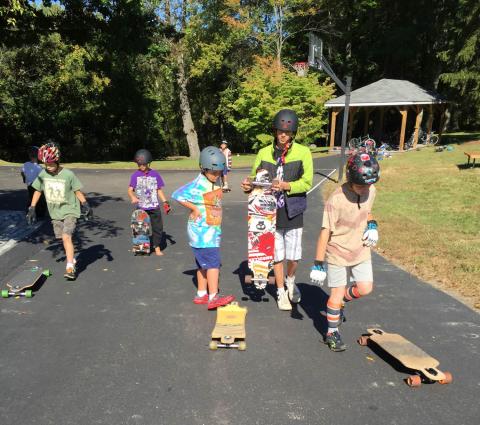 Mikel: And the one thing that’s critical there is that it’s their goals they’re pursuing, and it’s not someone else’s. Someone else’s goals? How can that be satisfying?

by Dana Ortegón
I never thought that skiing would test my commitment to the Sudbury Model. But, it did. Every winter, the school offers two ski programs. Students who are eight or older can sign up to go to Wachusett Mountain once a week for six weeks. Every… Read more ›
Tuesday, December 7, 2021

To Thyself Be True

by Hanna Greenberg
We were talking about birthdays, Audrey, Ben, Christine and I. All three children had just turned six and their birthday parties were recalled with much joy. As a normally foolish adult I asked the kind of questions that kids consider really dumb.… Read more ›
Tuesday, November 23, 2021