by Matt Wolf and Daniel Greenberg

Matt: Why no curriculum, if this is a place for people to become educated for life in the 21st century? Actually, have you even updated the curriculum in the half-century of this school's existence?

Dan: We didn't need to. “No curriculum” was the perfect curriculum forever. After all, what is a curriculum? A curriculum is somebody deciding what is important for people to know in the future? Just pause a few minutes and think about this. Suppose the year is 1997, and you have just completed a first class education in the field of information technology as it existed then. You know 1997 IT backwards and forwards, and they say they’ve prepared you for the 21st century. Let me see. This thing called “Google” didn't exist back then, so it wasn't in the curriculum. And my recollection is that in the year ‘97, online marketing was not exactly the biggest thing in the world. I don't recall turning to Amazon for everything I wanted. It was a big bookstore, offering only new books they carried.

Matt: Wasn’t the foundation in the 90s useful for dealing with coming up on 2020?

Dan: Well, consider those people who were trained to make the best horse carriages in the world in the year 1905. Were they prepared to serve Henry Ford in his revolutionary business when they knew nothing about gasoline engines? Or suppose you went to a fine military college in the 1910 era. You would be taught a whole lot about cavalry maneuvers. Did that lay the groundwork for an effective military in the coming decades?

Matt: Well, whatever the domain, there’s no permanent perfect knowledge.

Dan: Yes, but major cultural changes used to occur relatively slowly until the 21st century. Now, you're “out of date” almost immediately, on the scale of history. How many people are happy with a 10 year old computer?

Matt: I mean surely some basic things such as reading, writing, and mathematics haven't changed all that much as regards basic computing.

Dan: Well, let's put it this way. I remember the first computer building that was built at Columbia University. I was there when they built it. It was the size of a hundred room hotel. And there was one giant computer in there which was powered by radio tubes. Who knows what radio tubes are today? I learned about them in my physics course in high school. Then these things called “transistors” came in. Do I have to say more? There's no “preparing”.
As for “basic mathematics”, I always tell people who talk to me about math: if you were in a supermarket and you were trying to check out, and the cashier took out a pencil and paper and wrote down the prices of all the things that you put on the counter after he weighed them – no bar codes or price tags – and then added the column of figures by hand, how happy would you be with that? In my lifetime, it all changed. I went to Israel in 1952, and that's the way the grocery stores were! You went to the store around the corner, and you stood and waited ten minutes while the cashier wrote down all the prices and then laboriously added them up, and the next person just waited. Who does math by hand? Who ever heard of long division in the real world? Why would anybody spend a minute on long division when everybody uses a calculator and nobody would even believe something you did by long division?
There's no such thing as a curriculum that prepares you for the future and if there are really basics that everybody needs to know, why do you think that children won't figure that out for themselves and get it real fast on their own?

Matt: On what basis do you think that children can decide what they need to know?

Dan: Evolution. Mass education only started about 150 years ago. An awful lot of stuff was done by the human species up until then, and none of that depended on a school curriculum. How did it happen? Where did these people even dig up the crazy idea that you need schools to prepare children for life as adults? Did Shakespeare get a degree in creative literature? Did Beethoven go to college to learn music composition?
Having a formal, curriculum-driven education doesn't guarantee anything – not civilized behavior, not anything beneficial to society.

Matt: So why have school at all? If making a curriculum is an exercise in futility, why bother?

Dan: That's a good question. And the reason is that in the current socio-economic reality you've got to give children a safe place to grow. In the old days, in villages, children could roam free and then learn to become adults just by being in the village. Today, our modern industrial society is not safe for children. There's no place for them in the world until they become old enough to get into the labor force. We don't have a place for very young people where they can be immersed in the kind of life they're going to have when they grow up – where they can live that life. Sudbury Valley is that place. 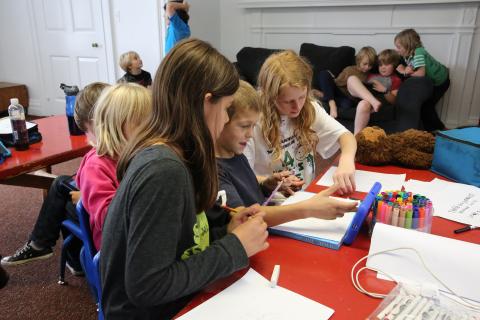 by Hanna Greenberg
It isn’t often that young children talk about their struggles with ethical or psychological issues, but there is no doubt that as they grow and live in a community they grapple with such issues. Since they usually don’t have abstract conversations… Read more ›
Monday, September 4, 2017

by Hanna Greenberg
This blog was originally published as an article in our journal, May 1, 1994. Somewhere I read this quote by Lotte Bailin: "Instant availability without continuous presence is the best role a mother could play." A lovely quote, I thought, and I let… Read more ›
Monday, October 10, 2016

by Lauren Ligotti
The school year has started with a bang! Students and staff are excited for activities and work to begin. The amount of fundraisers we recently had is a good indication of it! Now that it is the beginning of October, all of the corporations for the… Read more ›