On the radio a couple of weeks ago, I heard a man talking about educational reform, and what they consider progress made with young children’s education in Illinois in recent years. He talked about a goal, which he called “agency”. The word struck a chord.

We do, indeed, all want our children to have agency. Defining it is not too easy, but I think it means the kind of self-confidence and competence it takes to meet the world; it has to do with trusting your own independence. A free agent—and agency seems to condense this definition—is someone whose actions are not constrained by others.

Sadly, the more intense the educational intervention is in other schools, the less agency, in fact, students are able to develop. They are more likely to become sheep than free agents, unless by some wonderful chance they rebel and refuse to believe that the schools are acting in their best interests.

I thought how sad it was that they were busy figuring out, and throwing funds into, programs to develop the trait that is the exact trait we see in every child at Sudbury Valley: Agency.

Many things over the years have illustrated this quality in our kids. It is usually the thing that makes visitors do a double-take, and it either makes them realize they want this type of education for their kids, or causes them to run quickly away, terrified of kids who exhibit agency.

One of our students, Debby Fowler, describes her first impression of people here as a teenager coming for an interview, and says that this impression has been reinforced during her time here, “I find the students here are more self-contained. They complete themselves and they don’t blur into other people... When you’re in a room in Sudbury Valley and there are a bunch of people, they’re not a group... It feels like you’re among a number of individuals that aren’t blurred at the edges when they interact with each other. Their personalities are more defined.”

“The very first time I walked in here for my admissions interview, one of the most powerful things I saw was kids walking anywhere they wanted to. Some people were on the basketball court, and then they would walk to the swings, or kids would walk between rooms. That felt really powerful to me because... being able to move where you want to, independent of other people, has a big effect... You can do what you want, you can also go where you want... It felt really powerful to me.” 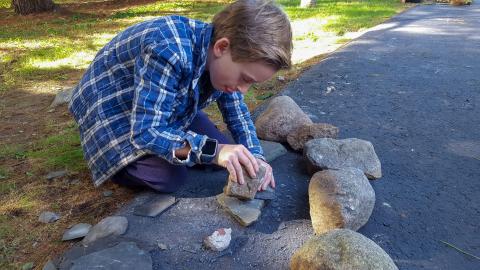 Agency. We’ve got it.

by Wendy Lement
When I was voted in as a new staff member last spring, I knew I’d be doing a lot of cooking. Since the school’s inception cooking has been a vital part of SVS’s culture. The seeds for my own career as a chef were sown in that same kitchen. I baked… Read more ›
Friday, June 25, 2021

by Mimsy Sadofsky
As they decide whether or not to send their children here, or as they fret about their children while they are enrolled here, there are a whole series of concerns parents talk about and worry about that are related to what looks like the random way… Read more ›
Monday, October 9, 2017

Lost Over the Summer

by Foss Tighe
Summer vacation is over and on the way to school I make my now predictable joke. “Did you complete your assigned summer reading? How about that social studies diorama for Danny?” My kids smile and roll their eyes. My mind drifts back to when my… Read more ›