They Sit in Court

They Sit in Court

Whenever we have an Open House at Sudbury Valley School we often get the same question, “What do the kids do all day?” Underneath this question is a broader one, “Can you prove to me that this place works?” On the spot, the short answer is, “No.” The truth is that they do all kinds of things. They play music, paint pictures and construct digital worlds. They share devices, throw pots and spin cartwheels in the yard. They invent games, plan events and converse constantly. But all those are really only the surface reflections of a very deep pool. 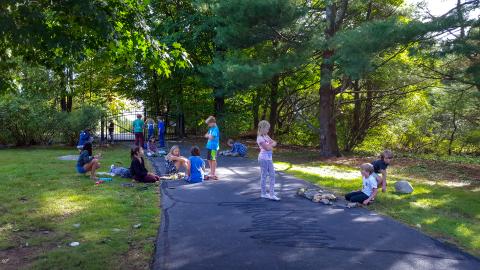 After the Open House, I considered this question anew on my rounds at school. There was a bunch of kids of widely varying ages crammed into the nook next to the Pillow Room. They had been gathering there lately and their chairs had now spilled into the Sewing Room. There was a particular cast of characters at this particular time though this circle was not a clique. In fact, there were new people pulling up chairs all the time. But there was a formality to this group that belied the scene at hand. “They sit in court,” I thought.

That was an odd turn of words to pop into my head. It didn’t mean that they were sitting in a courtroom or waiting on someone but rather that they were courtiers of a great empire who sat pondering important topics; noble dignitaries of a sovereign state who had a prudent attention for one another. They were coming into their own at their own stage; they were incrementally assuming responsibility for the school and its governance, and they wore this in their confident manner and poise. They owned the favor of the community through some virtue of action. An essence of respect permeated the proceedings. This was not the kind of interaction commonly found in other school settings. 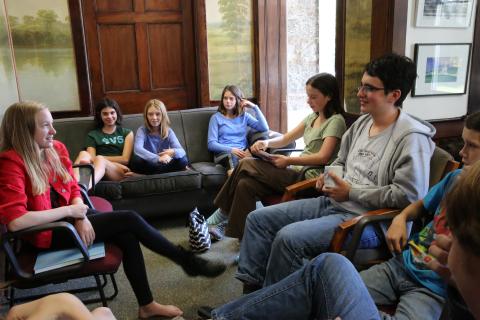 This kind of exchange wouldn’t be easily fostered in a public schoolroom where classmates are all the same age; and the idea of being instructed in this kind of activity by a random adult would seem rightfully ludicrous to them.  Moreover, any adult from that world that came upon this scene that I witnessed would be unlikely to see it for what it truly was. Yes, the kids in this circle were just hanging out, but not as a break from school. They were living in the world already;  body and soul.

These groups radiate cordiality. There is a lack of ageism. An atmosphere of acceptance and kindness can draw even the shyest kids into the fold. Aberrant juvenile behavior is tempered by frankness and grace; two often overlooked byproducts of a collective gratitude for the rare freedom they hold dear.

This ever-changing association of individuals is a continuation of other such groups that have spontaneously sprung up throughout the school’s existence. They are a means by which people assert themselves and become centered in purpose. Maturing kids find agency and a footing in the community while becoming increasingly aware of the distinctly fortunate circumstance of being a Sudbury Valley School Meeting member. Their intellect is focused on how to turn that circumstance to advantage in the world. Among them, leaders arise and take hold of opportunity. The young aspire to this faculty and grow into these roles as the waves of youth replenish the school.

I am fortunate to witness this great, swirling improvisation. I find it fascinating that, untutored and without provocation, the students sit this way in a court of their own making; contemplating the world, building their confidence, acquiring knowledge of people and culture, and envisioning the great possibilities which lie at the root of their own infinite potential.

by Jay Flood
On May 9th at noon the SVS Music Corp gave its first concert since it was disbanded three years ago. I was part and parcel to the proceedings, being the only adult with the privilege (tech and mixer), and I got to watch all the trials and… Read more ›
Monday, September 9, 2013

by Scott David Gray
Sudbury Valley is an incredible place. Literally so, in that many people just don’t believe that any school could be so pleasant and well-functioning. At least not until they have seen us in action. The aspect of our culture that surprises and… Read more ›
Monday, May 8, 2017

by Wendy Lement
Part 1 - The Architects Where can insects, rabbits, and snakes go when they’re sick or injured? Two young SVS students not only pondered this problem, they took action. They had a history of creating entire worlds out of sticks, leaves, rocks,… Read more ›