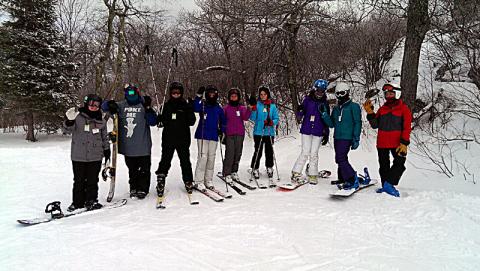 It is odd but true that the things we most value in our lives are things which are hard to quantify but easy to feel.

We all want our epitaphs to say that we were good and decent folk, not that we were rich and thin and got all A's in school.

So why does our culture subject our children to years and years of measuring their growth and learning by mathematical analysis? Why are our kids graded on scales and curves, evaluated according to statistical averages and compared to others in their grade with pseudo-scientific accuracy?

It boggles my mind how we expect our young to learn that what really matters to us is not so easily measured, when what they learn in school is always numerically evaluated. How we loathe the little nerd who brags about his grades or who always shows off how clever she is! Yet these children are just reflecting what we teach them in our schools. I feel acutely uncomfortable when I meet a college student and ask him/her about their experience and they tell me that they are on the Dean's list or what their GPA (grade point average) is. It reflects so clearly what these young people think we adults want to hear. It embarrasses me to see them so transparently eager to please. It also is very boring. Where is the excitement about learning new things, about meeting interesting people, about broadening horizons? Aren't these what college is about?

At SVS we have no grades, we don't measure anything. We just let the children grow and learn and ripen in the ways they choose to. It is so simple and clear, and yet it is so difficult. It often feels as if no growth and no learning happened or, if they did, that no one cares or has taken notice. When the whole society in which we live believes that children and parents need constant accurate measurement of the children's progress, it is unsettling to be alone. A child's confidence can be shaken when s/he is faced with the kid next door who is doing 6th grade math at age 10 or reading at 9th grade level at age 12. They start to wonder about themselves. Are they learning enough? Are they up to par with their friends from other schools? It is our job as their parents and teachers to assure them that they are better off without constant external evaluation, often devastatingly negative and always in conflict with their natural development. We have to remind them that we trust in their instincts and good judgement and that we believe that they will be able to acquire the skills they need when the need arises. We also have to accept that being free exacts its price -- the loneliness of choosing your own path rather than joining the crowd and enjoying the comfort and assurance of being part of the majority.

For example, there is no question about it: to let your small child decide when to learn to read and write is a major test of a parent's faith in the child's survival instincts and ability to understand what is required in our society. When the child delays learning to read until they are eight or nine, or even older, it is indeed a test. But SVS has witnessed quite a few such children and all have learned to read. Many of them have become avid readers and love delving into books, often more so than their friends who learned to read much earlier. When I personally get overwhelmed by feelings of this loneliness I need to think how SVS is an American school designed for the American way of life, where life, liberty and the pursuit of happiness are valued above all else. I think of our graduates who function so excellently in our society, at work and in their families. Then I realize how well suited the education at SVS is to life in our country and I feel less weird about our endeavor.

That brings me to the point I want to make. It is the intangible things that happen all the time at SVS that are so important for the children's healthy development into strong, confident adults. It is only rarely that even the staff can get glimpses of what it is that makes our kids so special. I would like to tell you of two such incidents. Not because they are extraordinary, but because I saw them.

I was down-hill skiing at Wachusett Mountain with five children aged eight and nine, two girls and three boys. They led me to a path along which there is a lovely observation hut built of granite. It is set about fifteen feet above the path. The kids took their skis off and started to clamber up to the hut, no easy thing to do because the way to the hut was steep and icy. They were wearing ski boots which are stiff and cumbersome and quite unsuited to walk in, let alone climb a steep and icy hill. I knew that I couldn't even attempt the climb so I settled down to watch the kids. They slipped, and slid, and fell, over and over again. They tried one way, fell all the way to the bottom and then moved to another place. Eventually they all got up to the hut, their faces beaming with joy and triumph. But watching them made me a nervous wreck. The icy slope was rocky and dotted with trees so that if a child lost control s/he could hurt themselves. They almost did hurt themselves, and the easiest thing for me to have done was to be an adult and forbid them to continue their climb. I wanted to do it but I couldn't. I felt that it would be a sacrilege to their spirit. I was taking a risk which I thought necessary to take.

The beauty of the scene cannot be put adequately in words. The ambition to succeed, the tender way they helped each other, the feeling of achievement uncolored by competition and above all the care and intelligence that they all displayed while climbing helped me to decide to trust them and let them continue doing this dangerous activity. They chatted and played up there and I was worried all that time about how they will get down without hurting themselves. Out of the blue, R. told me that next year his younger brother is going to come skiing with us. (A fine time to tell me, when I was questioning the wisdom of him being there, since he himself is only eight years old!) I said that his brother may be too young, and R. said "I'll take care of him and comfort him when I feel he's having problems." It was clear to me then that R. was keenly aware of his own growth and maturing process. It was no accident that, having made it to the hut, R. felt strong and confident and thought that he can take on the responsibility for his younger brother. When the skiing first began, this same R. had a hard time getting from the van to the lodge with all his gear, and now, two months later, he was ready to teach it all to his kid brother.

I was getting chilled so I asked them to come back down. Eight year old L. told me that I could leave them. I replied that I was scared because of the dangers, and she assured me that they all help each other and take care of each other. I told her that I knew that but that I preferred to stick around until I saw them all safely down. She happened to come down first, and she stood with me watching the others descend. When all came down safely she turned to me and said, "Now I understand why you wanted to stay. It is scary and dangerous!"

The second incident happened in school. A bunch of teenagers were sitting around the lounge when a visitor joined them. One by one they drifted away until one girl was left with the visitor, not wanting to be rude and leave him alone. The other kids realized that she was stuck with him and came back to join her. They felt guilty for ditching her while she was being polite to the visitor. This was a very little scene which showed so much about the kids' sensitivity and commitment to each other and the school. Children like this grow up to be good spouses and parents, good co-workers and bosses.

These are the things on which the students at SVS focus, in addition to all the other skills they learn. The staff rarely has the chance to witness these when they happen. When we do, we understand our school that much better.

That’s just what SVS kids do

by Karin Charles
Our family moved to Framingham over six years ago, mostly so our children could attend Sudbury Valley School. When we were researching schools, my husband and I read every book we could find about SVS. My favorite is “Kingdom of Childhood,” the one… Read more ›
Monday, February 12, 2018

by Jean Leaf
This was published in our Janury 1998 Journal; a note from Jean and Rick Leif about what their daughter is up to now has been added. Quite a lot has been written about what it is like to be a student at Sudbury Valley School, but I would like to… Read more ›
Monday, August 27, 2018

by Jay Flood
On May 9th at noon the SVS Music Corp gave its first concert since it was disbanded three years ago. I was part and parcel to the proceedings, being the only adult with the privilege (tech and mixer), and I got to watch all the trials and… Read more ›