Ever since I started teaching music composition at a conservatory, I’ve been comparing the progress of the college students with the Sudbury Valley School kids I’ve observed in my time as a staff member. In each case, they are trying to work out whatever problem is in front of them, and move on to the next level of where they are headed. And having engaged in this activity myself for many decades, and particularly as a musician, I am sympathetic to their struggles.

On the days I’m at the college, I have to arrive early to get a parking spot and also a desk in the faculty lounge. There’s a particular moment that I anticipate when I come to the great, spiral staircase. I don’t know if it’s because the building is circular, like a three-story, squat tower of thick stone, or because the staircase is circular with wood-paneled walls—akin to a nautilus shell in its taper up to the open balcony which leads to the slim stairway to the third floor—but the sound of all the musicians practicing is magnified on this staircase such that each step brings a new sound into focus, as all the pianists, clarinetists and cellists, in all the various rooms on all the different floors, earnestly wrestle with their pieces in a great cacophony of energy.

At this time of day, I am hearing the early birds who are putting in their hours in the much-coveted rooms; and these are usually the best musicians. As the day wears on, the tone and timbre changes, and not always in the most agreeable way, to the point where it can sometimes be hard to think. (Try analyzing the score of a subtle movie scene while a soprano really explores “high C” next door!)

On leaving the staircase, I am also eager to hear who is practicing in the rooms off the long hallway to the faculty lounge, since certain students can make it difficult to focus; especially if they are in the practice room adjacent. The old doorway between these rooms was boarded up with plywood which turns out to serve as a perfect soundboard amplifier from the practice room into the lounge. So I cross my fingers when passing this room to see who is likely to provide my entertainment, or my punishment, for the next hour or so.

Through this wall, I hear the old professor of viola, struggling to maintain what once was rote; the tone-deaf bassist sawing away in fretless phrases; the pianist who, by virtue of her perseverance, may manage to become a beloved music teacher; the gifted artist whose touch is miraculous; and the unfortunate soprano who was told by her family that she had a gift and someday will discover that they were wrong.

When I was in grad school, I had a professor of composition who was brutal and direct. A student walked out of one class after a particularly harsh critique. Another student commented that this was mean treatment, to which he replied, “That guy might become the greatest photographer in the world, and I just did him a huge favor.”

So when I hear a musician through the wall who I know should probably not be there, the thought occurs to me that a Sudbury Valley student would not be in this situation. 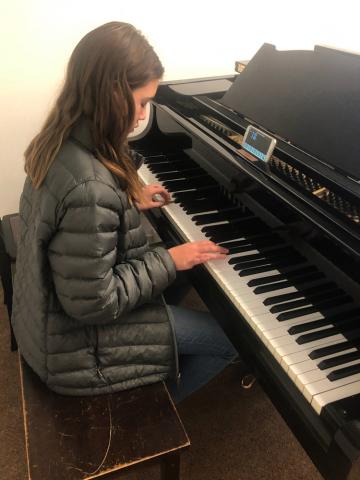 If an SVS student were in that room, they would already know that they were supposed to be there. They would have been dashed upon the rocks in a sea of opinion which defines and shapes character in the constant interaction with people; and they would not be, in their twenties, searching in vain after a dream which they should have long realized was not a realistic path for them to pursue. In effect, they would have already grown up and would not be wasting their time and money. They would possess the ability to assess their own strengths and weaknesses having not been prevented from doing so. They would have honed in on all the details of everything there was to know about whatever it was they had their eye on.

In these moments of contemplating a thing so grand as the maturity of a Sudbury Valley student, I think of my own kids and how fortunate they are to be at SVS, and how full and rich their lives will be, knowing themselves as well as they do at such a young age.

The Heart of the School, Two Takes

by Daniel Greenberg, Mimsy Sadofsky
Take One by Daniel Greenberg If you happen to be sitting in the large front room called “the sewing room", you might notice that every day at 11:00 a.m., eight people walk into the adjacent book-lined “seminar room". What you are seeing… Read more ›
Monday, May 20, 2019

Portrait of a Culture

by Mimsy Sadofsky
What do SVS students have in common? What are the distinguishing features of this vibrant collection of people whose energy strikes you the moment you encounter them? For a long time I have been trying to articulate the answers to these questions.… Read more ›
Monday, July 27, 2015

by Hanna Greenberg
A young girl of nine or ten asked me to teach her math. I gave her some problems which she enjoyed doing. Next day she came to me with many sheets of paper covered with similar problems which she made for herself and then solved. She is obviously… Read more ›