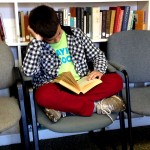 The SVS library is making me so happy. I am much more of a reader than a collector of books, but libraries play a big role in my life. As a teenager, I skipped school a lot to go to the library to wander around the stacks. I was looking for something, and I did not quite know what it would be - but when I found it I knew it was it.

One of my very early memories of books - way back from before I could read - is playing with the paperback detective novels on the shelves behind my father's favorite reading chair. What I would do is take them off the shelf, stack them up, organize them, and try to put them back in various ways, trying to make them fit and somehow look good.

How did I organize them? By color, design, size. I clearly remember an intriguing bunch of mostly bright red books sporting a distinctive black and white stripe pattern on the top of the spine (Rex Stout?), and another group that was mostly white (Simenon!) Some books had a little owl graphic on the spine, others a stylized image of three fish. Then there were odd ones that did not seem to go with any others. And some came in slightly different sizes, sticking out here and there.

A bit frustratingly, there wasn't ever enough space for all of them to fit, so after experiments with vertical positioning and horizontal piling, I resorted to laying some books flat on top of the rows.

Altogether, not so different from what I spent the summer doing at SVS.

Last summer, I not only had the pleasure of thinking back to this utterly absorbing childhood activity of mine, but I was also allowed to relive it when I took over the cleaning, sorting, and arranging of the  SVS library.

As I began to discover as a child in my world between reading chair and bookshelf, you can arrange books based on a variety of factors:

•Spine design -  My past favorite

•Publisher - The French bookstores do this and it looks fabulous)

•Your bookshelf - You need an extra sturdy one for the National Geographic Magazine! (Its paper is made with clay and heavy as brick!)

Organizing by subjects and authors is popular. The alphabet is everywhere, and does not only provide the first building blocks of what's in a book, but an overarching system for spreading them over shelves and rooms.

Books seem to suggest order: start picking them off a shelf or begin stacking up some that are lying about in a heap, and themes begin to emerge, categories evolve. You put some together that seem to go together, like socks, sort of, and before you know it you start dreaming up possible systems, with each book a little fragment of a larger whole - until there comes the odd book, that does not fit anywhere, like those darn extra socks.

Better stick to the pragmatic. Book organizing has always been a bit flawed, not just because there is always that one book that is too large for the size of the shelf, but because it is an attempt to organize something the entirety of which is unknown. New books are continuously written and published by humans whose primary interest is not necessarily to neatly fit into an established library category (even though that might help in getting published.)

For example, where were all the computer books in 1900? And what is a computer book anyway? A book about desktops and laptops? Programming? Software? Games? Electronic Social Media? Information Security? All of the above and more? What an explosion in new categories!

So what should the SVS library look like? How should it be organized? Around 2010, the SVS Library Committee decided that the library should be as "browser friendly" as possible, and books should be arranged in a way that easily communicated what was on the shelves. The Library of Congress system we had been using didn't satisfy that purpose, so the school began working on a large scale library re-organization project.

In Phase 1, books are being arranged under headings such as Biology, Religion, Literature, Art, Architecture, Applied Science, Chemistry, US History, derived from what we have on the shelves - and we have a lot!

In Phase 2, within each heading, books are being further arranged according to what makes sense given the books we have and continue to add to the library. Literature is arranged alphabetically by author. History by themes such as The Civil War, World War I, World War II.

Every room will have a list of the kind of books it contains and how they are arranged—not by color, I'm afraid.

We are in the midst of it, and it is very exciting!

Most marvelously, because our library is not a museum, but an entity that lives within its community, it will never be finished, so we can continue to play with books at SVS.

by David Greenberg
This article is reprinted from The Field, the newsletter of Fairfield School. There is a debate among educators regarding the best way to teach reading and writing. In one camp are the whole language proponents. They believe that reading and writing… Read more ›
Monday, January 29, 2018

by David Greenberg
This article is reprinted from The Field, the newsletter of Fairfield School. There is a debate among educators regarding the best way to teach reading and writing. In one camp are the whole language proponents. They believe that reading and writing… Read more ›
Tuesday, July 14, 2020

by Jen Harnish
Reading for pleasure and knowledge has always been a meaningful part of my life. So when my three children started SVS at young ages I couldn’t help but wonder how they would learn to read without the direct instruction I had experienced as a child… Read more ›