“Kids Don’t Learn Anything at SVS”

“Kids Don’t Learn Anything at SVS”

The over-riding fear that parents express when they approach this model of education is that kids aren’t learning anything. Of course, when confronted, they will admit that kids do learn things all the time without the vaguest coercion, but it still doesn’t make them much happier. It is clear to them that it is not exactly that they won’t learn anything. It is that there is a set of “right” things, and they will not learn those. 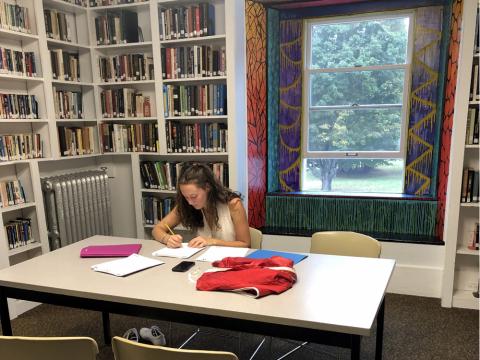 But what are those “right” things? This is something that SVS examines in almost every piece of its literature, because it is, on the face of it, a laughable idea that such a category exists. But it is also a tenacious idea. The 21st century is kind of empty of “right” things, most particularly when it comes to the “right” things for everyone to learn. There is so much variation in the possible ways to spend your life, and such a plethora of information easily available, that there can’t be much that everyone has to know. And the things that people do have to know in the 21st century tend to be what this school is all about. You have to learn to be a seeker of knowledge; it will not always come to you in little chewable candy-sized pieces. But how can one be afraid, after watching a small child learn to walk, and to talk (in my family it was reversed, but I do understand that is odd), that they are not self-motivated? What a determined constant struggle life is for babies and toddlers. One is unable to stop children from exploring. In fact, the whole prevailing schooling process, from about the age of 33 months – yes they divide it carefully like that in the world of pre-schools – is a process of helping children learn that open exploration is to be avoided, play is to be segmented judiciously into their lives, and more schooling has to be prepared for. Really. Usually by 3 years old, and certainly by 4. Few and far between are the oases where a pre-first grader can spend time playing with a group of kids, inventing games together, solving problems, and even where they exist, it is with the suspicion that it is somehow wrong – those 4 and 5 year olds should be getting “reading readiness”.

A point about reading readiness. We all know readers that we can’t imagine wandering around without print in hand; and there are people who never learn to love reading, and live perfectly happy, successful, and intellectually rich lives. It isn’t that they can’t read: it is not something that draws them except when they need particular information. At that moment it draws them really hard! Then there is everyone in between. But the truth is that we all know how to read.

I am in the always-hanging-on-to-some-print-material, first group. But I know so many major readers who didn’t learn until several or many years after the school-approved six years old, but learned when they wanted to do it. Really, when they needed to! I remember a father at the school telling me, in the early ‘80's, that his 11 year old, who had been read to non-stop for about 11 years, suddenly expressed a need to read Shakespeare. Not much happened in between not knowing how to read and starting with Shakespeare. For one of my grandchildren it was Harry Potter. And that was after the series had been read to him often! And owning the tapes!

But that was really a digression. Because the hard, and hard to take too, fact is you don’t really have to know so much about reading. Yes, you still have to read in the first quarter of the 21st century, but who knows what is ahead? Even now you can get almost all of the information you need by ear. Maybe all of it. Audio books, audio files, audio conversions of everything written from email to texts to...you name it. There are ways to get it. The technology is advancing extremely rapidly. In fact, Braille, an amazing tool for blind people which uses raised symbols to read, is falling into less use, and probably, for hearing people, will eventually disappear. It is sad to think of such a magical invention becoming less useful, but wonderful to know how much is available if you can hear!

Should we even mention handwriting? The temptation is, let’s not. Too many of us are ashamed of our inabilities and in awe of the abilities of people who, through coordination or will-power, enjoyed learning handwriting, even up to old age. When my youngest son was handwriting age – well, maybe even 12! – his brother was in graduate school. The older brother could only print. I used him as a “bad example” to try to get my younger son to write. He must have thought I had lost it! If his brother had distinguished himself academically, as he had, without cursive writing... Needless to say, I failed. Both are middle-aged; their handwriting is legible. Mine isn’t. More to the point – they communicate articulately through writing (they have computers!); they handwrite rarely!

Today each student at SVS has to choose from a vast number of possibilities for how to spend their school time and their lives. There is no reason to think the standard curriculum is at all that useful for everyone, let alone for anyone. Our children will grow up to be somehow more than we are – more well-educated, more at home in a swiftly-morphing digital world. Able even to understand and use virtual reality!

by Daniel Greenberg
It is not uncommon for people who come to an interview inquiring about enrollment to ask, “What activities do you have at Sudbury Valley?”  After all, it is a school, and schools usually have, in addition to regular classes teaching the… Read more ›
Monday, December 19, 2016

by Mimsy Sadofsky
An Open Mic is a scary thing to organize. After all, the success of the endeavor depends not on who says they want to sing, or play a song, or dance, or do an act, beforehand, but who actually steps up and does it at the time it is happening. In a… Read more ›
Monday, July 21, 2014

by Hanna Greenberg
This post was originally published in The Sudbury Valley School Journal, volume 30., number 4, March 2001. “When God began to create heaven and earth, the universe was chaos and disorder, and darkness enveloped the void.” (Genesis 1:1) One day I was… Read more ›