We have always had Alan to turn to for support, the kind of support that may not always agree with your ideas, but will not assume you are worthy of disdain if he holds different views (that turn out, of course, to be correct). Alan always offered the kind of support that urges you to consider your own beliefs, and he believed, it seemed, in every person’s fundamental high moral quality and intelligence.

I first met him in the early years that I was associated with Sudbury Valley. In the early 1970's, I began to go to Trustees meetings, because there was nothing about the philosophy of, or the history of, or the running of the school that I was not interested in. I had two kids, and eventually three, who went to school here for virtually all of their lives up to graduation, but two started back in the early days, when we were not yet so positive from experience (more from theory) that this really was the right way to educate children. We all thought so, but so do lots of other people think that some startling new ideas are correct, when they often are not. It was a philosophy reached by reason, but do any of us believe life is really reasonable?

Alan was the rock. And he continued to be the rock through a couple of decades as President of the Sudbury Valley School, Inc. He was a regular, on the ground, educator - I certainly was not - and he thought these avant garde ideas were worth putting to the real test, the test of time! He was a regular guy. He did not ever seem eccentric. It is hard to say which of the others of us weren’t when I think back, even though I’m sure most of us thought we weren’t!

For me, Alan embodied the determination and fortitude to see the ideas of the school through. And he did. Through disagreement after disagreement, in the Trustees, but also in the Assembly, which included parents, and met twice a year. Debate was civil. Debate was courteous. Because Alan had that demeanor and quietly assumed it from others. He was a beautiful human being for his entire life, and always an unselfish and unassuming person. He will be deeply missed.

I think about so many different things when I think about Alan; I knew him as the years went on in several different roles. I think how unstintingly he gave of himself to forward and expand the development of this model of schooling. And I think about his habit of daily unstinting exercise which allowed him to work and stay healthy well into his last years. I also think how he (alone, and not when he was young, either) turned our barn from a barn into an all-season building so that we had so much more room and so many more facilities. 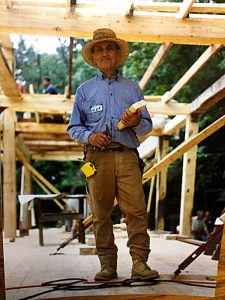 A friend, a founding member of Fairhaven School in Maryland, sent me a beautiful photograph of him wearing on-the-job clothing in a framed area, that was taken during the original creation (they did it themselves, from the ground up, with Alan’s steady help) of their school’s building in 1997-1998. He had the creds – he had followed his long career in education with a career as a builder. One of their main rooms is named after him. She, Kim McCaig, wrote, “This is how I remember Alan from the summer we built the school and a picture of our circle room dedicated to him. The plaque has been there all these years--the kids often ask who is Alan White, and we get to tell the story.”

Mark McCaig, one of Fairhaven’s founders, said, “We received the news about Alan’s passing yesterday, and we are saddened by the loss. The main room in our first building is named the Alan White Room to honor his generosity and support back in '98. A singular fellow, that Alan.”

Neither this work nor the several times he visited other Sudbury schools for as long as a year to help with staffing problems was paid work. It was Alan’s work to help what he had come to believe in so strongly. He found ways to travel frugally and to live frugally so that he could do everything possible for this model of schooling. Yes, a singular fellow.

Just before winter vacation we received a thank you card from a woman (she is probably 57, but she will always be a girl to me!) who had visited this year, one who had been a founding student of SVS, and a remarkable example to so many other people. She said, “The school feels like I remembered it – full of life and vibrant. I feel more than ever we need to have Sudbury Valley Schools everywhere. . . . The school is a treasure for the betterment of society and a sweet memory for me.”

I am not at all sure we could have done it without Alan’s leadership.

by Mimsy Sadofsky
During the last Open House, in October of 2015, there was a remarkable interaction. It didn't surprise me, but it greatly pleased me. Unfortunately, I don't think the guests who were with me had enough context for what they saw to appreciate it.… Read more ›
Monday, May 8, 2017

by Wendy Lement
Part 1 - The Architects Where can insects, rabbits, and snakes go when they’re sick or injured? Two young SVS students not only pondered this problem, they took action. They had a history of creating entire worlds out of sticks, leaves, rocks,… Read more ›
Tuesday, September 27, 2016

by Hanna Greenberg
Musicals and plays happen at all schools. It is always a big deal to produce them, what with numerous rehearsals to arrange, costumes and props to procure, and finding the talent in the student body to perform all the roles, big and small. What was… Read more ›