The Learning Disability Epidemic: Who Is Playing with our Minds?

The Learning Disability Epidemic: Who Is Playing with our Minds?

Here's a real puzzle: when I was growing up, there were no such things as “learning disabilities” in our classrooms. There were kids of all kinds of different abilities and interests, and we were just plain different from each other. Nobody said that a person who couldn't do math or couldn't read well had “a disability”; rather, it was accepted that they were developing in a different way. Since then, there seems to be a growing epidemic, which the Center for Disease Control should probably be looking into: in the span of a few decades, children all over this country have been developing “diagnosable learning disabilities” at an ever increasing rate. How did this take place? There are no known bacteria or viruses involved, no detectable defects in any anatomical structure. What's going on?

The answer is simple. Self-proclaimed experts have decided to establish norms for the knowledge and skill levels of every child, at every age. Children who conform to those norms are developing correctly. Children who deviate from those levels are considered to have one or more “disability” that requires treatment by professionals to make them “normal”. Differences between people have been medicalized. 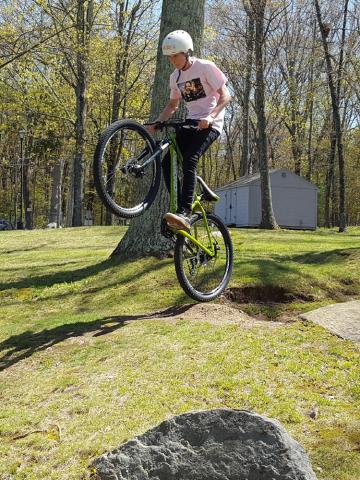 Now, here's the really peculiar part of all this: our culture, that is now devoting itself to promoting diversity in every aspect of our daily lives, has medicalized diversity in the most important features of the human condition. During the time in which children are growing up to adulthood, we want to make them all the same in their behavior, in their intellect, and in their abilities. “Diversity” becomes narrowly limited to some external markers that can't be changed by medical treatment!

“Learning disabilities” as they are currently defined didn't exist when I was young, and they don't really exist as medically definable “disabilities” now. Sudbury Valley School has never recognized them, nor has it encountered them. Yet somehow thousands of graduates of the school have managed to go on to lead successful, happy, contented lives along pathways as different as the alumni are diverse.

How DO They Learn?

by Mimsy Sadofsky
It is the first question parents ask once they try to wrap their minds around the fact that students at Sudbury Valley are, in fact, free to use their time in the ways that appeal to them. And even after we have gone through the whole bit; after one… Read more ›
Tuesday, July 25, 2017

Where did you say that was?

by Daniel Greenberg
Recently, an article was brought to my attention, entitled “Alternative Educational System Sudbury Valley as a Model for Reforming School”. It was a paper presented to the 4th World Conference on Educational Technology Researches, held in Barcelona… Read more ›
Tuesday, May 19, 2020

by Daniel Greenberg, Mimsy Sadofsky
It’s amazing that anybody considers that what's called “a school” in the traditional meaning of the term has anything to do with preparing children for adulthood. To the contrary: it doesn't let them talk; doesn't let them move; it squelches… Read more ›