I have been extremely puzzled for some time that our society seems to be eagerly pursuing mutually inconsistent goals, almost as if we are unaware that in so doing, we are trying to go in opposite directions at the same time!

Let me give you some startling examples from the realm of education, where I first noticed this phenomenon. Consider the matter of creativity and innovation. One of the things for which our country is justly famous is our ability to foster new ideas, create new inventions, develop new systems, and experiment with new lifestyles. You will look in vain throughout history for an example of a society that is more vibrant and original across the full range of human endeavors.

There is not an educator I know of who does not believe wholeheartedly that our schools should be in the forefront of preparing young people to be creative adults. Yet, there is scarcely a school or pedagogical approach in existence that considers creativity in children to be a virtue, or fosters it in practice. On the contrary, children are given no leeway to challenge or reject the accepted curriculum, to question what their textbooks or teachers tell them, or to take the initiative in designing their own paths of learning. At every turn, students are told to stick to what they are supposed to be doing – not to daydream in class, not to deviate from their homework assignments, not to engage in extracurricular activities until they have thoroughly mastered the required materials.

This profound inconsistency in our outlooks leads to another one when the basic virtue of responsibility comes into focus. Everyone praises this virtue, and every school seeks to inculcate a sense of responsibility in its students. Adults carry on about the importance of teaching children to behave responsibly, and educators follow suit by trying to instill such behavior from an early age.

The problem arises from a basic misunderstanding about what the term means. Here’s how the American Heritage dictionary defines “responsible”: “Involving personal accountability or ability to act without guidance or superior authority.” The whole point of this virtue is the exercise of personal choice in an ethical situation, where one has the freedom to act in a number of different ways. Thus, for example, we call parents responsible if they perform caring acts towards their children, as opposed to letting their children go hungry, or be poorly clothed, etc. A parent is not considered to behave responsibly if s/he only provides for their children under a court order, under the threat of a fine or imprisonment if they should fail to do so.

What do our schools do with this concept? They turn it upside down! Children are assigned tasks – homework, in-school projects, whatever – under the threat of punishment if they do not fulfill these tasks (a poor grade, or detention, or repeating the course), and then they are considered to be acting responsibly if they perform these tasks according to the required specifications! You hear it all the time: a student model of responsibility is one who performs as told; the fact that this is done under coercion is ignored, as if it made no difference. This is truly the world of double-think that Orwell predicted for the year 1984 (and come to think of it, he wasn’t off by much. . .).

Then there is the oft-heard call to have our schools produce graduates who are “life-long learners”, an admirable goal if there ever was one. Let’s think for a moment what the term means. We want everyone to be able to master new areas of knowledge throughout their lives – to have the self-confidence, the tools, and the passion to broaden their horizons and to confront the unknown without fear. The key here is the inner motivation of each individual human being to better themselves, to take the trouble to seek out new knowledge at every turn. Life-long learning begins with the actions of the learner, and does not await the intervention of outsiders. 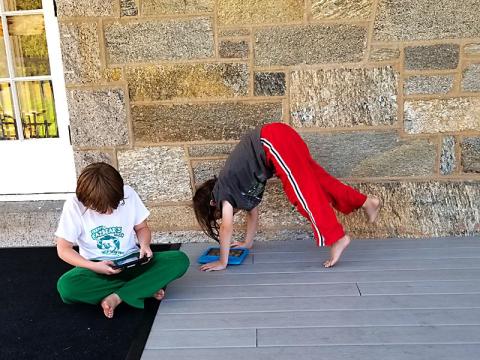 Once again, schools reverse the process, and vitiate the concept. The dominant message of our educational system is that in order to learn something, there must be a teacher who will provide you a “class” that enables you to learn it. For schools, the learning that counts is the learning that is taught – and not just by anybody, but by particular “experts” who have themselves been taught how to teach learners and have received certificates from special schools, and from the state, attesting that they are the particular people from whom children should learn. Overlooked is the obvious contradiction between becoming a life-long learner and being told throughout your childhood that you need teachers and classes in order to learn.

Or, to touch on a less abstract theme, consider the enormous effort being put forth to keep children from becoming dependent on controlled substances. There are classes, seminars, inspirational talks given by former addicts, advertisements, threats of punishment, a host of different approaches used by our schools to convey the message that abusing drugs is dangerous, unhealthy, and self-destructive (to say nothing of being illegal and subject to punishment). Although the motto “Just say no” is much ridiculed, the gist of what children are taught is precisely that: psychoactive drugs are harmful in all sorts of short-term and long-term ways, and should be avoided.

That is all well and good, until we look at the other message the schools convey at one and the same time – namely, that the appropriate way for schools and parents to deal with children who exhibit behavior that deviates from abstract norms established by educational and psychological “experts” (that term again!) is to administer one or more drugs to those children, in order to render their behavior “acceptable”. And woe to the child, or the parent, who “just says no” to these drugs when the “professionals” have demanded that they be taken. The full force of society’s legal system is brought to bear on these people, to make them conform.

Contradictions abound. Parents are told that they must play a more active role in their children’s education (for example, by helping them with their homework every day), and at the same time parents are told that they really cannot assume responsibility for their children’s education, since that is a job belonging exclusively to the State. Schools are given the task of preparing children to be good citizens in a democratic society, and yet they are the least democratic institution in existence in this country, ones in which most of the “citizens”, the students, have no real voice in determining anything of significance to their lives. And so it goes.

How can we live with these contradictions, year in and year out? How is it possible that people as intelligent, reasonable, and open-minded as we like to think we are can blithely go on supporting a logic-defying educational system in which our children spend a dozen or more of their most formative years? When will we wake up, rub our eyes, and see the absurd reality we are foisting on our children – and finally free them from its grip?

by Jay Flood
I had an interesting discussion with a five year old SVS student who was irked by something a seven year old from a traditional school had said to him, namely, that she knew more than he did because she was older and already half way through second… Read more ›
Monday, April 14, 2014

Snow tubing: A tale of patience, persistence, and pizza

by Hanna Greenberg
Sometimes what you wish for has consequences that you wished would not bother you. A case in point is the way SVS students who enrolled when they were very young tend to grow up to be persistent -- and capable of getting what they want. So, quite… Read more ›
Monday, July 4, 2016

by Lauren Ligotti
I love chocolate and eat a piece after lunch and dinner. Pretty much religiously. In the beginning of the year, I used to pack a few pieces to last me the week. Well, Dillon, Elise and Sophie quickly realized I did. They are so charming and cute I… Read more ›