What Do Kids Do at SVS? A Conversation

by Hanna Greenberg and Mikel Matisoo

What Do Kids Do at SVS? A Conversation

Hanna: A question we hear all the time is: what is a typical day like at Sudbury Valley? What do kids do here?

Mikel: Over the years there have been a lot of kids at the school, and they all have different “typical” days, and there are 180 days a year. So there's an incredible diversity of typical days.
I think most kids follow a similar pattern. The first thing they do when they get to school is look for their friends. Finding those people is very often step number one. Then they pick up on something that they were doing the day before. A lot of times I've noticed that there's a certain fashion for a particular activity that takes hold of a particular group of kids, and they'll do that for a while before gradually shifting to something else. 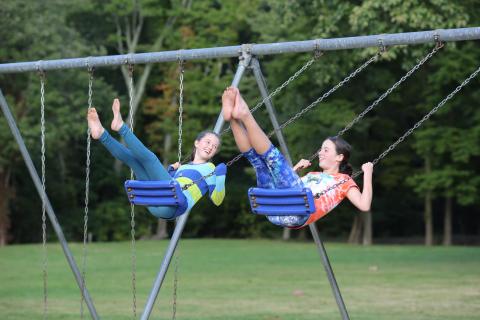 Hanna: So what kind of activities have you observed here?

Mikel: Well, some people are into sports, and what they're thinking of when they show up at school is how much fun they had in the basketball games/soccer games/ultimate Frisbee match was they played the day before, and how excited they are about doing that again. Then there are the kids who really like skateboarding, doing stuff with their bikes, scooters, nature. Others like to get out and build forts in the woods, and look for creatures – that sort of thing. One of the things human beings really love to do is talk to each other, testing their ideas with other people, floating things and listening to what other people have to say, and then refining their thoughts. I think that that's really important to people.

Hanna: And people spend quite a lot of time on screens, which scares some parents. They're constantly talking and laughing with each other as they play their games.

Mikel: One of the things that we used to talk about back in the old days, when “screens” meant “television”, was that parents were concerned that their kids' minds were going to be rotted away by watching them. What I notice a lot more often is that kids would get together and critique what they’re seeing on screens, question the motives of the people who are trying to sell them things, and talk about the implicit assumptions in the TV shows they were watching. It's similar now, for instance, with YouTube videos, that the kids spend time watching: they are really engaging in social criticism and this is just one of the forums where it's all happening now. They're perceiving the media world in which they're growing up and they're examining it, and they're critiquing it, and they are comparing notes with their friends. If you want to talk about how we're supposed to adjust to this rapidly changing world, I can't imagine any better way than that of getting together with a group of peers and taking it all apart – taking it in, and then breaking it down. It looks like kids gathered around a screen, but it's really media criticism.

Hanna: Actually, it's impossible to narrow down what kids do here, because each kid has varying days over the time they spend here. And even during the day, sometimes they can be very active, sometimes they can be very quiet and contemplative. They play music, they read, they talk. I think the major activity in the school is talking. When you ask some of our older kids, or graduates, “What did you do most of the time?”, they'll say, “Talk. Conversation was my best teacher. I listened to conversations, I participated in conversations, and that's how I learned how to clarify my thoughts and learned how to express myself better. I learned how to listen to other people and be patient and learn as much as I can from them. And I learned how to engage in fun give and take with all kinds of people, all ages and all kinds. That's what I took from this school to my adult life.”

Mikel: People talk a lot about the importance of emotional intelligence in the workplace, and about how people have a lot of trouble with that. If you ask yourself, “What would be the best place for them to learn that, and what's the process that we humans use to learn that? It's by talking. It's by exchanging. It’s by listening, and watching people's expressions while you talk, and using that feedback to assess how is this person responding to the words that I'm using. How can that be anything else but building up what we call our emotional intelligence and coming to understand how people respond to talk, to ideas, to other people?”

Mikel: I think almost any public school teacher will agree with you that the one drive that kids have almost universally is to talk to other kids, and teachers spend a lot of their energy trying to stop them from doing that.