Success Without a GPA

Success Without a GPA 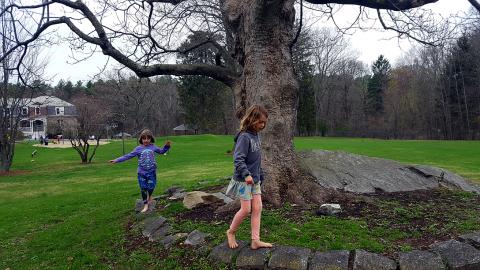 Sudbury Valley nay-sayers often point to the lack of grades and high school grade point averages as one of the great risks of sending your child to SVS.

For some it appears the lack of a GPA, and a good one at that, is akin to some sort of moral failure. I did a quick review of Dante’s Divine Comedy to see if Dante had defined a circle of hell for students without a GPA. But it turns out Dante’s writing predates the invention of the Grade Point Average by hundreds of years. In fact, it appears that systematic grading of classes in colleges and universities only began in the 19th century. Use of a grading system for elementary and high schools only began in the early 20th century. Yet effective forms of teaching and learning have obviously existed for thousands of years, long before the GPA.

For example, in 338 BC the famous philosopher Aristotle became the tutor of young Alexander the Great. Even though Aristotle failed to provide a Grade Point Average for his most famous pupil, Alexander does pretty well for himself after his schooling. He builds an empire that spans much of the known western world and founds what became one of the world’s most famous libraries in Alexandria, Egypt.

Hundreds of Sudbury Valley School students have gone on to college and found successful careers without having a high school GPA. SVS students routinely meet the challenges of the college application process. Often it requires that the student explain a little about how SVS works, and this is often where SVS students shine. They can articulate the nature and value of their education in a manner that can make them stand out in a positive way when applying to college. In this way they turn the apparent disadvantage of not having a GPA to an advantage.

Each student’s story of dealing with the distinctive aspects of SVS in the college admissions process is no doubt unique. Below I provide my daughter’s experience to date as an example of life without a high school GPA.

A little over a year ago we were first called upon to produce a grade point average for our oldest daughter. Cori wanted to try out a class at Mass Bay Community College (MBCC), which is just ¼ mile from our home. They have a program to allow kids still in high school to sign up for classes assuming their high school says its OK and that the student has a 2.5 cumulative GPA. I forwarded the form to the staff at SVS, and they graciously filled it out explaining that SVS gave no formal grades, but that Cori was a student in good standing. This was sufficient to meet the enrollment requirement and Cori was able to take classes at Mass Bay.

This summer we had our second encounter with the need for a GPA. Cori passed her road test and got her license. As every parent of a teenager knows, adding a teen to your car insurance increases your costs substantially. My wife and I were hunting for ways to minimize the increased cost and Linda found that some insurance companies offer a “Good Student Discount”. Sure enough, our company offered one of these. Guess how the insurance companies measure who is and who is not a good student? You guessed it: GPA.

Turns out that for us, being able to produce a good GPA would save us about $300 (per year of new teen driving). Lucky for us a printed transcript for my daughter’s classes at Mass Bay Community College (with a 3.94 GPA) proved adequate to get us the “Good Student Discount”.

I found it somewhat ironic, that those who question the wisdom of going to a school that does not provide a GPA, argue that the costs of doing so are long term, while the only cost we encountered so far was very immediate and short term.

Besides being relieved that we could get a discount on our car insurance, I was intrigued by what it means that the insurance industry has decided that it makes business sense to grant discounts to students with good GPAs. I am sure that the industry did their research and found that good GPAs correlated with better driving records for young teens. What does this say about what a GPA is measuring? I don’t believe there is any reason to believe high academic abilities, complex math, abstract thinking, or even the more mundane measures like the ability to remember the Kings and Queens of England have any bearing on your ability to drive safely. Was Alexander the Great’s ability to drive a chariot linked to his ability to learn from Aristotle’s lectures? I doubt it. I think that it is just another indication that grades are more a measure of student “compliance” than academic abilities. Compliance, it can be argued, may be a useful trait in the context of driving safely. As a surrogate measure of compliance, I can understand why insurance companies would provide discounts to students with “good” GPAs.

However, in the context of education, since we have exited the industrial age and entered the information age, compliance is no longer the critical attribute for youth to learn on their voyage to adulthood. They are no longer destined for factory jobs, where compliance was a necessary asset. The problems of today and tomorrow require creative independent thinkers who can work together in teams. This is just the kind of citizens SVS students become!

Students with an SVS education may not have grade point averages or even grades, but for over 50 years the school has been producing graduates who are prepared to conquer the world.