Maybe my memory is foggy but never do I remember the ice on our pond being as perfect as it was the week of January 6. On Tuesday, we were all, young and old, stuck inside as the “polar vortex” kept the wind chill dangerous.

The next day was still horrifically cold in the early morning, which suited the course of events just fine! Mikel came at 10:30 and, in his own very careful and deliberate way, began testing the ice thickness in several spots, as we do before opening the ice to traffic. He has a wonderful drill to do it with, all the right clothing to keep from freezing into an icicle, and only fell once -- coming back indoors! As the wind chill warmed up to zero degrees, he finished preparations, putting up ropes designating the safe area. The sign outside saying “Keep Off the Ice” had to be flipped over, and the inside sign turned to “The Ice Is Safe" side.

Then the building exploded! First of all, we haven't had any real ice for several years. Second, we have never in the whole history of the school had better ice -- thick and smooth and as unbumpy as a pond could be. And enormous -- the area in use was bigger than I ever remember. Everyone was ecstatic. The first day there was "only" sliding around on foot, on sleds, and sliding or sledding onto the ice. But everyone was happy! Wee children, grumpy grownups, teens -- we were all in heaven. The area at the far shore was available for exploration too, at long last.

By day two, Thursday, the equipment began to arrive. Skates. Hockey sticks. Pucks. More sophisticated sliding devices. And there was SO MUCH SPACE.

By day three, Friday, a group of kids were making a hockey arena. I don't think the Bruins have a better rink! There were children who went out in the morning and didn't come in until . . .

Meanwhile, “wedding invitations” appeared, for an event to take place at 1:30. The details were laid out. One should be there on time, or not at all. The groom was familiar, but it was rumored that he had been “divorced” since Tuesday. The bride was new. She appeared in a wedding dress! Do 10 year olds really have wedding dresses?? Several flower girls appeared in formal garb, as did a maid of honor, bridesmaids, a bunch of groomsmen, a father of the bride, and an official to perform the ceremony in a long black robe and a long blond beard. 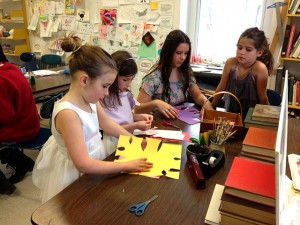 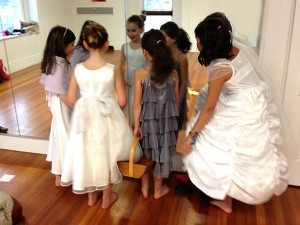 The flower girls made many-colored paper rose petals in the art room. A groomsman kept the dance room clear of spectators until the 1:15 starting time. Meanwhile, at about 1:00, most of the kids drifted off the ice. Where were they all going? To have lunch quickly and then to the wedding of course! Almost everyone in school attended. (By the way, the same kids who don't notice what time it is at the end of the school day and keep their rides waiting, or have to be hunted through the school, had no trouble being in their seats before 1:30!) Most of us didn't stop smiling with the happiness that our own little society generates.

The ceremony was conducted perfectly. There was a ring-bearer with rings. The bride and groom, quite adorable, were told at the completion, "you may now hug each other." General applause. And then the bouquet was thrown. An unsuspecting boy caught it. He was shocked. The room exploded with applause (again). Then everyone left. Except for two teen age boys, the School Meeting Chairman Emeritus and the Law Clerk, who appeared with dust pans and brooms -- oh those flower petals! Later, several hours later, there were three kids playing with "swords" a little too loudly. One was the boy who had caught the bouquet. It was taped to his sword.

There was no cake, but stowed in the office was the largest box of candy ever, just waiting (only since December 20) for the right occasion. We had it!

Note: More wedding pictures are available on our Facebook page.

by Foss Tighe
While I was reading Daniel Greenberg's essay (“Are 1000 Pictures Worth One Word?”) on why it has been so difficult to convey the SVS experience in film and pictures, I found myself thinking about the evolution of my own understanding about what… Read more ›
Monday, September 28, 2015

by Lauren Ligotti
Food serves as a major aspect of life at SVS. Of course, everyone in the world loves food; however, here it takes on a life of its own. The minute students arrive, they are eating or talking about food. Trading and sharing food items are a daily… Read more ›
Monday, November 9, 2015

by Hanna Greenberg
Age mixing is a constant phenomenon at school. We see it so much that it is not remarkable to us any longer. However, at the annual Halloween dance the “mixing” is part of the fun, and is obvious for all to see. For me, it is still amazing to watch… Read more ›